• Ch-Ch-Ch-Ch-Changes: The Washington Nationals dropped three games in a row in Miller Park last season in a series which led to Jayson Werth calling for "changes" to the way things were done in the nation's capital on the field and in the Nats' clubhouse. The Nationals got swept in a three-game series in Milwaukee in 2010 as well. The Nationals haven't won a game in the Brewers' home park since July 28, 2009 when the Nats took their second-straight in a four-game set which the two teams eventually split. Nats' right-hander Edwin Jackson took the mound in Miller Park after Milwaukee right-hander Yovani Gallardo threw a 12-pitch, 1-2-3 top of the first tonight and threw a scoreless inning of his own, retiring the Brewers' first three batters in order on eleven pitches. Ryan Braun K'd swinging at the 11th pitch of the inning. 0-0 after one.

• LaRoche And Lombo: Yovani Gallardo's 13th pitch of the night and the first pitch of the second was a 90 mph four-seamer that Adam LaRoche launched over the Southwest.com sign on Miller Park's right field wall for a solo HR and a 1-0 lead. HR no.19 of 2012 for the Nationals' first baseman. Gallardo walked Roger Bernadina with two down in the top of the frame, gave up a single by Jesus Flores and then walked E-Jax to load the bases for Steve Lombardozzi, who took a 1-2 curve by first and into the right field corner for a base-clearing triple and a 4-0 Nats' lead after one and a half in Milwaukee. Lombardozzi's first triple of the year. Gallardo threw 34 pitches in the top of the second, 23 of them after he'd recorded two outs. 46 pitches total after two...

• E-Jax Attacks: Aramis Ramirez and Corey Hart hit back-to-back singles off E-Jax in the Brewers' second, but the Nats' right-hander retired the next three batters to complete a scoreless second on 16 pitches. 27 pitches through 2.0 IP for Jackson. Yovani Gallardo needed just 13 pitches, nine of them to Ryan Zimmerman, to retire the Nationals in order in the top of the third. Edwin Jackson got a called strike three on the opposing pitcher for out no.1 and K no.3 in the Brewers' half of the inning, and got groundouts from Norichika Aoki and Nyjer Morgan in a 14-pitch, 1-2-3 frame that had the Nats' starter at 41 pitches overall after three scoreless. Six in a row set down by E-Jax.

• E-Jax Doesn't Sweat Base Runners: Yovani Gallardo threw a 10-pitch, 1-2-3 top of the fourth. Edwin Jackson gave up Aramis Ramirez's 33rd double of 2012 on a line drive to the left of center and off the base of the wall with one down in the Brewers' second. E-Jax put two on with one out when he walked Corey Hart in the next AB, but a force at second on a Rickie Weeks' grounder made it first and third with two down and a Jonathan Lucroy fly to center ended Jackson's fourth scoreless frame after 19 pitches. 60 pitches in 4.0 scoreless.

• 1st-to-3rd™: Edwin Jackson singled to start the Nationals' 5th, then went first-to-third™ on a one-out Bryce Harper hit to right. Ryan Zimmerman stepped in with runners on the corners, and lined another single to right field to bring E-Jax in and make it 5-0 Nats. Harper went first-to-third™ on Zim's hit. An RBI groundout to first by Adam LaRoche brought Harper in and made it 6-0 and an RBI single by Michael Morse brought Zimmerman around to make it 7-0 before Gallardo could get out of the fifth. 7 H, 7 R, 7 ER, 99 pitches in 5.0 IP. Edwin Jackson started the fifth at 60 pitches. Gallardo stayed in to hit though he was likely done for the night and doubled to center with one down. One out later, a grounder back to the mound by Nyjer Morgan bounced off Jackson's arm for an infield single that put runners on first and third for Ryan Braun, but E-Jax popped Braun up to end his fifth scoreless inning after 12 pitches at 72 overall.

• eMb: After 10 seasons in the minors, Montreal Expos' 03 26th Round pick Jim Henderson made his MLB debut for the Brewers in the top of the sixth, retiring the first three batters he faced in the majors in a nine-pitch inning. Rickie Weeks doubled with two down in the Brewers' sixth, and would have scored from second had a Jonathan Lucroy single not bounced off the second base bag and right two Nats' infielder Steve Lombardozzi. Weeks was held at third, and a rangy play in short right by the Nationals' second baseman on a groundout by Cesar Izturis in the next at bat ended E-Jax sixth scoreless after 16 pitches with Jackson at 88 pitches overall.

• 1st-to-3rd Again: Ryan Zimmerman walked with two down in the Nationals' seventh. Brewers' reliever Tyler Thornburg then gave up back-to-back singles by Adam LaRoche and Michael Morse with Zim going first-to-third™ on LaRoche's hit before scoring on Morse's RBI grounder through the left side of Milwaukee's infield. 8-0 Nationals after six and a half. Backup Brewers' backstop Martin Maldonado singled to start the bottom of the seventh. Norichika Aoki grounded into what should have been a double play, but Danny Espinosa sailed the throw to first. E:6. Aoki to second. Nyjer Morgan popped out unproductively for out no.2 and Braun was 0 for 4 tonight after he did the same. 8-0 Nationals after seven.

• Davey And H-Rod: After the Nationals came up empty in the top of the eighth, Henry "Lightning" Rodriguez came out for another inning of work. After recording two quick outs, Rodriguez hit Rickie Weeks in front of Carlos Gomez, whose two-out, two-run HR to center broke up the shutout. Gomez's 8th. 8-2 game after eight in MIller Park. Kameron Loe completed his second scoreless frame in relief in the top of the ninth. Michael Gonzalez came on to end it in the bottom of the frame. Martin Maldonado took a called strike three. Norichika Aoki walked with one down. Roger "The Shark" Bernadina dove after sprinting to left-center and made the catch to rob Nyjer Morgan of a potential RBI and extra-base hit. Two down. Gonzalez got Travis Ishikawa swinging to end it.

The Nationals win their sixth-straight. The Brewers lose their seventh. E-Jax gets the win. 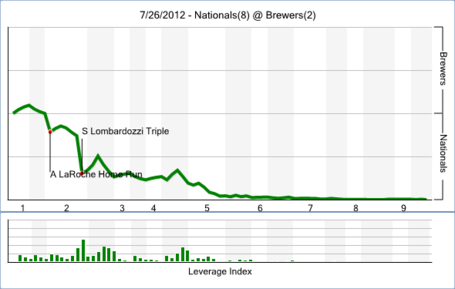