Wisconsin's Own Jordan Zimmermann Leads Washington Nationals To 4-1 Win Over The Milwaukee Brewers.

Share All sharing options for: Wisconsin's Own Jordan Zimmermann Leads Washington Nationals To 4-1 Win Over The Milwaukee Brewers.

• Zimmermann, Jordan: Last time out in New York, 26-year-old Nats' starter Jordan Zimmermann allowed just one run in 6.0 IP over which he gave up four hits total and recorded six K's. The Auburndale, Wisconsin-born pitcher's strong outing continued a streak of twenty-straight starts this year in which he's gone at least 6.0 IP. The '07 2nd Round pick, who hasn't lost a start since June 22nd in Baltimore, has won four of his last six outings with the Nationals 5-1 over that stretch, and he's posted a 0.95 ERA with six walks (1.42 BB/9) and 26 K's (6.16 K/9) in 38.0 IP over that period, lowering his 2012 ERA from 2.77 to 2.31 in the process. Before tonight, that was good for the fourth-lowest ERA in the National League. Nats' skipper Davey Johnson was impressed with what he saw from Zimmermann in that Citi Field start even though the pitcher received no decision in a game the Nats eventually won 8-2 in extra innings.

"Jordan was his usual self," the Nats' skipper said, "Pitched a great ballgame, [but] the offense didn't wake until the rain stopped about the seventh inning or eighth inning. But another great outing by Jordan, it was just a shame we couldn't save it for him." Zimmermann left that game in New York with 2-1 lead, but reliever Michael Gonzalez gave up a game-tying home run in the bottom of the seventh. Though Zimmermann was only at 89 pitches after 6.0 IP, his manager decided that was enough. "I'm not going to push Jordan at this point in time in the season," Johnson said, "He gave me six good innings and that was fine for me."

Though the Nationals' 69-year-old manager didn't want to go into specifics as to why he was pulling his starter early, Johnson did say that his decision was in part made with the rest of the season in mind. "I don't want to get into specifics for all my reasons why I do things," he said, "But it was the best thing for him and the best thing for the ballclub that he departed after six."

Did Jordan Zimmermann and the Nats win?

• Milwaukee Bears vs Homestead Grays: Bears/Brewers' left-hander Randy Wolf gave up a two-out walk to the Nationals/Grays' Ryan Zimmerman in the top of the first, but the veteran starter got a grounder back to the mound from Michael Morse to end the opening frame after 17 pitches. No.27 in gray, Jordan Zimmermann, battled Norichika Aoki for seven pitches to get a groundout to short for the first out of the home-half of the inning. Zimmermann threw a 96 mph 2-2 fastball by Carlos Gomez and got Ryan Braun swinging with an 0-2 heater in a 16-pitch, 1-2-3 first. Wolf threw just 10 pitches in a 1-2-3 second against the Nats in which he retired Adam LaRoche, Tyler Moore and Jesus Flores in order. A 95 mph 0-2 fastball got a fly to right from Aramis Ramirez. Corey Hart K'd chasing a 2-2 slider. Rickie Weeks, however, was able to get hold of a 96 mph 2-2 four-seamer and he sent a line drive out to the right-center gap for his 20th double of the year, but a groundout to short by Brewers' backstop Martin Maldonado ended a 17-pitch second by the Nats' right-hander. 0-0 in Milwaukee.

• The Pride Of Auburndale, WI: Wolf threw an 11-pitch, 1-2-3 second, striking out Zimmermann and Danny Espinosa to end his third scoreless frame. After the Nats' starter struck Cody Ransom out with an 0-2 fastball, he tried to bust the Brewers' left-handed hitting and throwing pitcher inside and gave up a one-out single to left when Randy Wolf hit a 95 mph 1-2 four-seamer to the opposite field. Norichika Aoki sent what could have been a DP grounder back up the middle in the next at bat, but it bounced off the rosin bag behind the mound and slowed down enough that there was no play for Nats' SS Danny Espinosa. Two on, 1 one out. Carlos Gomez bunted both runners over, giving away an out and Ryan Braun grounded out to third to end a 14-pitch frame. Still no score.

• Chiefs! Chiefs! Chiefs!: Corey Brown was 0 for 1 tonight, and 0 for 11 overall ten games into his Major League career when he stepped to the plate in the top of the fourth and hit a 1-1 curve from Randy Wolf to left-center for an oppo-boppo blast, his first major league hit and his first major league home run. The 26-year-old A's '07 1st Round pick (59th overall), acquired along with RHP Henry Rodriguez in the deal that sent Josh Willingham to Oakland, has a .300/.384/.559 line at Triple-A Syracuse this season, with 19 doubles and 21 HR's and he now has 22 HR's overall on the year. 1-0 Nats on Brown's first HR for Washington. Tyler Moore, who's hit 31 HR's in each of his last two seasons in the Nats' system, had nine HR's in 29 games and 115 plate appearances at Triple-A this year, and five in the Nationals' lineup before he hit the second home run of the inning two outs after Brown's. Adam LaRoche comes around to score on Moore's sixth after singling his own way on. 3-0 Nationals after three and a half in Miller Park. 29-pitch inning for Wolf.

• Zimmermann Surrenders Run, Wisconsinites Shocked: Aramis Ramirez hit his 35th double of the year off the right-center wall after battling Jordan Zimmermann for nine pitches in the first at bat of the Brewers' fourth. A broken bat groundout to second by Corey Hart moved Ramirez over to third, and a Rickie Weeks single brought him home to make it a 3-1 game in the Nats' favor. Weeks, 2 for 2, took an 0-1 fastball through the right side of the infield and moved into scoring position himself on a one-out walk to Martin Maldonado. Zimmermann got a visit from pitching coach Steve McCatty then got a 5-4-3 inning-ending DP out of Cody Ransom to end a 26-pitch frame. 3-1 Nats after four.

• TKCHZ!!: Jordan Zimmermann got his three-run lead back when Ryan Zimmerman sent a solo shot to straight-center on a 90 mph first pitch fastball from Randy Wolf in the Nationals fifth. The two-out blast was Zimmerman's 15th, and it went 400ft+ and out to Miller Park's batter's eye, over a leaping Carlos Gomez. 4-1 Nationals after four and a half. Jordan Zimmermann needed 11 pitches to retire the Brewers in order in the bottom the fifth, collecting his 5th K along the way and completing five innings on 85 pitches overall.

• MOAR MOORE: Tyler Moore beat out a sharp grounder to third, arriving just ahead of a throw over from Aramis Ramirez, who made a nice backhand play and strong toss. Randy Wolf got groundouts from Jesus Flores and Steve Lombardozzi though, and ended the top of the sixth at 89 pitches overall after an 11-pitch frame. Ryan Braun K'd swinging at a 93 mph 1-2 four-seamer. Aramis Ramirez popped out on the first pitch he saw. Corey Hart grounded out to short. An eight-pitch, 1-2-3 sixth for Zimmermann has him up to 93 P. He's done.

• Storen Warning?: Randy Wolf gave up a one-out single by Danny Espinosa, but one out later struck Ryan Zimmerman out to end a 16-pitch inning at 105 pitches overall on the night. Still 4-1 Nationals. Drew Storen took over in the seventh, putting Rickie Weeks on with a HBP on the left elbow. Three outs later Storen was through a scoreless inning of work in relief with the help of a slick play at third by Ryan Zimmmerman, who robbed pinch hitter Jonathan Lucroy of an extra base hit with a diving stab. 12-pitch inning for Storen, still 4-1 Nationals.

• eMb: Brewers' reliever and former Expos' prospect Jim Henderson gave up a one-out Adam LaRoche single, but nothing else in a scoreless top of the eighth. Sean Burnett retired the first two batters he faced before surrendering an opposite field single by Ryan Braun, who'd gone 0 for 3 tonight before that hit. Aramis Ramirez's fly ball to Roger Bernadina in right ended an 11-pitch inning by the Nationals' lefty. Brewers' right-hander Kameron Loe gave up leadoff single by Steve Lombardozzi in the Nats' ninth, but Lombo was stranded at third three outs later in what was still a three-run game. 4-1 Nationals after eight and a half.

Tonight's game thread: JZ's back... and he's mad as heck. 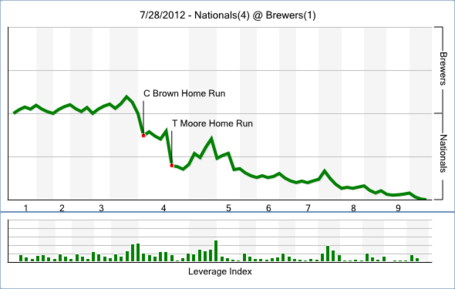