Share All sharing options for: Washington Nationals Keep Coming Back, Beat Milwaukee Brewers 11-10 In Extras To Take Three of Four In Miller Park.

• Nats vs Not-Greinke: Davey Johnson told reporters earlier in this series that he didn't think his Washington Nationals would see now-former Milwaukee Brewers' starter Zack Greinke in the finale of the four-game set in Wisconsin's Miller Park. The former Cy Young Award-winning Kansas City Royals' right-hander is starting for the Los Angeles Angels today. In Greinke's place for the Brewers' was 26-year-old '04 1st Rounder Mark Rogers, who's made four major league starts before this afternoon's, the last one back in 2010. Since then injuries, surgery and disciplinary action have combined to keep the right-hander off of a major league mound, but he returned to Milwaukee today, and surrendered a solo home by Steve Lombardozzi in the first at bat of the game. The Nats' 23-year-old infielder took a 3-1 fastball from Rogers to right and into the second deck for his second home run of 2012 and a 1-0 Nationals' lead over the Brewers early in the Sunday matinee.

• #Chatteronthemound: Brewers' outfielder Carlos Gomez doubled, sending a low line drive by third on a 79 mph 2-1 curve from Gio Gonzalez in the bottom of the first. Gomez's 10th double of 2012 was followed by a groundout by Ryan Braun, a HBP on Corey Hart and a two-out walk to Rickie Weeks that loaded the bases with two outs and pushed the Nats' starter up to 18 pitches in the home-half of the first. Gonzalez missed with 2-1 fastball inside to Jonathan Lucroy in the next at bat, and was animated, clearly upset with the way the inning was going, and he missed with a 3-1 fastball outside to walk in the tying run. 1-1. A grounder back to the mound by Cody Ransom bounced off Gio's glove and fell in unplayable in the grass behind the mound. 2-1 Brewers. 26 pitches for Gio Gonzalez to get through the first.

• Lumber: Mark Rogers retired the Nationals in order on ten pitches in the top of the second. Gio Gonzalez got the opposing pitcher looking with a 1-2 fastball for the first out of the Brewers' second. Michael Morse almost misjudged a line drive to left by Norichika Aoki, but made a last-second leaping grab and Bryce Harper closed his glove on the second, catching a pop to right by Carlos Gomez that ended an 11-pitch frame by the Nats' lefty. Steve Lombardozzi homered to start the game, and was 2 for 2 today after he reached safely on a swinging two-out bunt back to the mound in the Nationals' third, but he was stranded there when Bryce Harper K'd swinging to end the top of the inning.

• Morse's Arm: Ryan Braun took a four-pitch walk to start bottom of the third, then scored from third as Corey Hart got caught in a rundown after singling on a line drive to left. Braun took third on Michael Morse's arm, then waited for his opportunity to score as Ryan Zimmerman cut Morse's weak throw in and ran Hart down. 3-1 Milwaukee. Jonathan Lucroy fouled a ball off Jesus Flores' shoulder, then lined to left for a two-out single, but Cody Ransom K'd swinging to end the third. A 21-pitch inning by Gio Gonzalez had the lefty up to 59 pitches overall.

• Back Tightness: Adam LaRoche went the other way with a 96 mph 1-1 fastball outside, lining to left for a one-out single in the Nationals' fourth. A 95 mph 2-1 heater inside from Brewers' starter Mark Rogers caught Michael Morse on the elbow, putting two runners on with one out, but Danny Espinosa K'd swinging at a 96 mph fastball outside and Roger Berndina K'd swinging at a full-count slider to end a 19-pitch inning by Milwaukee's right-hander. LaRoche left the game after the fourth, replaced at first by Tyler Moore. Gio Gonzalez retired the eight and nine batters in the Brewers' order, but hit Norichika Aoki to put a runner on with two down before Carlos Gomez grounded into a force at second to end the inning after 11 pitches from Gonzalez.

• Good Gio Innings: Gio Gonzalez singled with one down in the Nationals' fifth, but was erased on a force at second on a Steve Lombardozzi grounder to short. Bryce Harper (0 for 2, K) stepped in with a runner on and two out and K'd swinging at a 96 mph full-count fastball outside on the eighth pitch of the at bat with the Brewers' starter. Gio Gonzalez needed nine pitches total to get through the bottom of the inning with the ninth pitch a 94 mph full-count fastball to Rickie Weeks that was called strike three by home plate umpire Mike Estabrook. Finally Gio and Mike agree on a call. The nine-pitch inning had Gonzalez up to 78 pitches after five. Still 3-1 Milwaukee.

• A leadoff single by Jonathan Lucroy and a four-pitch walk to Cody Ransom put two on for Cesar Izturis, who bunted bother runners over/gave up an out. Pinch hitter Aramis Ramirez stepped in with first base open so he was intentionally walked to load the bases and a surprise bunt by Norichika Aoki caught everyone off guard, allowing a run to score as Aoki reached safely on a blown call by first base ump Tim Welk. So the bases were still loaded for Carlos Gomez, whose sac fly to center brought in another run. 5-2 Brewers. 20-pitch inning for Gio Gonzalez has him up to 98 pitches.

• Rally On Livan?: Corey Brown, hitting for Gio, and Steve Lombardozzi both went the other way for back-to-back singles off Brewers' right-hander Livan Hernandez in the top of the seventh. Bryce Harper took a 3-1 curve for ball four and walked to load the bases in front of Ryan Zimmerman. Zim (who was 7 for 25 w/ 2 doubles and 2 HR's vs Livan in his career) grounded to third where Cody Ransom started a 5-3 DP, but a run scored to make it 5-3 Milwaukee. A fly to right by Tyler Moore ended the inning. Two-run lead for the Brewers in the seventh.

• [CHOMP!]: Make that a four-run lead. Ryan Mattheus took over in the bottom of the seventh and gave up back-to-back hits by Corey Hart, who singled, and Rickie Weeks, who homered to center. Two-run blast. 7-3 Brewers. Weeks' 11th HR of 2012. Milwaukee reliever Francisco "K-Rod" Rodriguez gave up a seven-pitch, leadoff walk to Michael Morse in the top of the eighth and one out later (after Espinosa K'd swinging), Roger "The Shark" Bernadina took K-Rod deep to left-center for a two-run blast that made it a 7-5 game in Milwaukee's favor. A line drive to center by Jesus Flores ended K-Rod's day. Flores took third when Corey Brown lined a 2-1 fastball to right for his first double of the year and scored when Steve Lombardozzi grounded out to the right side. 7-6 game. A wild pitch by Axford with Harper up brought Brown in from third and tied it at 7-7 after seven and a half.

• Mattheus Comes Back, So Do Brewers: The tie lasted all of four pitches as Brewers' outfielder Norichika Aoki hit a one-out home run to right field on an 0-1 fastball from Mattheus. Aoki's sixth sailed out to right and Carlos Gomez followed with a home run of his own to center field in the next at bat to quickly make it a 9-7 game with one down in the eighth. A two-out double to left ended Mattheus' day after 1.2 IP, 5 H, 4 R, 4 ER, 0 BB, 0 K, 3 HR's. 9-7 Milwaukee after eight.

• Last Chance: John Axford came back out for the ninth. Ryan Zimmerman K'd swinging at a high fastball for out no.1. Pinch hitter Mark DeRosa walked with one down and Michael Morse ... took a 96 mph 0-2 fastball all the way the other way for a line drive HR to right! 9-9 on Morse's 8th. Axford blows the lead. It's tied at 9-9 after eight and a half. Craig Stammen came back for the bottom of the ninth and retired the side in order to send it to extra innings.

• FREE BASEBALL!!: Milwaukee right-hander Jose Veras threw a nine-pitch 1-2-3 10th. Davey Johnson stuck with Craig Stammen for the bottom of the inning. The Nats' right-hander got Norichika Aoki swinging, got a groundout from Carlos Gomez and a second K from Ryan Braun in a 12-pitch, 1-2-3 10th. Still 9-9. Bryce Harper led off the eleventh against Veras with a walk, then went first-to-third™ on a single to right by Ryan Zimmerman. Mark DeRosa K'd looking at a two-strike slider inside for out no.1, but Michael Morse came through again, lining to left to score Harper and Zim and make it an 11-9 game in the eleventh. Morse took third on an Espinosa single to center. Roger Bernadina walked to load the bases with one down. Kameron Loe came on for Milwaukee. Jesus Flores K'd on a check-swing strike three and Corey Brown flew to left to end the top of the inning.

• Clipp'd?: Tyler Clippard came on for the bottom of the eleventh looking for save no. 20 of 2012 and gave up a leadoff home run to straight center by Corey Hart. 11-10 on Hart's 19th. Rickie Weeks K'd looking at a 2-2 change for out no.1. Nyjer Morgan got thrown out by Danny Espinosa on a diving play at short. TWO!! Cody Ransom worked the count full and walked with two down, but Cesar Izturis popped up to Michael Morse in foul territory to end it. 11-10 final. Nats take three of four from Milwaukee. 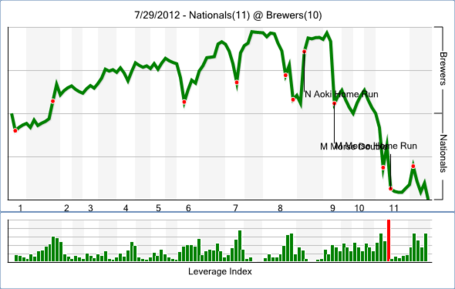