• Two N's: 26-year-old Washington Nationals' right-hander Jordan Zimmermann missed with a 1-2 fastball upstairs, or tried to get San Francisco leadoff man Gregor Blanco to chase one out of the zone. Either way it was ball two, but Zimmermann shook his head like he lost control. The Giants' outfielder wasn't biting on the heater, and he waited on the hanging 2-2 curve that followed from the Nats' starter sending a low liner through the right side of the infield for a single to start the first game of three for San Francisco in D.C. Blanco stole second on Nationals' catcher Jesus Flores a pitch before Ryan Theriot K'd swinging at an 0-2 slider that dove away from his bat and Zimmermann got back-to-back groundouts to Adam LaRoche from Melky Cabrera and Buster Posey to end a 12-pitch first in the nation's capital.

• #LomboLobby: Steve Lombardozzi started the Nats' first with a single up the middle that Giants' shortstop Brandon Crawford couldn't knock down. Lombardozzi stole his second base of the year on a breaking ball in the dirt from Giants' right-hander Tim Lincecum to Bryce Harper, but Harper popped to short left unproductively one pitch later and Ryan Zimmerman and Michael Morse went down swinging to end a 21-pitch first by San Francisco's "freakishly"-talented right-hander...

• Kung Fu Whatda?: All-Star Giants' third baseman Pablo Sandoval got a grounder under a diving Danny Espinosa at second and hustled out of the box to take an extra base for a leadoff double off Jordan Zimmermann in San Francisco's second. Angel Pagan followed Sandoval's 12th double up with an unproductive pop out to Ryan Zimmerman at third. Zimmermann got out no.2 on a swinging K when he busted Hector Sanchez inside with a 2-2 slider the Giants' catcher had no chance of hitting and then got a fly to left from Brandon Crawford to end a 21-pitch top of the second. Still 0-0 in Nats Park.

• IASDIMH: Ian Desmond looked bad chasing a 1-0 fastball up high in the zone from Lincecum, then he connected with a 1-1 curve and sent a leadoff single through Giants' shortstop Brandon Crawford. Danny Espinosa, from the left side, connected with 2-1 change and just missed hitting his seventh home run of 2012, settling for an RBI double that bounced off the wall and off San Francisco center fielder Angel Pagan's hands allowing Desmond to score from first for a 1-0 Nats' lead. Espinosa's 19th double. Jordan Zimmermann hit his second-two-bagger of 2012 one out later and brought Espinosa around for a DIY two-run lead. Tim Lincecum needed 24 pitches to get through the second, and the 28-year-old right-hander was up to 45 pitches and down 2-0 after 2.0 innings in the nation's capital on a night that the temperature was in the mid-90's.

• MOTL Thunder: Ryan Zimmerman ripped a one-out single by a diving Pablo Sandoval at third and into left for his first hit of the night in two at bats, and his second hit in nine at bats against Tim Lincecum in their respective careers. Zim was running on a Michael Morse groundout to short, so he arrived safely at second on what could have been a GiDP and Zim then scored on Adam LaRoche's 19th double of the year. 3-0. LaRoche bounced a 90 mph 1-1 two-seamer from Lincecum off the center field wall. Ian Desmond then stepped in and put a charge in an 0-1 slider from Lincecum that landed twenty rows back in the left field stands. Two-run blast. 5-0 Nats on their All-Star shortstop's 14th HR of 2012. Danny Espinosa singled off Lincecum for the third-straight two-out hit, then stole second and third before Jesus Flores flew out to end the Nats' big inning. 26-pitch third for the Giants' starter, 71 pitches after three.

• 8-Count-'em-8 Runs: Melky Cabrera doubled for the 17th time this season to start the Giants' fourth. Buster Posey battled for eight pitches before he K'd chasing a slider out of the zone low for out no.1 and K no. four for Jordan Zimmermann. Pablo Sandoval rolled a weak grounder out to Danny Espinosa at second for out no.2 and Angel Pagan flew to left to end an 18-pitch 4th, after which Zimmermann was at 60 pitches overall.

After giving up a one-out walk to Steve Lombardozzi, double no. 13 of 2012 by Harper and a base-loading base on balls to Ryan Zimmerman, Tim Lincecum was up to 87 pitches and done for the night, down 5-0 with three runners on when Giants' reliever George Kontos came on. Michael Morse was down 0-2 quickly, but he singled to center on a two-strike slider to bring two more runs in, and the throw in from center by Gregor Blanco was weak and off line so Zimmerman took third and then scored on an Adam LaRoche sac fly. 8-0 Nats after four.

• E: 5 = Runs: Ryan Zimmerman had a minute to think about throwing to first after fielding weak grounder to third off Pablo Sandoval's bat, but the Nats' third baseman bounced the overhand toss to first and Adam LaRoche couldn't stab it. E:5, Zimmerman's sixth and the leadoff runner was on in the Giants' fifth. Brandon Crawford singled to left on a line drive in the next at bat and Nate Schierholtz was the third straight San Francisco batter to reach when he singled to center to load the bases with no one down. Zimmermann sawed Gregor Blanco's bat in half with a 94 mph 1-0 fastball, but the resultant pop to right fell in for a two-run single that got the Giants on the board and made it 8-2 Nats. Ryan Theriot popped unproductively to right for out no.1. A filthy 0-2 curve got out no.2 and K no. 5 of the night and a fly to Michael Morse in left ended a 22-pitch 5th for Zimmermann.

• 8:57 pm EDT Delay: Jordan Zimmermann reached base on a two-out error in the Nationals' fifth but was stranded at first. The Nats' right-hander needed just 11 pitches to retire Giants in order in the sixth, after which he was up to 93 pitches overall in his 16th start of 2012. Giants' right-hander Clay Hensley needed seven pitches to retire the Nationals in order in the home-half of the frame. It started to pour on Jordan Zimmermann in the first at bat in the seventh, with an expected thunder storm finally reaching the park. Brandon Crawford singled to left to start the inning, but the game went into a delay at 8:57 pm EDT...

• PLAY BALL!!: At 10:20 pm EDT the two teams resumed play with a runner (Brandon Crawford) on first and Ryan Mattheus on the mound for the Nationals against Nate Schierholtz. Schieholtz K'd swinging, but Gregor Blanco singled on a line drive to right to put two on with one out. A 1-1 two-seamer to Ryan Theriot got Mattheus the double play he wanted, however, and Ian Desmond, Danny Espinosa and Adam LaRoche turned the inning-ending 4-6-3. 8-2 Nationals after six and a half. Brad Penny retired the first two batters he faced in the bottom of the seventh before Danny Espinosa collected third hit in four at bats, singling to center, but Jesus Flores grounded out to end the seventh. Still 8-2.

• D.C.'s Own: Mattheus came back out for the eighth, giving up a one-out walk to Joaquin Arias and a single by D.C.'s own Emmanuel Burriss to put runners on first and third in the Giants' eighth. Steve Lombardozzi made a sliding catch in left on a sliced liner by Brandon Belt. Arias scored on what ended up a sac fly to make it 8-3 Nationals, but Mattheus got Hector Sanchez swinging to end the inning. Mark DeRosa doubled to right off Giants' lefty Javier Lopez to start the Nats' eighth, but he was forced out at third on a weak grounder to the mound by Steve Lombardozzi. Lombo then scored from first when Bryce Harper doubled to left to make it 9-3. Harper's opposite field hit was his second double of the night and 14th of 2012.

• Lightning: Michael Gonzalez recorded the first two out of the Giants' ninth and... Davey Johnson went to the bullpen for right-hander Henry Rodriguez, whose return from the DL was announced just before the start of the game. Ryan Theriot took a 100 mph 2-2 fastball for a called strike three and the Nationals won their 46th game of 2012. 9-3 final. 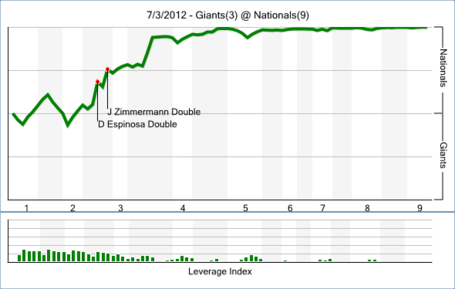