• Strasburg vs Lee: Stephen Strasburg gave up back-to-back one-out singles by Juan Pierre and Chase Utley after striking Jimmy Rollins with a cruel 90 mph 1-2 change that followed a 97 mph 1-1 fastball. Ryan Howard stepped in with two on and one out in the top of the first and shot a 95 mph heater out to second where Steve Lombardozzi made a diving play and toss to Danny Espinosa to start a slick 4-6-3 inning-ending DP that got the Nats' 23-year-old right-hander out of the first after just nine pitches. The Philadelphia Phillies traded two-thirds of their outfield away this afternoon, sending Shane Victorino to LA and trading Hunter Pence to San Francisco. 33-year-old lefty Cliff Lee was still a Phillie after the deadline passed, however, so he made his scheduled start against the Nationals, against whom he was (3-2) with a 2.89 ERA, seven walks (1.69 BB/9) and 38 K's (9.16 K/9) in five starts and 37.1 IP in his career. Lee needed 17 pitches to get through a scoreless first after giving up a leadoff walk in an eight-pitch AB against the scrappy Lombardozzi. 0-0 after one in Washington.

• Frandsen? The Old Giants' Infielder? Yep, That's Him: Carlos Ruiz threw his bat at a 98 mph full-count fastball outside and sent it the other way for a leadoff line drive double to right in the top of the second. A 96 mph fastball upstairs got Laynce Nix to chase strike three up out of the zone for out no.1 of the second and K no.2 of the night for the Nats' starter. A brutal 2-2 curve to John Mayberry got the Phillies' outfielder swinging awkwardly for out no.2 and K 3. Strasburg started 30-year-old former San Francisco Giants' infielder Kevin Frandsen with a 95 mph first-pitch fastball though, and the third baseman hit a two-out, two-run HR to right-center, over the GEICO sign and into the stands. Opposite field blast for Frandsen, who's played just one game this season, returning to the majors this year for the first time since 2010 and hitting his first home run since September 30, 2007. 2-0 Phillies after one and a half.

• Juan Pierre? Still A Phillie: Cliff Lee gave up a two-out double on a first-pitch fastball to Jesus Flores in the Nationals' second, but got a called strike three on Roger Bernadina to end a 15-pitch second at 32 pitches overall. Stephen Strasburg thought he had a called strike three on Juan Pierre. Home plate umpire Tim McLelland disagreed. Pierre got hold of the next pitch, a 97 mph full-count fastball and singled to center with one down in the top of third. Pierre was off quickly, taking second on Strasburg, and he took third too, stealing both bases before scoring on an errant throw to third by Nats' catcher Jesus Flores. Stolen bases 24 and 25 for Pierre. 3-0 Phillies after two and a half.

• Clifton Phifer: Stephen Strasburg took a first-pitch fastball to right for an opposite field single to start the Nationals' third. The pitcher took second on a bloop single to center by Steve Lombardozzi. Cliff Lee carved Bryce Harper up, getting the 19-year-old rookie swinging with a diving 2-2 change for Lee's third K of the night. Danny Espinosa flew to left on a 1-0 change he thought he'd crushed. With two on and two out, Michael Morse singled through short to load the bases for Tyler Moore, but the 25-year-old first baseman, playing in place of the injured Adam LaRoche, grounded out to third to end Lee's third scoreless frame.

• ITPHR For Rollins: John Mayberry doubled off the base of the left field wall with one down in the fourth, arriving at second just a step ahead of a throw in from Michael Morse. One out later the Phillies' outfielder scored from second when Cliff Lee singled to right on a 1-0 fastball from Strasburg. 4-0 Phillies. After Cliff Lee singled in a run, he embarrased the Nats by stealing his second career base off the Nationals while they (with "they" = Strasburg, Flores and Tyler Moore) were sleeping. Jimmy Rollins got hold of a 2-0 fastball in the next at bat and bounced it off the right field wall. Bryce Harper jumped into the fence in front of the home bullpen and fell head over heels after he collided with the wall, rolling over and recovering, but not in time to catch the Philllies' shortstop, who had sped around the bases for a two-out, two-run inside-the-park home run and a 6-0 Phillies' lead. A 17-pitch frame had Strasburg at 65 pitches after four innings pitched in Nats Park.

• Stras Done: Strasburg hit in an 18-pitch fourth by Cliff Lee that had the Phillies' lefty up to 67 pitches after four scoreless, but the Nats' right-hander was done for the night, replaced by Tom Gorzelanny in the top of the fifth.

• After a 10-pitch top of the inning by Gorzelanny, Cliff Lee threw a 12-pitch bottom of the fifth, completing his fifth scoreless frame after just 79 pitches. Gorzelanny gave up a leadoff single by John Mayberry, who lined a first-pitch fastball to center, but seven pitches later the Nats' left-hander reliever was through an eight pitch frame and his second scoreless inning. Cliff Lee needed 12 pitches to retire the Nats in order in the bottom of the sixth, after which he was up to 91 pitches overall in 6.0 scoreless.

• Lee Dominates Thru 7.0: Tom Gorzelanny got Ryan Howard swinging for what should have been out no.3 of a 12-pitch, 1-2-3 seventh, but strike three was a wild pitch that got away from Jesus Flores, allowing the Phillies' first baseman on with two outs. Carlos Ruiz popped out to end a 17-pitch seventh by the Nats' left-handed. Cliff Lee threw a 12-pitch, 1-2-3 bottom of the inning, retiring the tenth straight batter and the 13th of 14 overall. 6-0 Phillies after seven.

• Lightning: Henry Rodriguez gave up a one-out walk to John Mayberry, who went first-to-third on a two-out single to center by Dominic Brown. The Nats' flame-throwing reliever retired Jimmy Rollins two pitches later, however, leaving runners on the corners at the end of a 20-pitch frame. Phillies' lefty Antonio Bastardo continued what Lee started and retiring the 12th-straight batter overall before leaving the game with two down. Kyle Kendrick came on for the Phillies and struck Danny Espinosa out to end the eighth. Still 6-0. Henry Rodriguez put the first two runners on in the ninth before recording an out. Drew Storen took over on the mound, giving up an RBI groundout by Carlos Ruiz that made it 7-0 Philadelphia. Laynce Nix drove in the other runner Rodriguez put on and it was 8-0.

• Michael Schwimer came on to end it, striking Michael Morse out for the first out of the Nats' ninth. Tyler Moore K'd swinging for out no.2. Mark DeRosa K'd looking to end it. Phillies win, 8-0 final. This one was ugly. 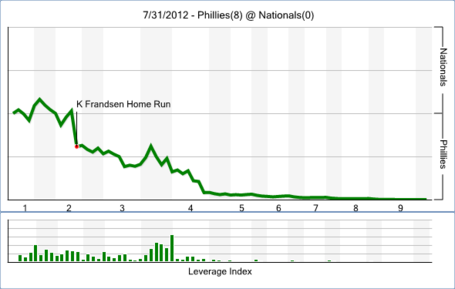