• WOW (Walk-Off-Werth): An extra-inning, walk-off wild pitch ended the Washington Nationals' 4th of July game with the Chicago Cubs last summer. Nats' right fielder Jayson Werth walked to start the bottom of the 10th against reliever Marcos Mateo, took second on a sac bunt by Livan Hernandez, stole third and then scored on a wild pitch by Cubs' closer Carlos Marmol, who'd taken over on the mound for Chicago after Livan's bunt. It was a big moment for the Nationals and their then-relatively-new outfielder. The Nats started their 4th of July game this year at 11:00 am EDT to accommodate holiday traffic in the nation's capital. It was the big bats they're swinging these days, however, rather than a walk-off wild pitch/gift that allowed them to come from behind and take the second-straight game against San Francisco in the matinee in Nationals Park...

• Must. Survive. First: Edwin Jackson started the game, at just after 11:08 am in the nation's capital, with a five-pitch walk to San Francisco Giants' leadoff man Gregor Blanco. After E-Jax missed with two pitches to D.C. native Emmanuel Burriss, Jackson got a visit from Nats' catcher Jhonatan Solano (aka Onion) and got the first out with the next pitch when Burriss flew out to Bryce Harper in right-center. Melky Cabrera battled Jackson in an eight-pitch at bat that ended with a single to right field that sent Blanco around to third, and Mark DeRosa missed the cutoff man on the throw in, allowing Cabrera to take an extra base. Second and third, and a Buster Posey groundout brought the leadoff walk in to make it 1-0 Giants. E-Jax got ahead in the count against the so-called "Kung-Fu Panda", All-Star 3B Pablo Sandoval by throwing two 95 mph four-seamers by the Giants' slugger, but another mid-90's heater in a 1-2 count got crushed as Sandoval sent a two-run blast to right-center and over the edge of the out-of-town scoreboard for his seventh HR and a 3-0 Giants' lead after one.

• STOP HITTING DANNY!!: Giants' lefty Madison Bumgarner hit Danny Espinosa with the fourth pitch of the Nats' first. Espinosa stole second with Bryce Harper up, but San Franciso's 22-year-old starter got Washington's 19-year-old outfielder swinging at a 3-2 slider for the first out of the inning. Ryan Zimmerman lined one off Bumgarner's thigh, but the pitcher recovered to make the play and then popped Michael Morse up to end a 14-pitch inning.

• DESI! No, Desi!: Brandon Crawford doubled with one down and took third on a fly to center, but was eventually stranded as Edwin Jackson completed a scoreless 12-pitch second. Ian Desmond took first on a wild pitch he K'd chasing in the Nats' second, then got picked off by Bumgarner trying to steal a base. The Giants' lefty then completed a quick 12-pitch second to preserve San Francisco's 3-0 lead. Edwin Jackson needed just eight pitches to retire the side in order in the top of the third and he was at 46 pitches overall after three...

• All W/ 2 Outs: Back-to-back groundouts by Jhonatan Solano and Edwin Jackson had Madison Bumgarner through 2.2 hitless before Danny Espinosa singled to center on an 0-1 change. Bryce Harper followed with a single to center on a 1-0 slider in the next AB and there were runners on the corners all of a sudden with two down in the third. Ryan Zimmerman launched a 93 mph 1-0 four-seamer to left for what looked like it was going to be a game-tying home run, but it hit the left field wall, right above Jackie Robinson's retired no.42, for a two-out RBI double. 3-1 Giants after Zim's 15th two-bagger of 2012 and the Nats' third-straight two-out hit. Michael Morse walked to load the bases for Ian Desmond with two down, and Desmond, who entered the AB with a .433/.382/.500 career line with the bases loaded, singled to center to drive in two runs and tie it at 3-3.

• E-Jax: Pablo Sandoval singled to start the fourth, but Edwin Jackson threw a low 2-2 fastball by Brandon Belt and got an inning-ending 4-6-3 off Nate Schierholtz's bat to end an 18-pitch inning at 64 pitches overall. 12 pitches into the bottom of the fourth, E-Jax had a one-run lead when Nats' backstop Jhonatan Solano took a 2-2 slider to right and over the out-of-town scoreboard for an opposite field HR and a 4-3 Nats' lead. Solano's second HR of 2012. Bumgarner got the next two outs to get out of the inning, and was up to 69 pitches overall after four.

• TKCHZ!!: Edwin Jackson threw a 19-pitch, 1-2-3 5th, after which he had set down 10 of 11 batters going back Brandon Crawford's one-out double in the second. Only Pablo Sandoval reached after that, and he was erased on a DP grounder. 83 pitches for E-Jax after five. Bryce Harper started the bottom of the fifth with a line drive single to right on the first pitch from the Giants' Bumgarner. Ryan Zimmerm- THE KIDS CALL HIM ZIM!! THE KIDS CALL HIM ZIM!! Ryan Zimmerman stepped up next and sent a 2-2 slider to right field and over the out-of-town scoreboard for a line drive two-run HR and a 6-3 Nats' lead. Zimmerman's 7th of 2012. And Michael Morse followed that up with another oppo-boppo blast! Morse sent one soaring into the Nats' bullpen in right for a 7-3 Nationals' lead in the nation's capital.

• E-Jax Gets O-vation: Emmanuel Burriss walked to start the sixth, and scored two outs later when Pablo Sandoval doubled off the out-of-town scoreboard in right. 7-4 game (and not a lot of range in right by DeRosa). E-Jax was done, and he got a nice ovation from the D.C. Faithful when he left the mound after 5.2 IP, 5 H, 4 R, 4 ER, 2 BB, 3 K's, 98 P, 62 S, 7/3 GO/FO. Tom Gorzelanny walked the first batter he faced, Brandon Belt, to put two on with two out and Nate Schierholtz at the plate, but Gorzo got a groundout to first and got over to cover for the final out of the Giants' sixth. Jhonatan Solano singled to start the home-half of the frame and chase Madison Bumgarner. The "Onion" then stole second for his first MLB SB. Giants' lefty Jeremy Affeldt walked Adam LaRoche in the next at bat, but got a 5-4-3 DP from Danny Espinosa for outs no.1 and 2 and a groundout to second from Bryce Harper to end the sixth. Still 7-4 Nats.

• Gorzo/Burnett: Tom Gorzelanny needed just seven pitches to retire the Giants in order in the top of the seventh. Giants' reliever George Kontos threw just eight pitches in a 1-2-3 inning of his own. #Nats' lefty Sean Burnett got Emmanuel Burriss to chase a 1-2 slider in the dirt for out no. 1 in the eighth before Melky Cabrera singled on a line drive to right. Buster Posey flew out to right in the next at bat though and Ryan Zimmerman scooped up a swinging bunt by Pablo Sandoval and did his thing with an underhand throw to first to end the Giants' eighth. Roger "The Shark" Bernadina singled and stole second off Giants' right-hander Clay Hensley, who then served up HR no. 4 of the game by the Nationals' batters. This time it was Rick Ankiel who sent a two-run blast out to right and it was 9-4 Nationals in the eighth. A one-out walk to Adam LaRoche ended Hensley's day and a Danny Espinosa single put two on for Bryce Harper. Harper walked too to load the bases for Ryan Zimmerman, who grounded into an inning-ending 4-6-3.

• 1-2-3: Michael Gonzalez popped Brandon Belt up to short to start the ninth. ONE!! Pinch hitter Justin Christian flew out to left where Roger Bernadina made the catch! [CHOMP!] I mean, TWO!! Joaquin Arias singled to right to delay the celebration, but Gonzalez got Angel Pagan to ground into a force at second to end the game. 9-4 final. Nats take the first two with the Giants in Nats Park. 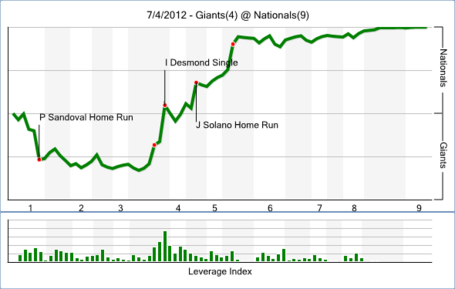