Share All sharing options for: Washington Nationals Rally In Bottom Of The Ninth And Sweep San Francisco Giants 6-5 On Adam LaRoche Walk-Off Groundout.

• Washington, D.C.: No.34 in center, 19-year-old Senators' rookie sensation Bryce Harper, made the catch for the first out of the game tonight in Nationals Park when New York outfielder Justin Christian flew out on a full-count fastball and the ninth pitch he saw from '07 1st Round pick Ross Detwiler in the first at bat of the third game of three for the Giants in Washington, D.C. Detwiler, the 26-year-old, '07 Senators' 1st Round pick, gave up three-straight singles in the next three AB's but struck NY 3B Pablo Sandoval out with a 95 mph 1-2 four-seamer outside for out no.2 and got a force at second on a grounder to short by Angel Pagan for out no.3 to end a 19-pitch opening frame. 27-year-old Giants' right-hander Matt Cain needed just 13 pitches to retire the first three Senators in order in the home-half of the first inning in the nation's capital. No score after one.

Ross Detwiler threw a quick, seven-pitch, 1-2-3 top of the second, retiring the Giants' 7-8-and-9 hitters on order to keep the game scoreless through one and a half in Nats Park. Senators' right fielder Michael Morse went the other way with a fastball from Matt Cain in the bottom of the second, lining a single to right for Washington's first hit off the New York starter. Morse went first-to-third™ on a single to center by Adam LaRoche that Giants' center fielder Angel Pagan bobbled, putting runners on the corners with no outs, but Cain got a 6-4-3 DP on a grounder to short by Ian Desmond, giving up a run when Morse scored from third to give the Senators a 1-0 lead, but getting the first two outs of what ended up being a 12-pitch second...

• 2 Outs = 1 Run: Justin Christian was all over a first-pitch change from Ross Detwiler, lining to left for a leadoff double in the top of the third. A groundout to first by Ryan Theriot moved Christian to third, and the Giants' right fielder scored from there on another groundout by Melky Cabrera, tying the game at 1-1. Detwiler walked Buster Posey on four pitches, putting a runner on for Pablo Sandoval with two down, then gave up back-to-back two-out singles by Sandoval and Angel Pagan and gave up the lead when the two-out walk came around. 2-1 New York after two and a half and Detwiler was up to 49 pitches overall after a 23-pitch inning. Steve Lombardozzi lined to right for a two-out single in the Senators' third, but Bryce Harper flew to left to end a 12-pitch frame by Matt Cain.

• Melkman Delivers: Joaquin Arias K'd swinging at a 1-2 slider for the first out of the fourth and Ross Detwiler's 3rd K in 3.1 IP. The opposing pitcher got a piece of a 92 mph four-seamer, but just fouled it into Jesus Flores' glove. 2 outs, 4 K's. Justin Christian reached first safely with two down on a swinging bunt on which not even Senators' third baseman Ryan Zimmerman could make a play. Zimmerman didn't even try when Ryan Theriot barely connected with a two-strike sinker and did the same. Back-to-back swinging bunts put two on, and then a hard-hit RBI double by third by Melky Cabrera made it a 3-1 Giants' lead. A two-out walk to Buster Posey loaded the base for Pablo Sandoval, but a grounder to third ended the inning. 27-pitch frame by Detwiler, 17 of them after he had two outs. 76 pitches overall after four.

• [Shift. Defeated.]: With the Giants in the dramatic shift, "Graceful, Effortless" Adam LaRoche dropped a bunt down the third base line to put a runner on with two down for All-Star Ian Desmond in the Senators' fourth. Desmond took a hack at a 3-0 fastball, but fouled it off and walked on a 3-1 slider in the dirt. Left Side Danny Espinosa thought a 2-2 fastball was inside, but he was punched out by home plate umpire Gary Darling to end a 22-pitch inning by Matt Cain, who was at 59 pitches overall after four.

• Zim. Can. Pick it: Angel Pagan singled to start the 5th with the Giants' 10th hit. Bryce Harper dove for a line drive to center by Brandon Belt, but couldn't make the catch. 11 hits. Two on with no one out, but Ryan Zimmerman fielded a one-hopper to third by Joaquin Arias, stepped on the bag and threw to second for a rare 5-4 DP and Detwiler got the opposing pitcher swinging for out no.3 and K no. five in 5.0 IP. Matt Cain needed just 12 pitches to retire the Senators in order in the bottom of the inning. Rick Ankiel hit for Detwiler in the 5th, so Det was done after 5.0 IP, 11 H, 3 R, 3 ER, 2 BB, 5 K's, 90 pitches, 58 strikes, 7/1 GO/FO.

• Who is Justin Christian?: Justin Christian (3 for 4) singled off Senators' reliever Craig Stammen and stole second to start the sixth. A sac bunt by Ryan Theriot moved Christian to third and a sac fly by Melky Cabrera made it 4-1 Giants after five and a half. Bryce Harper got an ovation from the crown when he pushed Matt Cain to 10 pitches in the inning-opening at bat in the Nats' sixth, but Harper grounded out to first on the tenth pitch, and the Senators went down in order in an 18-pitch inning by the Giants' right-hander.

• Despinosa!: Pablo Sandoval singled off Stammen to start the seventh with the second straight leadoff hit, then scored from first on an RBI triple to right by Angel Pagan. Pagan's fifth triple and NY's 14th hit tonight made it 5-1 Giants in the seventh. Adam LaRoche flew out to start the home half of the frame, but Ian Desmond got a hold of a first-pitch fastball from Matt Cain and sent an opposite field HR out to right. Desmond's 15th HR of 2012 was followed by Danny Espinosa's seventh as the Senators' second baseman took the Giants' starter deep for the second of two HR's in consecutive AB's. 5-3 game in the nation's capital. A fly ball out by Jesus Flores was hit hard enough that Giants' skipper Bruce Bochy lifted Matt Cain. Jeremy Affeldt took over, but gave up a double to left by Mark DeRosa and a single off his glove by Steve Lombardozzi to put runners on the corners for Bryce Harper. Harper checked his swing on a 2-0 pitch from the Giants' lefty, but it was called swinging strike by third base ump Jerry Meals. Harper took a 2-1 pitch to left that dropped in front of Melky Cabrera and got by the Giants' outfielder for an RBI double. Harper's 15th two-bagger of 2012 made it 5-4 Giants. 2 on, 2 out, but Ryan Zimmerman lined out to center against new reliever Sergio Romo. 5-4 Giants after seven.

• Lightning: Henry Rodriguez struggled a bit with his control, but was throwing serious heat as he completed a 15-pitch frame. Ian Desmond came through with a two-out single to right field off Sergio Romo in the eighth. "Left Side" Danny Espinosa came up with a runner on, but caught a slider on the elbow to put two runners on. Desmond stole third with Jesus Flores up, but the Senators' catcher flew out to end the eighth. Still 5-4 Giants. Tyler Clippard came on in the top of the ninth, struck out two and completed a scoreless 18-pitch, 1-2-3 frame.

• Senators Rally!: New York closer Santiago Casilla came on to pitch the bottom of the ninth. Senators' pinch hitter Tyler Moore took a 1-2 slider to left-center for a leadoff double and then took third on a sac bunt attempt by Steve Lombardozzi that ended up a single when the Giants' pitcher couldn't make the play. Bryce Harper stepped in with the tying run on third and singled to right on a chopper that made it through! Moore scored. 5-5 game. The Giants walked Ryan Zimmerman to load the bases, and got a force at home on a grounder to second by Michael Morse, and they almost turned an inning-ending, game-saving DP on another grounder to second by Adam LaRoche, but the throw to first by Brandon Crawford was low and Brandon Belt couldn't field it! Harper scored from third and the Senators swept the Giants on a walk-off groundout. 6-5 final. 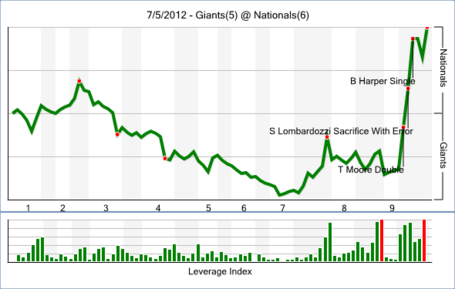 *Or they would be if "clutch" existed.