• '09 1st Rounder vs 2010 1st Rounder: Home plate ump Jim Joyce didn't like a 98 mph 2-2 fastball low and a little too inside in his mind from Washington Nationals' right-hander Stephen Strasburg to Colorado Rockies' left fielder Carlos Gonzalez. The left-handed hitting outfielder fouled off two full-count pitches from the Nats' starter, but K'd chasing a brutal 3-2 change that dove out of the zone away and under his bat to end a 16-pitch top of the first in the nation's capital. 23-year-old, 2010 1st Round pick Drew Pomeranz sawed Ryan Zimmerman off and got a weak pop to first from the Nats' third baseman to end a 13-pitch, 1-2-3 bottom of the inning in which he struck Danny Espinosa out and got a groundout to short from Bryce Harper. 0-0 after one.

• Tyler Colvin pwns Nats: Strasburg threw a 97 mph fastball by Michael Cuddyer for the first out of the second and his second K of the night. Jesus Flores had a hard time with a pop behind the plate from Tyler Colvin on the first pitch in the next AB, and the Nats' backstop was charged with an error when he dropped it, E:2, so of course the Rockies' outfielder came back and crushed an 0-2 heater later in the at bat, sending a towering home run to right and into the second deck above the Nationals' bullpen for a solo blast and a 1-0 lead. Strasburg needed 19 pitches to get through the second, which ended with former Nats' catcher Wil Nieves striking out chasing a wicked 0-2 bender. 3 K's, 32 pitches for Strasburg in 2.0 IP.

• Pomeranz Rolling: After throwing a nine-pitch, 1-2-3 bottom of the second, Rockies' lefty Drew Pomeranz K'd trying to bunt an 0-2 fastball from Strasburg for the first out of the third. Shortstop Jonathan Herrera, who reached safely on a pop to right Michael Morse probably should have caught, took second on a swinging bunt by Dexter Fowler in the next at bat, but was stranded there when Marco Scutaro grounded out to second to end a 17-pitch 3rd by the Nats' right-hander. 49 P in 3.0 IP. Drew Pomeranz shattered another bat for what should have been out no. 2 of the home-half of the frame, but Jesus Flores reached first safely when Tyler Colvin failed to catch a throw from third baseman Jordan Pacheco that pulled the Rockies' first baseman dangerously into the basepath. Danny Espinosa stepped in with the Nats' first runner on, and popped out on the first pitch he saw to end a 12-pitch third by Pomeranz. No hits thru three fo the Nationals. 1-0 Rockies.

• Tyler Colvin Makes The Cubs Regret Things: Carlos Gonzalez appeared to have swung at an 89 mph 2-1 change from Stephen Strasburg, but third base umpire James Hoye didn't think he went, so instead of K no. 6 it was walk no.1 one pitch later when the Nats' right-hander missed with a 3-1 change. CarGo moved into scoring position on a grounder to third Ryan Zimmerman fielded and sidearmed over to LaRoche and the Rockies' outfielder scored when Tyler Colvin took Strasburg deep to right and just over the out-of-town scoreboard for his second home run of the night and his 13th HR of 2012. Colvin's 2 for 2 tonight with 2 HR's. In his last 4 games vs Nats including the series in Coors Field, Colvin's 9 for 15, with a double, triple, three home runs and nine 9 RBI's. 3-0 Rockies after Strasburg's through a 21-pitch frame. Drew Pomeranz gave up his first hit in the fourth on a "single" popped to short center by Bryce Harper that neither shortstop Jonathan Herrera or Dexter Fowler managed to catch, but the Rockies' lefty retired the next three batters in order in a quick 13-pitch inning and he was through 4.0 scoreless.

• DP's Keep It Close: Strasburg needed 19 pitches to get through the fifth, giving up leadoff and one-out singles but getting a 6-4-3 DP off Rockies' second baseman Marco Scutaro's bat to keep it close after four and a half. Drew Pomeranz issued his first walk in 5.0 IP, but completed his fifth scoreless on 61 pitches after a 14-pitch bottom of the inning. Still 3-0 Rockies. Carlos Gonzalez went the other way with a 2-1 fastball for a leadoff single in the sixth and the Rockies' sixth hit off of Strasburg. A brutal 0-2 curve got Michael Cuddyer swinging for out no.1 and K no.6. Tyler Colvin (3 for 3) and Jordan Pacheco singled in succession with one out to load the bases in the Rockies' sixth, pushing Strasburg up to 103 pitches on the night, but four pitches to former Nats' catcher Wil Nieves later, Strasburg was out of the inning when he got a double play grounder to third and a 5-2-3 DP to end the Rockies' half of sixth.

• 75 To 107: Bryce Harper walked with one down, taking the second free pass of the night from the Rockies' Drew Pomeranz. Ryan Zimmerman just missed on a 93 mph 0-1 fastball, sending out no. 2 of the sixth out to Carlos Gonzalez in left and Michael Morse flew to right for out no.3 as Pomeranz completed a 14-pitch 6th at 75 pitches overall. Strasburg was done after six with Tom Gorzelanny coming on in the top of the seventh...

... Gorzelanny retired the first two batters he faced, sprinting to first in time to field a swinging bunt and tag Jonathan Herrera on the Rockies' runner's way to first and getting the opposing pitcher looking for out no.2, but Gorzelanny gave up a two-out home run to right by Dexter Fowler that soared over the out-of-town scoreboard and gave Colorado a 4-0 lead. Fowler's 11th HR of 2012. Drew Pomeranz got Adam LaRoche looking for his sixth K of the night, and the Rockies' lefty was done after 6.1 IP, 1 H, 2 BB, 6 K's, 81 P, 53 S. Rockies' right-hander Matt Belisle took over in the seventh and retired the next two batters to preserve the 4-0 lead through seven innings.

• Free Run: Carlos Gonzalez doubled to center over Bryce Harper's head for his second hit of the night in the top of the eighth. Ryan Mattheus took over for Gorzelanny and let CarGo steal third as he stood staring toward home. A sac fly to right from Michael Cuddyer brought CarGo in and made it 5-0 Rockies. Tyler Colvin just missed hitting his third home run of the night, flying out to right for out no. 2 of an inning that ended with Chris Nelson flying to right. 5-0 Rockies after seven and a half. Steve Lombardozzi singled with one down in the eighth, collecting the Nats' first hit since Bryce Harper led off the fourth with a single. Belisle got Danny Espinosa swinging for out no.2, after which lefty Rex Brothers took over on the mound. Harper lined to center on a 97 mph 2-1 fastball, but Dexter Fowler tracked it down and made the catch end the eighth.

• TKCHZ!!: Henry "Lightning" Rodriguez needed 14 pitches to retire the Rockies in order in the top of the ninth. Rex Brothers came back out and gave up a leadoff home run by Ryan Zimmerma--- THE KIDS CALL HIM ZIM!! THE KIDS CALL HIM ZIM!! The Nats' third baseman sends his eight home run out to left-center and into the Red Porch seats to get the Nationals on the board. 5-1 in the Nats' ninth. Michael Morse took a 99 mph four-seamer from Brothers to right for a double that bounced off the United Airlines ad and Adam LaRoche followed with a line drive single to chase the Rockies' reliever in favor of Colorado closer Rafael Betancourt. LaRoche stole second without a throw on the first pitch from Betancourt. Ian Desmond fouled off a few 0-2 pitches before he K'd swinging for out no.1. Roger Bernadina lined to left, but right at left fielder Carlos Gonzalez for out no.2 and Jesus Flores popped out to short to end game one of three for the Rockies in D.C. 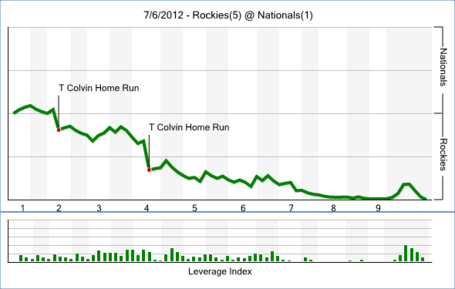