• All-Star NatGio: Gio Gonzalez couldn't get Rockies' outfielder Dexter Fowler to chase an 0-2 curve in the dirt after the Nationals' starter had painted the corner with a fastball outside and dropped an 0-1 bender in for a called strike to get ahead in the count. The Nats' lefty's 1-2 pitch was a 93 mph fastball upstairs that the hot-hitting visiting center fielder lined to left for a leadoff single in the second game of three for Colorado in Washington, D.C. Fowler, who was 2 for 4 with a home run last night, was running when Marco Scutaro grounded out to third in the next at bat, so he avoided getting forced out at second, but was stranded there two outs later when Gio Gonzalez got Carlos Gonzalez to chase another 1-2 curve in the dirt, and got Michael Cuddyer to ground out to end a 19-pitch top of the first in Nationals Park.

Bryce Harper K'd looking at a full-count curve from Jeff Francis that was called strike three for the second out of the Nationals' opening frame while the 19-year-old outfielder was already on his way to first thinking he had walked. Home plate ump Mike DiMuro disagreed. Ryan Zimmerman, who entered today's game with 9 hits in 18 career AB's against the Rockies' left-handed starter, took a two-out walk to bring Michael Morse to plate, but the Nats' 30-year-old outfielder grounded out to end the inning...0-0 after one.

• Walk > Another Colvin HR: Tyler Colvin walked on four pitches in his first at bat against Gio Gonzalez after homering twice off Stephen Strasburg in the series opener last night. Michael Morse tried to pick Colvin off first on a line drive out to right in the next at bat, but the throw to Adam LaRoche was weak and arrived late. Gio Gonzalez got Rockies' catcher Wilin Rosario looking with a cartoon curve on a 2-2 pitch that was called strike three for out no.2 and Adam LaRoche dove to rob Colorado shortstop Jonathan Herrera of a potential extra base hit on a sharp grounder to first that the Nats' first baseman gracefully and effortlessly handled. 0-0 after one and a half. LaRoche let Ian Desmond see eight pitches as Desi waited on deck and watched the first baseman K to start the Nats' second. Desmond then stepped in and connected with an 0-1 sinker that he sent out to right, over the out-of-town scoreboard and out for a solo HR and a 1-0 Nats' lead. Desmond's 16th HR of 2012.

• Morse = All Power, No Arm: Marco Scutaro walked in a seven-pitch at bat with two down and pushed Gio Gonzalez to 52 pitches overall in the third, but the Nats' lefty got a called strike three with a 2-2 bender to Carlos Gonzalez and ended the top of the third with his third K in 3.0 scoreless. Still 1-0 Nats. 13-pitches from Jeff Francis and three quick outs later, Gonzalez was back on the mound in the top of the fourth with 57 pitches overall to start the frame. Michael Cuddyer doubled on a dribbler that just got under Ryan Zimmerman's glove on a backhand attempt by the Nats' third baseman. Tyler Colvin's groundout to first moved Cuddyer to third and he scored to tie it on an RBI fly to right by Jordan Pacheco. Michael Morse loaded up and threw home on the fly ball, but the throw bounced and came in up the third base line a bit so a swiping attempt at a tag by Jesus Flores missed the sliding runner. 1-1 game. A 12-pitch inning had Gonzalez at 69 pitches overall after 4.0 IP.

• Trading GiDPs: Ryan Zimmerman couldn't get a hard-hit one-hopper by Marco Scutaro at second, but Michael Morse snuck one by Rockies' shortstop Jonathan Herrera for a one-out single and the Nationals' second hit of the game off Jeff Francis in 3.1 IP. Adam LaRoche followed the Morse single with a grounder to second, however, and the Rockies' lefty got out of the Nationals' fourth with the help of a 4-6-3 DP. Gio Gonzalez gave up a two-out double by Dexter Fowler in the top of the fifth, but a fly to right from Marco Scutaro ended an 18-pitch fifth with a Rockie stranded at second. Ian Desmond and Tyler Moore hit back-to-back singles to start the Nationals' fifth against Francis, but the Colorado left-hander got a 6-4-3 DP from Jesus Flores and a swinging K from the opposing pitcher to end an 11-pitch inning at 68 pitches overall.

• E's = Runs: By the time Gio Gonzalez completed a 15-pitch 6th, allowing a one-out walk but nothing else, the Nationals' All-Star lefty was up to 102 pitches overall in 6.0 IP over which he allowed one run on three hits with three walks and six K's. Still 1-1 after five and a half. Danny Espinosa doubled off the out-of-town scoreboard on an 86 mph 2-2 fastball from Francis in the bottom of the sixth, then took third when Bryce Harper hit a bloop single to short left. Right-hander Josh Roenicke took over for Francis with Ryan Zimmerman up, and the Nats' third baseman got all of a 95 mph 1-2 heater from the Rockies' reliever, sending a screaming line drive back up the middle for an RBI single and 2-1 Nationals' lead.

With Bryce Harper on third and Michael Morse up in the next AB, a pitch in the dirt had Zimmerman breaking from first. Colorado catcher Wilin Rosario blocked it and threw to second, but the throw was off the mark and sailed into center allowing Harper to score from third to make it 3-1 Nats. Adam LaRoche walked with one down, but was forced out at second on a grounder by Ian Desmond. With Desmond on first, and Zimmerman on third, a pick attempt by Roenicke got by Cuddyer at first and allowed the third run of the inning to come in. 4-1 Nats after six. Ugly inning by the Rockies.

• To The Pen: Nats' right-hander Ryan Mattheus struck out the side on 15 pitches in the top of the seventh. In the bottom of the frame, Jesus Flores and Steve Lombardozzi reached safely on back-to-back errors by the Rockies infield. Left-hander Matt Reynolds, who replaced Josh Roenicke after the first E on Flores' grounder to third, struck Danny Espinosa out and got a DP grounder from Bryce Harper to end the Nationals' half of the inning. Dexter Fowler singled off Nats' lefty Sean Burnett for his third hit of the game, but was force out at second for the first out of a 15-pitch inning by the Nationals' reliever. Still 4-1 Nats in the eighth.

• Clipp'd: Rockies' reliever Adam Ottavino struck out the side in the bottom of the eighth. Tyler Clippard came out for the ninth looking for his fourteenth straight save. The right-handed reliever got a fly ball to Harper in center from Tyler Colvin for out no.1. Pinch hitter Eric Young dropped a one-out bloop single into center and Wilin Rosario followed with a single through short to bring the tying run up in the form of Jason Giambi. Giambi battled for six pitches, but took a 94 mph 2-2 fastball outside for a called strike. Chris Nelson came up with two down but took a 2-2 fastball outside for a called strike and out no.3 of win no. 49 of 2012. 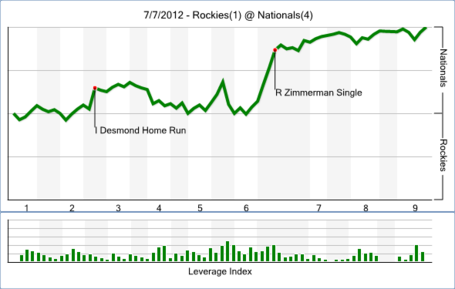