• Phil-E: Washington Nationals' right-hander Edwin Jackson recorded the first two outs of the night on three pitches, then issued a five-pitch, two-out walk to the Phillies' Chase Utley before getting Philadelphia's cleanup hitter Ryan Howard swinging with a vicious 2-2 slider that ended a 14-pitch top of the first. Nationals' right fielder Bryce Harper singled to center with one down in the bottom of the inning, and Chad Tracy took a one-out walk in front of Michael Morse, who bounced a one-hopper off Philly third baseman Kevin Frandsen's chest for a base-loading infield hit. Ruled E:5, actually. Phillies' starter Vance Worley gave up an RBI line drive to center by Adam LaRoche that made it 1-0 Washington early. Bases still loaded. Chase Utley misplayed a potential double play grounder off Danny Espinosa's bat and the Phillies settled for the out at second, but a run scored. 2-0 Nats, but the Phillies' right-hander recovered to retire Roger Bernadina and bring an 18-pitch opening frame to an end.

• Bo Waves Him Around: Chad Tracy, starting at third and batting third in place of the injured Ryan Zimmerman (back), made a diving stop and a strong throw to first on a hot-shot to third off Phillies' infielder Kevin Frandsen's bat. Tracy's Zim impersonation ended a 14-pitch second by Edwin Jackson, who was through two scoreless with a 2-0 lead. Jackson beat out an infield single with one down in the second, hustling to first in time to beat a throw from deep in the hole at short by Jimmy Rollins. One-out later, the pitcher broke from second and tried to score (with the encouragement of third base coach Bo Porter) on an opposite field single by Bryce Harper (2 for 2) only to get thrown out at home by Domonic Brown on a play at the plate that wasn't even close. 2-0 Nationals after two.

• Graceful, Effortless 3-6-4: Phillies' catcher Eric Kratz singled to start the third, but Vance Worley bunted one too hard toward first in the next at bat and a charging Adam LaRoche fielded it and made the throw to second to start a 3-6-4 double play for the first two outs of the inning. Jimmy Rollins, who just missed hitting the first pitch of the game out, got hold 3-1 slider from E-Jax in his second AB and sent a towering blast to right field and into the second deck above the Nats' bullpen. 2-1 Nationals after Rollins' 11th HR of 2012. Nate Schierholtz and Chase Utley hit back-to-back two-out singles in the next two at bats and brought Ryan Howard up with runners on the corners, but the Phillies' slugger K'd swinging again (2-2 heater this time) to end the top of the third after 23-pitches from Edwin Jackson.

• IDWHPTIHP: Chad Tracy lined a 2-0 fastball to right for a leadoff single in the Nationals' third, but three outs later he was stranded as Michael Morse, Adam LaRoche and Danny Espinosa went down in order in a 15-pitch inning that had Vance Worley up to 47 pitches overall after three. John Mayberry reached safely on a throwing error by Danny Espinosa when the Nats' shortstop made an ill-advised throw after fielding a ball that bounced off Edwin Jackson's glove and over to the left side of the infield. Adam LaRoche scooped up a grounder to first by Domonic Brown that moved Mayberry up to third, but the Phillies' outfielder was too far down the third base line on a Kevin Frandsen grounder to third that Chad Tracy fielded before throwing to Jesus Flores and on to Espinosa for a 5-2-6 putout in the rundown. E-Jax walked Eric Kratz to get to Vance Worley, and struck the opposing pitcher out to end the Phillies' fourth. Vance Worley needed just nine pitches to retire the Nats in order in the bottom of the inning.

• J-ROLL!!!!: Jimmy Rollins (1 for 2, HR) took a 92 mph 1-0 fastball from E-Jax to right and just over the giant curly-W on the outfield wall for home runs in consecutive at bats by the Phillies' shortstop. (2 for 2, 2 HR's, BB). Former Giants' outfielder Nate Schierholtz hit the second-straight home run off Jackson on the very next pitch to turn a 2-1 Nats' lead into a 3-2 deficit. Chase Utley hit the 10th pitch of the inning to left for an opposite field double and the third hit in a row to start the fifth. Ryan Howard took the third walk of the night from E-Jax in the next at bat, but Jackson got John Mayberry swinging for out no.1 and K no. 5, got a force at second on a groundout to Lombardozzi by Domonic Brown and another force on a grounder to short by Frandsen to end a 29-pitch inning.

• Worley pwns Nats: Vance Worley set Steve Lombardozzi, Bryce Harper and Chad Tracy down in order in bottom of the fifth, retiring the seventh, eighth and ninth-straight Nats' batters after Tracy's leadoff single in the bottom of the third. Edwin Jackson retired the first two batters in the sixth before issuing a two-out walk to Jimmy Rollins. Michael Gonzalez replaced E-Jax with Nate Schierholtz up and struck the outfielder out to end the Phillies' sixth. Michael Morse ripped a single to left to start the Nationals' half of the inning, but Adam LaRoche rolled one out to second to start a quick 4-6-3 DP. Danny Espinosa took a two-out HBP on the backside, but Roger Bernadina flew to right to end the sixth. Still 3-2 Phillies.

• Fireworks: Michael Gonzalez came back out for the seventh, retiring the Phillies in order in a 15-pitch frame. Worley started the seventh at 79 pitches, then retired the Nationals in order on seven pitches. 14 of 16 set down with Michael Morse's single in the sixth the only hit after Chad Tracy led off the third with a single and Danny Espinosa the only other Nats' player to reach base on the HBP. 86 pitches overall in 7.0 IP by Worley. Ryan Mattheus took over on the mound for Washington in the top of the eighth and retired the Phillies in order on 14 pitches.

• PHZ: Antonio Bastardo popped Bryce Harper up on a pitch the 19-year-old Nats' outfielder thought he should've crushed. A sliding catch on the pop by Nate Schierholtz robbed Harper of a bloop hit. New Phillies' right-hander Josh Linblom, who was acquired by Philadelphia in the deal that sent Shane Victorino to LA, came on and gave up a one-out single by Ryan Zimmerman. Michael Morse K'd swinging at a 94 mph FB for out no. 2. Left-hander Jeremy Horst took over with Adam LaRoche due up, but Ryan Zimmerman was thrown out trying to steal second. 3-2 Phillies after eight.

• Is It Comeback Time Yet?: Ty Wiggington singled to start the ninth and was replaced on the basepaths by Juan Pierre, who promptly stole second and third as Jimmy Rollins struck out. SB's no. 26 and 27 for Pierre. Burnett popped Nate Schierholtz up to short left, not nearly deep enough for Pierre to tag up. Two down, and Burnett covered on a grounder to first by Utley that ended the top of the frame. Jonathan Papelbon popped Adam LaRoche up for out no.1. Danny Espinosa flew out to the track in left where Domonic Brown made the catch with his back to the wall. Roger Bernadina K'd swinging to end it. 3-2 Phillies. Two straight losses for the Nats. 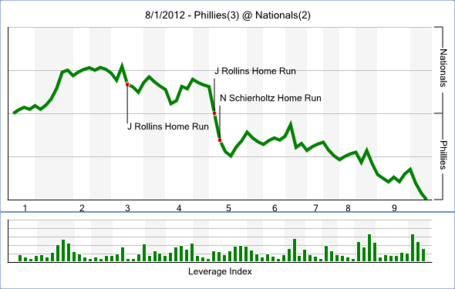