• #LomboLobby Rejoice: Steve Lombardozzi connected with an 0-1 fastball and lined to center for a two-out single in the Nationals' second, collecting a hit in his fifth-straight at bat, but Edwin Jackson K'd swinging to end a 13-pitch inning by the D-Backs' Miley. Justin Upton misplayed a Zimmerman hit in the top of the first, but Upton got a measure of revenge when he doubled past the Nats' third baseman on a one-hopper Zimmerman tried to time but missed. Tough play, so no error, but a runner on second to lead off the inning and Upton scored when Miguel Montero tripled past a diving Jayson Werth in left-center for a three-base RBI line drive hit. 2-1 Arizona on Montero's second triple of 2012. E-Jax pitched around Gerardo Parra and walked him to get to Miley, who K'd trying to bunt, but Stephen Drew came through with a two-out single to bring Montero around and make it 3-1 Diamondbacks after two. A 28-pitch inning had E-Jax at 46 pitches overall.

• CS!!!!: Jayson Werth singled to start the third, but Danny Espinosa K'd swinging and Ryan Zimmerman grounded into an inning-ending 4-6-3. Seven-pitch inning for Miley. Jason Kubel singled on a 1-1 four-seamer from E-Jax then took third on a Justin Upton double to center that soared over Jayson Werth's head and off the wall. A base-loading walk to Miguel Montero brought Chris Johnson up and a sac fly to right made it a three-run game, 4-1 D-Backs. Tyler Moore singled with two down in the Nationals' fourth, but Jesus Flores flew out to right to end a nine-pitch inning by Arizona's rookie lefty. Jesus Flores had thrown out just 5 of 50 would-be base-stealers before tonight's game when Stephen Drew, who walked with one down in the D-Backs' fourth, tried to take another base. Flores gunned him down for the second out of the inning, however, 6 of 51, helping Edwin Jackson get through an 18-pitch frame. 4-1 Arizona after four.

• ROY: Steve Lombardozzi singled to go 2 for 2 tonight with hits in six-straight at bats vs the D-Backs. Edwin Jackson bunted Lombardozzi over in front of Jayson Werth and the Nats' outfielder's ninth double of the year was lined to right on a 1-0 fastball from Miley. 4-2 game on Werth's RBI double. Danny Espinosa reached safely on an error by Arizona third baseman Chris Johnson and both he and Werth scored when Ryan Zimmerman lined an 0-2 fastball to left for a two-run single. 4-4 game and then 5-4 after Michael Morse drove Zimmerman in with his 13th double of 2012. Smoked line drive to center on a 1-1 two-seamer. A one-out walk to Adam LaRoche ended Miley's night after just 4.1 IP, 9 H, 5 R, 4 ER, 1 BB, 2 K's, 68 P, 46 S, 5/5 GO/FO. 5-4 Nationals in the top of the 5th. Brad Bergesen retired the first batter he faced, but gave up a two-out RBI single to center by Jesus Flores that made it 6-4 Nats. 10 batters step in, 5 runs score. 6-4. Given a lead to work with, Edwin Jackson took the mound and threw a 14-pitch, 1-2-3 bottom of the fifth.

• Gorzo K's Drew: Jayson Werth walked with one down, but Paul Goldschmidt and Stephen Drew made nice plays at first and short, respectively, to retire Danny Espinosa and Ryan Zimmmerman in the next two at bats. 15-pitch sixth for the D-Backs' right-hander Brad Bergesen. Edwin Jackson gave up a two-out single by Gerardo Parra and a pinch hit RBI double by pinch hitter Ryan Wheeler, whose second double of 2012 got Arizona within one at 6-5. Tom Gorzelanny took over with Stephen Drew up and the tying run at second and got a generous call on a low full-count fastball to the D-Backs' shortstop. 6-5 Nationals. E-Jax's line: 5.2 IP, 8 H, 5 R, 5 ER, 3 BB, 6 Ks, 1 HR, 111 P, 66 S, 6/1 GO/FO. 6-5 Nats after six.

• FIREWORKS And Underhand Throws: D-Backs' right-hander Bryan Shaw retired the Nationals in order in the seventh, striking out the side on 16 pitches to keep it close. 6-5 Nationals. Jayson Werth managed to cut a hard-hit liner to center off, holding Aaron Hill to a leadoff double off Tom Gorzelanny in Arizona's seventh. Double no. 27 of the year for Hill, who homered off E-Jax earlier in the game. A slider up high from Gorzelanny got Jason Kubel swinging for out no.1. Gorzelanny was done. Ryan Mattheus got a weak grounder to third from Paul Goldschmidt, allowing Zimmerman to do his thing. Two down. And a groundout to short by Justin Upton ended the seventh. Still 6-5 Nats.

• 2 BB, 1 Important K: D-Backs' right-hander David Hernandez retired the first two batters in the Nationals' eighth and got Bryce Harper looking to retire the eighth-straight Nationals' batter and ninth of the last ten. Nats' lefty Michael Gonzalez walked Miguel Montero in a six-pitch at bat to start the D-Backs' eighth. Chris Johnson flew out to right for out no.1. Pinch hitter Chris Young walked with one down. Debuting 25-year-old IF/OF Jacob Elmore, in his first MLB AB, flew out to right for out no.2 and it was up to Stephen Drew, who K'd swinging at a 2-2 slider in the dirt. Two runners stranded. 6-5 Nats after eighth. 22 pitches, 7 strikes by Michael Gonzalez.

• Ready or Not: Brad Ziegler took over for Arizona in the top of the ninth. Jayson Werth went down quickly. Nine Nats in a row. Danny Espinosa battled for eight pitches before grounding out and Ryan Zimmerman did the same. 11 Nats in a row. 6-5 after eight and a half. Tyler Clippard took over in the ninth, looking for save no. 24 of 2012. Aaron Hill popped the first pitch he saw up. ONE!! Jason Kubel flew to center. TWO!!! Paul Goldschidt? One pitch, one out. Ballgame. Nationals win their eighth straight. 6-5 final.

• Miss the Game? The D.C. Faithful Were Watching... 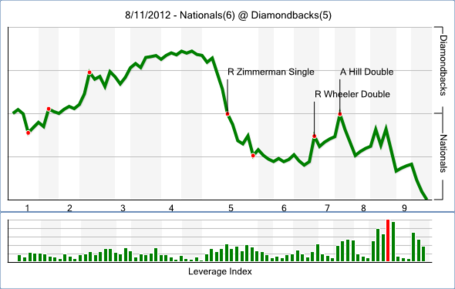