• Harper, Harper, Harper: 23-year-old D-Backs' lefty Patrick Corbin was one of three players that Arizona acquired in the July 2010 deal with Los Angeles that sent Dan Haren and left-handed prospect Tyler Skaggs to the Angels. Corbin, an '09 2nd Round pick out of Chipola College in Marianna, Florida, was making his eighth start of the year this afternoon in Chase Field, and had the first runner of the game reach with one down in the first inning after a throwing error on a weak grounder up the middle by Bryce Harper. The Nats' 19-year-old outfielder reached safely when Diamondbacks' shortstop John McDonald rushed the play and bounced a throw by Paul Goldschmidt at first. Harper rounded the base while looking back to see where the ball went, however, and collided with umpire Mike Muchlinski, falling to the infield dirt and then retreating to the first base bag... where he was picked off, fell down and tagged out in the next at bat. Not a good start for Harper... balance-wise. Ryan Zimmerman grounded out to end an eight-pitch opening inning by Corbin.

Unfazed by the events in the top of the frame, Bryce Harper went out to center field and made a diving catch on a fly to right-center to rob Chris Young of extra bases for the first out of what ended up being a 16-pitch first by Nationals' '07 2nd Rounder Ross Detwiler.

• Gollllllllldschmidt!!!: Patrick Corbin threw 13 pitches in the second, striking out Michael Morse (swinging) and Adam LaRoche (looking) before popping up Tyler Moore to end another scoreless frame in Chase Field. 21 pitches through two for Corbin. Ross Detwiler got a grounder to third from Paul Goldschmidt for what looked like the first out of the D-Backs' second, but Ryan Zimmerman snatched the grounder up, spun around and bounced an overhand throw to first that Adam LaRoche couldn't field. Goldschmidt took second on the error, then stole his 11th base of the year, taking third fairly easily and scoring when Nats' catcher Kurt Suzuki threw the ball by Zimmerman into left. E:5 + SB + E:2 = 1-0 Arizona. 24 pitches, two errors, one unearned run vs Detwiler in the bottom of the inning. 40 pitches total for the Nats' left-handed starter after two.

• Nats Trail: Patrick Corbin needed just eight pitches to set the Nats down in order in the third. 28 pitches total through three scoreless for the D-Backs' lefty. Seven Nationals in a row set down. Chris Young was robbed of an extra base hit by Bryce Harper in the Arizona outfielder's first at bat of the game, but he doubled the second time up, sending a sharp grounder by Ryan Zimmerman at third into left for a one-out, two-base hit, his 17th of 2012. Detwiler retired Aaron Hill, but hit Jason Kubel to put two on with two out for Paul Goldschmidt, whose two-run double to left field made it 3-0 D-Backs. Double no. 27 of 2012 for Goldschmidt. A 26-pitch 3rd had Detwiler at 66 pitches after 3.0 IP.

• 13-Straight: Danny Espinosa, Bryce Harper and Ryan Zimmerman were the eighth, ninth and tenth-straight Nationals retired by DBacks' lefty Patrick Corbin, whose 15-pitch fourth had him at 43 pitches overall. Ross Detwiler's 12-pitch, 1-2-3 inning in the bottom of the frame had the Nats' left-hander at 78 pitches, down 3-0 to Arizona. After a 12-pitch, 1-2-3 5th by Corbin, the left-hander had set down thirteen-straight Nationals. 5.0 scoreless on 55 pitches in the finale of the three-game series. Ross Detwiler issued his first walk of the game in a four-pitch, one-out at bat with the D-Backs' Chris Young, then gave up double no. 27 of 2012 by Aaron Hill, who drove Young in with a two-base hit to left-center. 4-0 Arizona. Detwiler made a face-saving catch on a line drive back to the mound off Jason Kubel's bat, but that was it for the Nats' 26-year-old starter in his 18th start of 2012. Craig Stammen took over and gave up an RBI single by Paul Goldschmidt that drove Detwiler's last runner in. 5-0. Justin Upton's 18th double brought Goldschmidt in and Miguel Montero's 16th scored Upton to make it 7-0 Arizona before Stammen escaped the bottom of the fifth.

• 16? Seriously?: Nats' catcher Kurt Suzuki was the 14th batter in a row set down by D-Backs' lefty Patrick Corbin going back to Bryce Harper's infield single in the first, which was Washington's only hit hrough 5.1 IP. Steve Lombardozzi and Craig Stammen were no.'s 15 and 16 in-a-row set down as Corbin completed his sixth scoreless frame in Chase Field. The 13-pitch inning had him at 68 pitches overall. Craig Stammen gave up a two-out walk to Chris Young in the D-Backs' sixth, but stranded the runner when he completed a scoreless 17-pitch frame.

• NATS SCORE!!!: Danny Espinosa connected for the Nationals' second hit of the game when he doubled to center field to lead off the Nationals' seventh. Double no. 28 of 2012 for the Nats' second baseman. Ryan Zimmerman singled in the next at bat to bring Espinosa around and get the Nats on the board, 7-1. Michael Morse collected the Nationals' third-straight hit on a single to center in the next at bat that sent Zimmerman's pinch runner Cesar Izturis around to third. After going first-to-third™ on Morse's hit, Izturis tagged and scored on a sac fly to left by Adam LaRoche, just beating out a throw home by D-Backs' outfielder Jason Kubel. 7-2 Arizona after six and a half. Craig Stammen retired the side in order on eight pitches in the bottom of the seventh.

• Patrick Corbin's Line: 7.0 IP, 4 H, 2 R, 2 ER, 7 K's, 6/3 GO/FO. Matt Albers took over in the top of the eighth, had a runner reach on an error and issued a two-out walk, but completed a scoreless frame to keep the Diamondbacks' five-run lead in tact. Drew Storen pitches the bottom of the eighth for the Nationals, retiring the D-Backs in order in a nine-pitch frame. 7-2 Arizona after eight. D-Backs' right-hander Takashi Saito gave up a leadoff double by Cesar Izturis in the top of the ninth. 7th double of year by the Nats' new infielder. Double no.14 of 2012 for Michael Morse in the next at bat bounced off the right field wall, just out of the reach of Justin Upton. Second and third for Jayson Werth, whose groundout to third made it a four-run game. 7-3 D-Backs. Tyler Moore singled off the left field wall to bring Michael Morse in and make it a three-run game, 7-4. New pitcher. J.J. Putz popped Kurt Suzuki up for out no.2 of the ninth. Steve Lombardozzi worked the count full and walked to bring the tying run to the plate. Roger Bernadinda stepped in with two on and K'd swinging to end it. Ballgame. Win streak ends at eight. On to San Francisco... 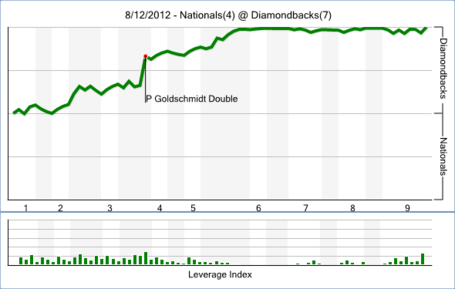 (H/t to cat daddy3000 in the game thread for the title. He did hero's work with the pbp today for all of us in too much pain at the awfulness to listen or watch. His effort embiggens us all.)