• "It is Happening Again." - Twin Peaks Giant: Tonight's game started with a Washington Nationals' batter reaching on an infield single. That's an outcome that likely did little to inspire confidence in a San Francisco Giants team that saw grounder after grounder turn into hit after hit last night with the Nats collecting 21 hits total in a 14-2 win. Nats' shortstop Danny Espinosa reached safely on a line drive to second that Marco Scutaro could only knock down, but Giants' lefty Madison Bumgarner popped Bryce Harper up in foul territory off third and got Ryan Zimmerman to ground into a 6-4-3 DP that ended a scoreless opening frame. 10-pitch first for the 23-year-old Giants' starter in AT&T Park.

With one down in the bottom of the inning, Marco Scutaro doubled to the right-center gap for his 21st two-base hit of 2012, taking a 94 mph 1-0 fastball from Jordan Zimmermann to the gap and hustling to beat Bryce Harper's throw in. Harper was waiting in the gap, however, when Melky Cabrera lined their too for out no.2 of the Giants' first. The Nationals' 26-year-old right-handed starter issued a two-out walk to Buster Posey in front of Pablo Sandoval, but got a sharp groundout to first from the Giants' third baseman and help from Adam LaRoche, who made a diving play and toss to the covering pitcher. 17-pitch first, no score after one...

• Belts One: An 11-pitch, 1-2-3 second for the Giants' Bumgarner ended with Tyler Moore swinging through a 92 mph 0-2 four-seamer. A 94 mph first-pitch fastball from Jordan Zimmermann to Hunter Pence ended up bouncing off the brick wall in right field, but right to Jayson Werth, who held the Giants' outfielder to a single. The second pitch of the inning was lined off the left field wall by Giants' first baseman Brandon Belt, who got thrown out on an 8-2-5 putout when Bryce Harper threw home to Jesus Flores, who threw to third. 1-0 Giants when Pence scored though, and a 13-pitch second by Zimmermann. An 11-pitch, 1-2-3 third had Bumgarner at 32 pitches after 3.0 scoreless. Jordan Zimmermann missed outside with a 2-2 slider outside to Buster Posey, but popped the catcher up with the same pitch to end a 21-pitch third by the Nationals' right-hander. Still 1-0 San Francisco.

• "Right Side": Danny Espinosa was 2 for 2 after taking an 0-2 fastball from Bumgarner back up the middle for a leadoff single in the Nationals' fourth. The Giants' lefty rushed and misplayed a bunt by Bryce Harper putting two runners on with no one out before retiring the next three batters, Ryan Zimmerman on an unproductive fly to right; Jayson Werth on a pop to left on a 3-1 pitch after he'd fouled off a 3-1 pitch and Adam LaRoche on a groundout back to the mound that ended a 17-pitch top of the fourth. Jordan Zimmermann needed 13 pitches to retire the Giants in order in the bottom of the inning in AT&T.

• DIY, Zim...: An eight-pitch, 1-2-3 5th had Madison Bumgarner at 57 pitches overall. Jordan Zimmermann started the bottom of the frame at 64 pitches. Angel Pagan and Marco Scutaro hit back-to-back, two-out singles off the Nats' right-hander to put runners on the corners with two down, but Zimmermann got Melky Cabrera to chase a filthy 1-2 curve for a swinging strike three to end a 19-pitch inning at 83 pitches overall. The Nats' starter singled to right over a leaping Marco Scutaro in the top of the sixth, but he was forced out at second, (after a Danny Espinosa lineout), on a grounder to the mound off Bryce Harper's bat. Ryan Zimmerman stepped in with Harper at first, and flew out to the track in right to end Bumgarner's sixth scoreless. Zimmerman thought it was gone. A 12-pitch inning had Bumgarner at 69.

• Zimmermann's Done: A one-out walk to Pablo Sandoval and a single by Hunter Pence had the Nationals' bullpen active with Jordan Zimmermann up to 93 pitches in the bottom of the sixth. A visit from Nats' pitching coach Steve McCatty was followed by a predictable fastball to Brandon Belt that bounced off the top of the right field wall for an RBI hit. 2-0 Giants, but Belt got thrown out again when Werth plays the bounce and nailed him at second. Two outs. Zimmermann's done. Michael Gonzalez gave up another hard-hit fly to right that Jayson Werth tracked down and it was 2-0 Giants after six in San Francisco.

• What Ankle Problem?: Jayson Werth flew to right-center. Hunter Pence tracked it down, but couldn't make the catch. Leadoff triple. An infield single by Adam LaRoche followed in the neext at bat and the Nats had cut the Giants' lead in half. 2-1. Bumgarner retired the next three Nationals in a 12-pitch inning that had him at 81 pitches total in 7.0 IP. Ryan Mattheus gave up a leadoff walk, but got a fly to center from Angel Pagan and a double play grounder from Marco Scutaro to end a scoreless seventh. Madison Bumgarner's 13-pitch top of the eighth had him at 94 pitches overall on the night with a 2-1 lead in tact after seven and a half.

• Things Get Ugly: The Giants added a run in the bottom of the inning of Drew Storen. Melky Cabrera doubled for the 25th time this season, took third on a wild pitch and scored on a sac fly by Pablo Sandoval that turned it back into a two-run game. 3-1 Giants. Buster Posey walked before Sandoval's sac fly, and scored on the second of two singles Storen surrendered before leaving the game with one down. 4-1 Giants in AT&T. Hunter Pence scored on the third straight one-out single by the Giants, this one by Brandon Crawford. 5-1 San Francisco. Angel Pagan beat out a ground ball to short for an RBI infield single and a 6-1 Giants' lead after eight.

• CG: Madison Bumgarner came back out for the ninth. A 91 mph fastball up high got Ryan Zimmerman swinging for Bumgarner's 6th K and the first out of the ninth. Jayson Werth walked with one down, pushing the Giants' left-hander up to 103 pitches, but Adam LaRoche grounded out and Tyler Moore flew out to end it. 6-1 final. Complete game for Bumgarner... 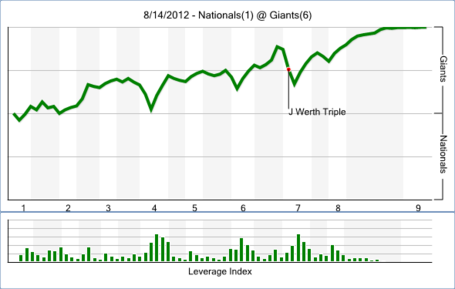