Share All sharing options for: Washington Nationals Take Two Of Three In AT&T With 6-4 Win Over San Francisco Giants. Stephen Strasburg Wins No. 14.

• #LomboLobby<3'sIt: Steve Lombardozzi did it again, sending a blooper to short right for a leadoff single and his fourth hit in nine at bats in the series in San Francisco's AT&T Park. Giants' right-hander Tim Lincecum got out no.1 on a groundout by Bryce Harper that moved Lombo into scoring position in front of Ryan Zimmerman, who K'd swinging, but a two-out infield single by Adam LaRoche put runners on the corners for Michael Morse. Excitement early in AT&T. Morse took a full-count fastball for ball four and a two-out walk. Bases loaded. Jayson Werth waited for a 1-1 bender from Lincecum to break then reached out and lined it to left for a two-out, two-run bloop single and a 2-0 Nats' lead early in the finale with the Giants. Stephen Strasburg came out throwing mid-90's heat in the bottom of the inning and three groundouts to the right side got him through the opening frame after just 13 pitches. 38 pitches for Lincecum in the first.

• GoLomboGo: Lombardozzi was 5 for 10 two innings into the third game of the series with San Francisco when he doubled to center field off Lincecum with one down in the second. Double no.15 of 2012 for Lombo, but he was stranded at third two outs later after Bryce Harper grounded to short and Zimmerman K'd swinging. A 12-pitch frame had Lincecum at 50 pitches total after two. Stephen Strasburg missed with a 3-1 pitch to Buster Posey and walked the Giants' catcher in front of Hunter Pence, then missed with a 3-1 pitch to Pence, issuing ack-to-back walks to start the bottom of the second. A single by Brandon Belt loaded the bases. A filthy 0-2 change outside got Gregor Blanco to chase for out no.1, but Brandon Crawford took the third of three-straight changeups he saw to right, reaching down and sending a single out to Jayson Werth to bring two runs in and tie it before Strasburg could get out of the second. 2-2 game in AT&T.

• 13 For No.8: Adam LaRoche lined a 3-1 two-seamer to center for a double that fell in in front of Angel Pagan. LaRoche's 25th double started the Nats' third. A fly ball to Hunter Pence on the track in right by Michael Morse advanced LaRoche to third. A low full-count slider got Jayson Werth to chase for out no.2 and Lincecum's 4th K. Danny Espinosa managed to foul off a nasty 2-2 slider then took the next pitch to center field, hitting it so hard Lincecum flinched at the crack of the bat and then watched it sailed out to center field in AT&T, three rows deep into the stands for a two-out, two-run home and a 4-2 Nationals' lead. HR no. 13 of 2012 for the Nats' no.8. Giants' 3B Pablo Sandoval ripped a one-out double to right in the bottom of the third. Strasburg followed up two mid-90's fastballs with a cruel 3-2 curve that tied Buster Posey in knots and busted Hunter Pence inside with a 2-2 two-seamer that struck Pence out to strand Sandoval and end an 18-pitch frame. 58 pitches overall for Strasburg.

• 3 for 3: Grounder to right. Single. 3 for 3 for Lombardozzi vs Lincecum. 6 for 11 in the series. Bryce Harper, however, was 0 for 3 today after he lined out to left, leaving the 19-year-old outfielder 2 for 11 four innings into game three of three in AT&T. Ryan Zimmerman battled for eight pitches before striking out for the third time in three at bats today. Lombardozzi stole second as Zim K'd and took third on a wild pitch to Adam LaRoche, but was stranded when the Nats' first baseman grounded out to end the top of the frame. 4-2 Nats in the 5th. A 22-pitch 4th has Lincecum at 96 pitches overall. Strasburg started the bottom of the frame at 58. Three pitches later the Nats' starter had two outs, but he walked Brandon Crawford in a six-pitch, two-out AB before striking Joaquin Arias out with a 2-2 change to end a 14-pitch frame at 72 pitches total through four.

• Not A Homer: The cement lining the top the brick wall in right field in AT&T is in play, so it was only a double by Michael Morse when he bounced one off the top of it to start the fifth inning. It was officially called double no. 15 of the year for the Nats' OF after it was reviewed. Morse scored when Jayson Werth sent an RBI single back up the middle to give the Nationals a three-run lead with his third RBI. 5-2 Nationals in the fifth. Werth was stranded, however, when Kontos retires the next three batters in order. Strasburg walked Pablo Sandoval with two down in the GIants' fifth, issuing his fourth walk in 4.2 IP, but a 2-2 bender froze Buster Posey for out no.3 and K no. 6 in 5.0 IP. 89 pitches overall for the #Nats' right-hander. 5-2 Nationals after five in San Francisco.

• Duck, Hunter: Giants lefty Jose Mijares threw a scoreless top of the sixth for the Giants. Stephen Strasburg scared Hunter Pence with sharp, drops off-the-table, first-pitch curve that started at his left shoulder and broke in for a strike that had the San Francisco outfielder ducking for cover. Two pitches later Strasburg struck Pence out with an 0-2 change. K no. 7. That wasn't nice, Stras. Brandon Belt flew to left for out no.2. Gregor Blanco singled with two down, but a rangy play by Danny Espinosa in short right on a grounder by Brandon Crawford helped Strasburg through a 10-pitch inning after which he was up to 100 pitches overall and up 5-2 on the Giants.

• LSD: "Left Side" Danny Espinosa was 2 for 3 with a home run and a double after a two-base hit off Giants' right-hander Santiago Casilla in the top of the seventh. Double no.29 of 2012 for the Nationals' second baseman, and Jayson Werth, who'd walked, took third on Espinosa's hit before scoring on a sac fly by Kurt Suzuki. 6-2 Nationals after six and a half. Ryan Mattheus took over for Strasburg in the bottom of the inning, throwing a 15-pitch, 1-2-3 frame. Still 6-2 Nationals.

• LOMBO!!!!: Steve Lombardozzi was 4 for 5 today after a leadoff double off Javier Lopez in the Nationals' eighth. A ball in the dirt with Bryce Harper up allowed Lombo to take third. 7 for 13 in the series for Lombo. Ryan Zimmerman got an intentional walk after Harper K'd swinging. Adam LaRoche K'd swinging too. The Giants went with right-hander Clay Hensley with runners on the corners and two out for Michael Morse and Hensley popped the Nats' slugger up with one pitch. 6-2 Nationals after seven and a half. Nats' lefty Sean Burnett gave up a leadoff single on an 0-1 change to Pablo Sandoval in the bottom of the inning. Buster Posey took a 2-2 sinker to right for a double that put runners on second and third. Hunter Pence hit an 0-1 sinker right back to Burnett, who looked Sandoval back and threw to first for the first out. Brandon Belt K'd swinging at a 2-2 change for out no.2. Gregor Blanco hit a sharp grounder to second and beat the throw from Lombardozzi. 6-3 game. Davey Johnson came out to argue, but to no avail. 6-3 after eight when Brandon Crawford Ks swinging.

• Ready or Not: Tyler Clippard took the mound in the ninth looking for save no. 25 of 2012. Marco Scutaro flew out to Harper. ONE!! Angel Pagan grounded out to second. TWO!! Pinch hitter Hector Sanchez... singled to right? Two-out hit for the GIants' bench bat. Pablo Sandoval vs Clippard? Pop up over the infield. Adam LaRoche makes the ca--- He drops it! Run scores. 6-4. Tying run at the plate. Tyler Clippard threw a 2-1 fastball by Buster Posey upstairs and got a foul tip strike three to end it. Nats win, 6-4 final. Save no. 25. Win no. 73. 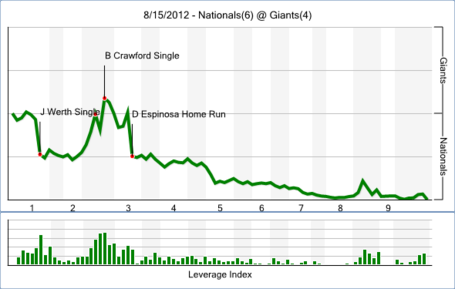