Share All sharing options for: Grand Slam By Michael Morse, Two-Run Blast By Bryce Harper The Difference In 6-4 Win Over New York Mets.

• Two-Out Rally: David Wright's two-out single started a first-inning rally for New York's Mets in the first game of three this weekend in Washington, D.C. Scott Hairston and Daniel Murphy followed with a two-out double and RBI single, respectively, with Murphy's hit driving in two runs in what ended up being a 22-pitch opening frame for 26-year-old Nationals' left-hander Ross Detwiler. 2-0 early for the visiting Mets. NY lefty Johan Santana needed just 15 pitches to retire the Nationals in order in the bottom of the first inning, setting Jayson Werth, Bryce Harper and Ryan Zimmerman down in order...

• Zim. Can. Pick it: Ryan Zimmerman made a diving play to rob Kelly Shoppach of a hit to left for the first out of the Mets' second. After a 22-pitch first, Ross Detwiller threw a quick 10-pitch, 1-2-3 top of the second, recording three ground ball outs in a relatively quick frame, but Johan Santana set the fourth, fifth and sixth-straight batters down in the bottom of the inning to finish two frames on 32 pitches as well with a 2-0 lead over Detwiler and the Nats.

• Hairston?: Detwiler gave up a two-out double by Scott Hairston (2 for 2, 2 2B) in the top of the third, but got a groundout to second from Daniel Murphy to complete a 16-pitch inning at 48 pitches overall. After Johan Santana retired the first six Nationals he faced, Nats' skipper Davey Johnson had the left-hander cover the gold lettering or logo on the back of his glove with blue tape before the start of the third inning. The veteran starter wasn't distracted, however, as he completed his third scoreless frame without allowing a hit by the Nats. 2-0 NY after three in Nationals Park.

• MORSE CRUSH!!: Ross Detwiler's 11-pitch 1-2-3 4th left him at 59 pitch overall after 4.0 IP, having set down 10 of the last 11 batters after the Mets' two-out rally in the first. In the bottom of the inning, Jayson Werth led off with a single to break up Santana's no-hit bid after nine-in-a-row retired. Bryce Harper followed with the second hit of the night on a line drive single to center to put two on for Ryan Zimmerman and Zim's low liner went right over Johan Santana's shoulder, off the second base bag and into center to load the bases in front of Michael Morse. The Nats' big middle of the order bat, who was 0 for 1 on the night and 0 for 9 in his career vs Santana, entered tonight's game with a .367/.361/.633 line and two home runs in bases loaded AB's over the course of his career and Morse went the other way with a high 1-1 fastball from Santana for an opposite field grand slam that sailed over the out-of-town scoreboard in Nationals Park to give the Nats a 4-2 lead over the Mets after four. Morse's 12th HR of 2012, another oppo-boppo blast.

• Run Faster, Harper!!: Ruben Tejada slid in headfirst at second, just beating Michael Morse's throw in from left for the third double of the night off Detwiler with one down in the fifth. Tejada took third on a fly to right that Jayson Werth tracked down, but was stranded when David Wright grounded to Zimmerman at third to end a 14-pitch frame that had Detwiler at 73 pitches overall after 5.0 IP. 13 of 15 batters set down after the first. Jayson Werth hit a two-out single off Santana in the Nationals' fifth. Bryce Harper followed with a line drive to right on an 0-1 fastball that went out over the out-of-town scoreboard in a hurry for a two-out, two-run HR and a 6-2 Nats' lead. Harper's 11th HR of 2012 left him 2 for 3 tonight after he ended the series in San Francisco on an 0 for 11 streak.

• #scottfranzkeisapoplectic: Scott Hairston lined to the left-center gap for his third double in three at bats tonight and the sixth Mets' hit off Ross Detwiler. The Mets' outfielder took third on a groundout by Daniel Murphy and scored the Mets' third run when Ronny Cedeno sent out no. 2 out to short. Detwiler threw a total of 11 pitches in the sixth inning, retiring three-straight after Hairston's two-base hit. 6-3 Nationals after five and a half. Mets' right-hander Manny Acosta took over in the bottom of the sixth, giving up a two-out walk to Danny Espinosa before completing a 10-pitch inning of relief work for New York.

• Shoppach Bag: Catcher Kelly Shoppach took a 2-0 fastball from Craig Stammen to left field for his first hit and home run as a New York Met in the first at bat of the seventh. Shoppach's 6th of 2012 made it a 6-4 game in the Nationals' favor. Stammen retired the next three batters in order, getting Andres Torres looking at a 0-2 curve that ended a 13-pitch top of the seventh. Roger Bernadina singled off Manny Acosta to start the bottom of the seventh, moved to second on a one-out walk by Bryce Harper and got thrown out at third when he and Harper attempted a double steal with Ryan Zimmerman at the plate. Zimmerman's groundout to short ended the seventh.

• STOREN ALERT!!: Drew Storen gave up a leadoff single by David Wright in the top of the eighth, but got a ground ball to third from Scott Hairston in the next AB on which Ryan Zimmerman turned a slick 5-4-3 for the first two outs of the top of the frame. A groundout to second by Daniel Murphy ended a nine-pitch inning by the Nats' right-hander. Mets' righty Ramon Ramirez retired the Nationals in order in the bottom of the eighth. Still 6-4 Nationals after eight innings in Nats Park.

• Ready or Not: Tyler Clippard came out for the ninth looking for save no. 26 of 2012 and issued a leadoff walk to Ronny Cedeno to bring the tying run to the plate. Ike Davis K'd swinging for out no.1. ONE!! Kelly Shoppach K'd swinging through an 0-2 change. TWO!!! Jordany "The Nat Killer" Valdespin stepped in with one on and two out and got ahead 3-1 as Clippard got a little wild, and took a fastball outside for the second walk of the inning. Two on, two out for the Mets. Clippard was up to 19 pitches. Ruben Tejada took the first pitch he saw to left to Michael Morse, who caught out no.3 of the Mets' ninth to end the series opener. 6-4 final. The Nationals' 74th win. 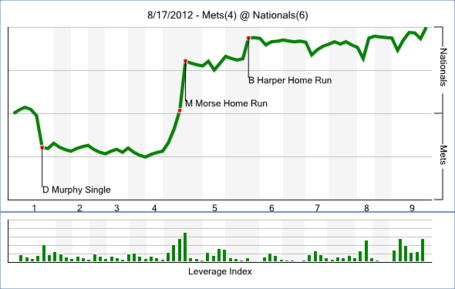