• "The Raindrops, The Raindrops, The Raindrops" - Radiohead: Rain delayed the start of the series finale with New York for two hours and twenty-six minutes this afternoon, but at just after 4:00 pm EDT, Nationals' lefty Gio Gonzalez took the mound and threw a strike to Mets' leadoff man Andres Torres to start the third game of three for NY in Washington, D.C. Gonzalez retired Torres, but gave up one and two-out singles to Justin Turner and Scott Hairston, respectively, to bring Ike Davis to the plate with two on and two out. Davis flew to left center on a 94 mph full-count fastball from Gonzalez, stranding two at the end of a 27-pitch inning. Two pitches into the bottom of the first the Nationals had their first hit off Mets' right-hander Jeremy Hefner when Jayson Werth lined to center for a leadoff single, but three outs later Werth was stranded at first when Hefner completed a 12-pitch frame.

• Grounder. Desmond. Out: Gio Gonzalez got the first two outs of the second with three pitches when Ronny Cedeno and Jason Bay both rolled grounders out to Ian Desmond at short, but Mets' catcher Kelly Shoppach took a 1-1 two-seamer back up the middle for New York's third hit off the Nationals' starter in 1.2 IP. A weak one-hopper to second was easily playable for Danny Espinosa, who threw to short for a force to end an eight-pitch inning by the Nats' left-hander. Michael Morse hit an 0-1 two-seamer back up the middle for the Nationals' second-straight leadoff single off Hefner in the bottom of the frame and Danny Espinosa got hold of an 0-1 curve in the next at bat, sending an opposite home run screaming out to left and into the entrance to the visitor's bullpen. Two-run blast. 2-0 Nats after two on Espinosa's 14th HR of 2012.

• Leadoff Walks, Grrrrr!: Gio Gonzalez walked Andres Torres to start the third after his teammates gave him a lead to work with in the bottom of the second. Two outs later Scott Hairston collected his second hit of the game (and fifth in six at bats this series) on a line drive to left field that put two on in front of Ike Davis for the second time today. A looping 2-2 curve got Gio Gonzalez a weak groundout to first and his third scoreless frame. The 18-pitch inning had the Nats' lefty at 56 pitches overall. Jayson Werth was 2 for 2 with leadoff singles in the first and third after he lined to center to start the Nats' third. Bryce Harper followed with an RBI triple (no.6?) off the out-of-town scoreboard in right that brought Werth around and Harper then scored himself on an RBI single to left by Ryan Zimmerman that made it 4-0 Nats in the bottom of the third. Zim took second on a fly to left by LaRoche and third on a wild pitch by Hefner but was stranded there at the end of the third inning.

• Leadoff Triple, But Gio Escapes: Ronny Cedeno lined a 1-1 fastball to right, over Jayson Werth's head and to the wall for a leadoff triple in the top of the fourth. Triple no.1 of 2012 for the Mets' infielder. Jason Bay K'd swinging through a 3-2 fastball upstair for out no.1 of the fourth and K no.1 of Gio Gonzalez's 25th start. Kelly Shoppach flew to right for out no.2, but not deep enough to bring Cedeno in and Jeremy Hefner K'd swinging at a cruel 2-2 bender that ended a 17-pitch inning with the Mets' runner still at third. 4-0 Nationals after three and a half. Gio singled to right for an opposite field hit with two down in the Nats' fourth, but Jayson Werth's fly to right ended the inning.

• Wait for it, Andres!!: Andres Torres nearly jumped out of his shoes on a 1-2 bender from Gio Gonzalez that dropped out of mid-air. 3 Ks for Gio. Ryan Zimmerman backhanded a grounder from Justin Turner and bounced a throw to LaRoche for out no.2, but David Wright took a 1-0 fastball back up the middle for a single to push Gio Gonzalez up to 82 pitches in the fifth. Scott Hairston started down 0-2 to Gio, but worked the count full before flying out to left to end the Nationals' left-hander's 5th scoreless frame. 4-0 Nats in Nationals Park. 90 pitches overall for Gonzalez, however.

• Run Faster, Harper!!!: Jeremy Hefner tried to throw a 1-2 change by Bryce Harper in the first at bat of the Nats' fifth, and the 19-year-old outfielder absolutely crushed it, sending a line drive to right over the out-of-town scoreboard and off the facade of the second deck to make it 5-0 Nationals. HR no.12 of 2012 for the 2010 no.1 overall pick. Hefner hit Michael Morse with two down, but managed to escape the fifth without further damage.

• Gio's Done: Ike Davis doubled to right to start the top of the sixth with the Mets' seventh hit off the game off Gio Gonzalez, took third on a fly to center by Ronny Cedeno and scored on a groundout to short by Jason Bay. 5-1 Nationals after the Mets got on the board. A two-out walk to Kelly Shoppach pushed Gio up to 110 pitches and ended his night after 5.2 IP, 7 H, 1 R, 1 ER, 2 BB, 3 Ks, 110 P, 67 S, 7/7 GO/FO. Right-hander Craig Stammen took over on the mound against pinch hitter Ruben Tejada and popped the infielder up to end the top of the sixth, 5-1 Nationals. Manny Acosta took over for NY in the bottom of the inning and retired the Nationals in order in a 13-pitch frame.

• 5-4-3: Craig Stammen gave up back-to-back one-out singles by Jason Turner and David Wright to bring Scott Hairston up with two on, but the Mets' outfielder grounded sharply to third to start an inning-ending 5-4-3. 1.1 scoreless for Stammen. Manny Acosta popped Jayson Werth up for the first out of the seventh before he was lifted in favor of lefty Josh Edgin. Bryce Harper flew to left on the first pitch he saw for out no.2. Ryan Zimmerman just missed a home run into the Red Porch seats, but settled for a double off the bright yellow W.B. Mason sign in center field. Zim's 28th double of 2012. Adam LaRoche stepped in with a runner on but flew out to right to end the seventh.

• FINISH THEM!!!: Michael Gonzalez got one pitch with one out when Ike Davis flew to left to start the eighth, but Ronny Cedeno doubled in the next at bat for the Mets' 10th hit of the game. The Nats' left-handed reliever got a groundout to second from Jason Bay for out no.2, but Kelly Shoppach snuck a sharp grounder under Ryan Zimmerman at third for an RBI hit that made it 5-2 before Gonzalez got Daniel Murphy looking with an 0-2 fastball for out no.3 of the Mets' eighth. Bobby Parnell needed 14 pitches to retire the Nationals in order in the bottom of the eighth. Still 5-2 and time for Clippard.

• Clipp'd: Tyler Clippard came out for the top of the ninth looking for save no. 27 of 2012. Jordany Valdespin K'd swinging through a two-strike change!! ONE!!!! Justin Turner got ahead 3-1 on the Nationals' closer, fouled a few off and flew out to Bryce Harper in center field to end a seven-pitch at bat. David Wright flew to center. THREE!! The Nationals win. Save no. 27 of 2012 for Clippard. Win no. 16 for Gio. 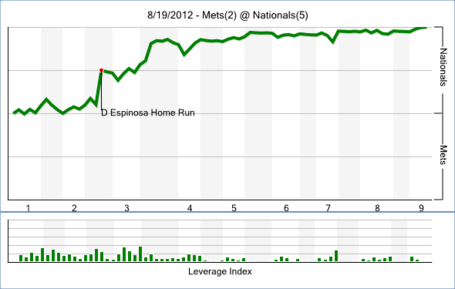