• Detwiler ('07 1st Rounder): Philadelphia Phillies' second baseman Chase Utley entered tonight's game 2 for 7 with a double in his career vs Washington Nationals' '07 1st Round pick Ross Detwiler. Utley hit a line drive, two-out single to left on a 96 mph 1-2 fastball from Detwiler in the top of the first inning of the series finale of the three-game set in the nation's capital, but three pitches later the Nats' 26-year-old starter got a groundout to second from Carlos Ruiz to complete a scoreless 14-pitch opening frame.

• Don't Run On Harper!: An E:5 on Ryan Zimmerman put Phillies' first baseman Ty Wiggington on to start the top of the second. Ross Detwiler got a grounder to third and a force at second in the next at bat, erasing Wiggington, but the Nationals couldn't turn a double play on John Mayberry. A walk to Domonic Brown put two on for Phillies' center fielder Michael Martinez, who singled to right, but Bryce Harper came up throwing and nailed Mayberry at home when the Philly right fielder tried to score from second. Strong throw in from Harp and Sandy Leon made the catch and tag. "You'rrree out," yelled home plate ump Marvin Hudson. Don't run on Harp, Mayberry. Two down, and Hamels K'd looking to end a 14-pitch second.

• No.20: Nats' 1B Adam LaRoche got a hold of a 91 mph first-pitch fastball from Cole Hamels in the bottom of the second and hit his 20th HR of 2012 into the upper deck in right field to give the Nationals a 1-0 lead. Jayson Werth lined a 1-2 fastball through short for a single off Hamels in the next at bat and Sandy Leon followed with the third-straight hit, sending an 0-1 change back up the middle to put two runners on with no outs. Three straight strikeouts followed as Hamels got Steve Lombardozzi looking and Detwiler and Danny Espinosa swinging to end a 23-pitch inning. 1-0 Nats.

• Start Streak: Ross Detwiler gave up a one-out single and a walk, but completed his third scoreless frame, popping Carlos Ruiz up and getting Ty Wiggington to ground weakly to third to end a 15-pitch inning at 44 pitches overall. Ryan Zimmerman and Michael Morse got hard-hit grounders through the Phillies' infield for back-to-back one-out singles in the Nationals' third. Adam LaRoche, who homered in his first at bat, was 2 for 2 when he singled to center the second time up, scoring Zimmerman from second for a 2-0 Nationals' lead. Morse and LaRoche both moved up on the play when Michael Martinez made an ill-advised throw home, so Jayson Werth's groundout to second brought home the Nats' third run. 3-0 Nats when Morse came in. 20-pitch third by Hamels, who's at 58 after 3.0 IP.

• Moar Det Domination: Ross Detwiler threw an eight-pitch, 1-2-3 4th to complete four scoreless on 52 pitches. 3-0 Nationals. Cole Hamels needed just 12 pitches to retire the Nationals in order in the bottom of the inning, adding K's no. 6 and 7 when he got the opposing pitcher and Danny Espinosa swinging to end the Nationals' fourth. 70 pitches through four innings pitched for Hamels. Ross Detwiler returned the favor, striking Hamels out for the second time in two at bats. Two quick outs later, the Nats' left-hander was through a 12-pitch fifth with 5.0 scoreless vs the Phillies. 65 pitches overall, eight Phillies in a row set down. Cole Hamels threw 10 pitches in the bottom of the inning, retiring the Nats in order and collecting his eighth K along the way. 80 pitches through five.

• LaRoche pwns Hamels: An 11-pitch, 1-2-3 6th had Ross Detwiler at 77 pitches overall after 6.0 scoreless in which he'd struck out three, given up three hits and two walks, and he'd retired 11-in-a-row going back to a one-out walk to Chase Utley in the Phillies' third. Cole Hamels had set eight-in-a-row down before Adam LaRoche singled to start the sixth with his third hit in 3 AB's against the Phillies' lefty. The Nats' first baseman took third on a one-out double by Sandy Leon, but got thrown out and doubled up trying to tag and score on a line drive to right by Steve Lombardozzi. John Mayberry made the catch and throw in time to get the slow-footed LaRoche. 9-2 DP, 3-0 Nats after six.

• 14!!!!!: Mayberry and Domonic Brown were the 12th and 13th batters in-a-row set down by Ross Detwiler. A groundout to second by Michael Martinez ended the Nats' lefty's seventh scoreless frame after 11 pitches. 88 pitches overall for Detwiler, who's done when Tyler Moore hits for him to start the bottom of the inning...

• STRAIGHTEN THAT CAP!! 17!!!: Cole Hamels needed 10 pitches to retire the Nationals in order in the bottom of the seventh, after which he was up to 101 pitches on the night but still down 3-0. Nats' lefty Sean Burnett took over on the mound and set the 15th, 16th and 17th Phillies in-a-row down in a 10-pitch, 1-2-3 inning. Michael Schwimer came on to pitch the bottom of the eighth, giving up a leadoff walk to Ryan Zimmerman and a two-out walk to Jayson Werth before striking Sandy Leon out to end the eighth inning in D.C. Still 3-0 Nats.

• Clipp'd: Tyler Clippard came on in the ninth, looking for save no. 21 of 2012. Chase Utley walked in a seven-pitch AB to break the streak of 17 Phillies in a row set down. Jayson Werth tracked down a fly to center by Carlos Ruiz for out no.1. ONE!!! Former National Laynce Nix popped up to Ryan Zimmerman. TWO!!! Nate Schierholtz stepped in with a runner on and two out and walked to bring Ryan Howard up as the tying run. Clippard got ahead 0-2 and got a called strike three on the Phillies' slugger. 3-0 Nats. Clippard's 21st save. 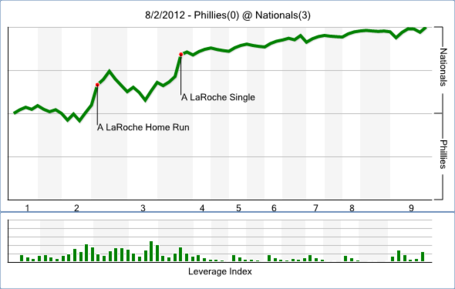