• "I'm gonna fight 'em off...": Stephen Strasburg made his way in from the bullpen in right field just before 7:00 pm EDT, warmed up and ready for his 25th start of 2012. The Nats' '09 no.1 overall pick received a rousing ovation from the fans in Nats Park that were already in their seats along the first base line. The 24-year-old right-hander started the game with a 96 mph fastball that was called strike one on Michael Bourn and then finished the first batter of the night off with a brutal 91 mph 1-2 change outside that had the Atlanta Braves' center fielder flailing and walking back to the third base dugout. Strasburg got behind Jason Heyward and gave up a two-out single to center on a 97 mph 3-1 fastball, but the Nats' starter caught Freddie Freeman's liner back to the mound at his hip and tossed it dismissively behind him as he left the field with a scoreless, 19-pitch top of the first. Braves' starter Paul Maholm needed just 15 pitches to retire the Nationals in order in the bottom of the frame.

• Ian. [Expletive Deleted]. Desmond: Dan Uggla entered tonight's game 8 for 15 with two doubles, two home runs, three walks and five Ks vs Strasburg in their respective careers. Uggla headed back to the bench 8 for 16 with six Ks after the Nats' right-hander got Uggla swinging with a brutal 83 mph 2-2 bender immediately after a 99 mph 1-2 heater. K no. 2 for Strasburg in 1.1 IP. Brian McCann took a 3-1 fastball back up the middle for another single to center, but a diving 1-2 change got Juan Francisco chasing for out no.2 and K no.3 and a 2-2 fastball to Paul Janish was popped up to short as Strasburg completed his second scoreless frame on 20 pitches. 39 pitches total after 2.0 IP. Paul Maholm retired the fourth and fifth-straight batters to start the game when he put Michael Morse and Adam LaRoche down in the bottom of the second, but an 0-1 four-seamer to Ian Desmond ended up flying over the visitor's bullpen, over the Harris Teeter sign on the back of the bullpen wall and into the stands for a solo HR and a 1-0 Nats' lead. Desmond's 19th of 2012. Nats up 1-0 after two.

• 51 Minutes Later: A 97 mph 1-2 fastball got Paul Maholm swinging for the first out of the third and K no.4 for Stephen Strasburg. Michael Bourn sliced a fly to left for out no.2. Then the rain came... or at least picked up to the point that they finally stopped play...7:43 pm EDT... Rain Delay in D.C. 8:34 pm EDT. The game resumed just under an hour [51 minutes] later, with Strasburg back on the mound against Martin Prado, who K'd flinching on a wicked 1-2 change that completely fooled and probably embarrassed the Braves' left fielder. 12-pitch, 1-2-3 inning with a 51 minute delay in the middle. 51 P, 5 Ks. 1-0 Nationals after two and a half. Paul Maholm retired the Nats in order in the bottom of third, setting Jesus Flores, Strasburg and Jayson Werth down on 10 pitches.

• Stras. Burg: Stephen Strasburg dropped a 1-2 bender in over the top to get to a 2-2 count with Jason Heyward then threw a change outside that dove away from the Braves' left-handed hitting outfielder and got him swinging. 6 Ks. After starting up 0-2, the Nationals' starter missed with three pitches to Freddie Freeman before missing again outside with a fastball and walking Atlanta's first baseman. Dan Uggla flew to left for out no.2 (8 for 17 vs Stras) and Brian McCann took an 0-2 change inside that was called strike three to end the inning and strand Freeman at first. 17 pitches, 2 Ks in the Braves' fourth, 68 pitches and 7 Ks overall for Strasburg through four. Paul Maholm abused Bryce Harper with breaking balls to get the 19-year-old Nats' outfielder swinging to start the bottom of the inning. Ryan Zimmerman missed hitting a home run by a few feet on a long fly to left, but he hit it so hard he was thrown out at second when Martin Prado played it smoothly off the wall and made a strong throw back in. A swinging K from Michael Morse ended the fourth, and the Nationals had just two hits after four innings against the Braves' left-hander.

• JESUS, He Crushed That Pitch!: A 1-2 change outside got Juan Francisco to chase. EIGHT! Strasburg tried to get Paul Janish to chase an 0-2 heater up high, then decided to throw him a heater down the pipe which the light-hitting infielder took for a called strike three. NINE!! A 96 mph 2-2 fastball to Paul Maholm set the opposing pitcher down as Strasburg struck out the side on 13 pitches. 10 K's total in 5.0 IP. 81 pitches through five. Adam LaRoche drove a 1-0 fastball through the right side of the infield for the Nationals' third hit of the night, which was followed by a double to the right-center gap by Ian Desmond. No.25 of 2012 for Desmond. Danny Espinosa K'd swinging for the first out of the inning, but Jesus Flores connected with a 1-0 cutter from Maholm and sent his fourth home run of the year out to left, just over the wall and a leaping Martin Prado to make it 4-0 Nationals in the bottom of the fifth. Teh Jesus! Jayson Werth lined a two-out double off the base of the left field fence for the Nationals' sixth hit of the game. Double no.12 for Werth, but Bryce Harper K'd to end the fifth.

• One More For Strasburg: Martin Prado doubled for the 34th time this season with one down in the sixth on a first-pitch fastball from Strasburg that ended up in the corner in right field. Jason Heyward went with an 82 mph 2-2 bender outside and pushed it into left for a one-out single that sent Prado around to third and pushed Strasburg up to 89 pitches overall. A sac fly to center by Freddie Freeman allowed Prado to tag and score the Braves' first run and earned Strasburg a visit from pitching coach Steve McCatty, but the right-hander got help from his catcher when Flores threw Heyward out trying to take second on a pitch in the dirt. 4-1 Nats after five and a half. Strasburg was up to 94 pitches overall. Adam LaRoche took a two-out walk from Maholm, after the Braves' lefty retired Zimmerman and Morse to start the bottom of the sixth, but Ian Desmond grounded back to the mound to end the inning.

• Zim. Can. Pick it: Drew Storen took over in the seventh and with a little help from some Gold-Glove-worthy picking by Ryan Zimmerman at third, retired the Braves in order in a 4-pitch, 1-2-3 inning. Steve Lombardozzi hit a two-out single off Maholm, but the ATL lefty got Jayson Werth to fly to left to end the seventh. Sean Burnett took over for the Nats in the eighth, and put two runners on with one down before turning a 1-6-3 DP on a grounder back to the mound by Martin Prado. 4-1 Nationals after seven and a half. Braves' right-hander Chad Durbin struck out the side in the Nationals' eighth, keeping it a three-run game heading into the ninth.

• Ready or Not: Tyler Clippard came out for the ninth looking for save no. 28 of 2012, but started the inning by giving up a single to right by Jason Heyward. Heyward took second without a throw with Freddie Freeman at the plate. Freeman hit a grounder back to the mound that bounced off Clippard's glove and rolled out to Danny Espinosa, but the Nats' second baseman had no play. Ruled an error, E:1, and runners on the corners with no outs. Dan Uggla got behind 0-2 and popped out to Ryan Zimmerman in foul territory for out no.1. Brian McCann popped to Adam LaRoche for out no.2 and 33,888 rose to their feet and cheered as Juan Francisco stepped in and flew out to right to end it. Ballgame. 31 games over .500 and looking to sweep!! 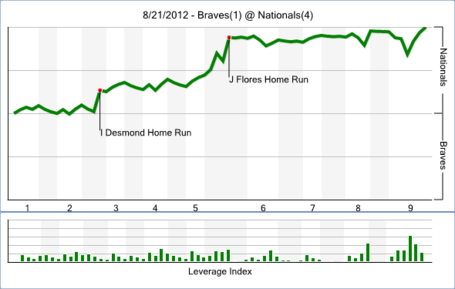