• Some Philly Fan Is Sure To Mention Utley/Lannan: Philadelphia Phillies' right-hander Kyle Kendrick entered tonight's start against Washington with a streak of 15.0 scoreless innings going over his last two outings. After a 27-pitch first tonight in Citizens Bank Park in which he gave up Bryce Harper's 17th double of 2012 and knocked Michael Morse out of the game with a HBP on Morse's right hand, the 27-year-old '03 7th Round pick had 16.0-straight scoreless innings in-a-row on the mound. Nationals' right-hander Edwin Jackson let the first three Phillies on in the bottom of the inning, giving up a single by Jimmy Rollins, a walk to Kevin Frandsen and an RBI single by Philly second baseman Chase Utley. Utley battled for eight pitches before lining to right to bring Rollins in and make it 1-0, but Jackson got Ryan Howard swinging with a filthy 2-2 slider for out no.1 and got Domonic Brown to ground into an inning-ending 4-6-3 that brought the Phillies' first to a close after a total of 24 pitches by E-Jax.

• Cy Kendrick: Kyle Kendrick threw just 13 pitches in the top of the second as he set the Nationals down in order to complete his 17th-straight scoreless inning on the mound. After Laynce Nix hit a one-out single, Kendrick picked up the bat and connected for his first double since 2010, lining a 2-2 slider to left to send Nix around to third. E-Jax got a line drive to second out of Jimmy Rollins, though and completed a scoreless second after 21 pitches. 45 pitches overall for Jackson in 2.0 IP. Jackson singled to start the Nationals' third, but three quick outs later he was stranded as Kendrick completed his 18th-straight scoreless inning. Ryan Howard hit double no. 7 of 2012 off the W.B. Mason sign in left-center in CBP with two down in the Phillies' third, but E-Jax dropped a 2-2 slider on Domonic Brown for a swinging strike three and a scoreless third after which it was still 1-0 Philadelphia.

• Rollins vs E-Jax: Roger Bernadina took over for Morse after the first inning HBP, and walked in an eight-pitch AB to start the top of the fourth, taking second on a one-out groundout by Jayson Werth before he was stranded when Danny Espinosa grounded out to Chase Utley at second to end Kendrick's 19th scoreless inning in-a-row. The 18-pitch inning had Kendrick at 70 pitches with a 1-0 lead after 4.0 IP. John Mayberry started the Philadelphia fourth with a bloop single to center for the Phillies' fifth hit of the night off Edwin Jackson. Laynce Nix walked in the next AB as E-Jax put the first two batters on for the second time tonight. Phillies' catcher Erik Kratz K'd chasing a 2-2 slider outside in front of Kyle Kendrick, whose bunt put both runners in scoring position for Jimmy Rollins. Rollins' two-out RBI single off E-Jax brought both runners in to make it a 3-0 Phillies' lead in Citizens Bank Park. The 22-pitch inning had E-Jax up to 85 pitches.

• Harper Double No. 18: A 10-pitch top of the 5th had Kyle Kendrick at 80 pitches overall after 20.0 scoreless innings pitched. After laboring all night, Edwin Jackson retired the Phillies in order in the bottom of the inning, throwing a 10-pitch frame of his own which had him up to 95 pitches overall. Bryce Harper doubled for the second time tonight in the top of the sixth, taking a 1-1 change to right for his 18th two-base hit of 2012. Three outs later, however, Kendrick had his 21st scoreless inning in a row after he'd set Ryan Zimmerman, Roger Bernadina and Adam LaRoche down in order to complete a 14-pitch inning at 94 pitches overall.

• PH Your Streak: Roger Bernadina retreated to the track, but came in two steps to catch the first out of the Phillies' sixth off John Mayberry's bat. Laynce Nix never could lay off the slider in the dirt and he K'd chasing one for out no.2 of the inning and K no.8 of the game for Edwin Jackson. Erik Kratz flew out to Bryce Harper and Jackson had suddenly retired seven-straight. The 12-pitch frame had him at 107 pitches total. Jayson Werth battled Kendrick for seven pitches before swinging at a 2-2 cutter and missing for the first out of the seventh. A groundout by Danny Espinosa gave Kendrick two outs, but he missed inside with a full-count fastball to Kurt Suzuki and issued his second free pass of the game with two down. Tyler Moore hit for Edwin Jackson in the next at bat, and the hard-hitting bench bat took an 0-1 sinker to left and just over the wall for a two-run HR. No.7 of 2012 for Moore. 3-2 game after six and a half. Kendrick's streak is over. Ryan Mattheus took over for E-Jax in the bottom of the inning and retired the 10th-straight Phillie going back to the fourth. Still 3-2 Philadelphia.

• Charlie Manuel Likes Walks To Mound, Sunsets: Antonio Bastardo started the eighth against Bryce Harper, striking the 19-year-old out with a 94 mph four-seamer on the eighth pitch of the at bat. Josh Lindblom came on to face Ryan Zimmerman and walked the Nats' third baseman, prompting Phillies' skipper Charlie Manuel to make another pitching change. Lefty Raul Valdes came on to face left-handed hitting outfielder Roger Bernadina, and gave up a single to center that put two on for Adam LaRoche. Valdes got LaRoche swinging, prompting another pitching change to bring in a right-hander to face Werth. B.J. Rosenberg came on trying to keep the one run lead in tact and struck Werth out with a high, 96 mph 2-2- heater to keep it 3-2.

• Chase. Utley.: Nats' lefty Michael Gonzalez walked Chase Utley in a five-pitch AB, then let him steal second with Ryan Howard at bat. Howard's single to right on a 3-1 fastball brought Utley around and the Phillies took a 4-2 lead in the bottom of the eighth. Drew Storen took over with one down and got a double play grounder out of John Mayberry to end the bottom of the eighth. Jonathan Papelbon came out for the ninth looking for his 28th save of 2012. Danny Espinosa worked the count full and singled off Chase Utley and into right. With Kurt Suzuki up, Espinosa got thrown out by Erik Kratz inexplicably trying to steal second. Suzuki K'd swinging at a 95 mph heater for out no.2. Newly extended bench bat Chad Tracy K'd swinging too and the Phillies took game one of three in CBP. 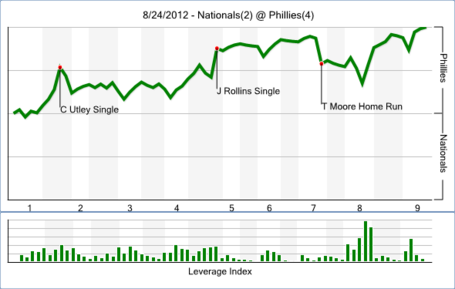