• "I'm from S-P, no mortal man can test me." - BT: Gio Gonzalez started the bottom of the first with a five-pitch walk to the Phillies' Jimmy Rollins after Roy Halladay had thrown an 11-pitch, 1-2-3 top of the inning against Washington in Citizens Bank Park. Kevin Frandsen worked the count full in the next at bat against the Nats' 26-year-old left-hander and lined a 93 mph four-seamer to right to send Rollins around to third with no outs in front of Chase Utley, whose single through second brought the Philadelphia's shortstop in to give the home team a 1-0 lead before an out was recorded. Steve Lombardozzi got to a grounder by John Mayberry in short center after it got through the middle of the infield, but he had no play and simply prevented a third run from scoring. 2-0 Phillies when Frandsen scored, but Erik Kratz K'd looking at a wicked 2-2 bender for out no.2, and Juan Pierre lined out weakly to short to end a 31-pitch opening frame by the Nationals' starter.

• Doc: Roy Halladay struck out the side on 19-pitches in the top of the second, getting Adam LaRoche with a curve and Jayson Werth with a change, but walking Roger Bernadina with two down before striking Danny Espinosa out with another bender that ended a 19-pitch inning which had Halladay at 30 pitches overall after two. Jimmy Rollins hit a two-out single off Gio Gonzalez in the Phillies' second, then stole second when Kurt Suzuki bobbled the ball on the transfer from mitt-to-hand, but the Nats' starter got Kevin Frandsen swinging to end a 12-pitch inning at 43 pitches overall. 2-0 Philadelphia. Kurt Suzuki flew out to start the third as the seventh of eight Nationals set down by Halladay to start the game. An 0-2 curve to the opposing pitcher made it eight of nine and one pitch later it was nine of ten as Steve Lombardozzi grounded out to end a six-pitch inning by the Phillies' right-hander. Gio Gonzalez's 18-pitch, 1-2-3 bottom of the third had him up to 61 pitches overall and down 2-0 to the Phillies in Citizens Bank Park.

• 1st Hit Then DP: Bryce Harper dropped a bloop single into short right-center in Citizens Bank for the first hit of the game off Halladay in the top of the fourth. Ryan Zimmerman lined to right in the next at bat, but right at Phillies' right fielder Michael Martinez and Harper stumbled around second when Jimmy Rollins deked him good and got thrown out at first on a 9-3 DP. A fly to center from Adam LaRoche ended Halladay's fourth scoreless after eleven pitches from the veteran Phillies' right-hander. Gio Gonzalez needed just nine pitches total to retired the Phillies in order in the bottom of the frame, with help from Ryan Zimmerman who fielded a swinging bunt that appeared to be foul and flipped a throw to first in time to get the speedy Martinez for out no.3. Still 2-0 Philly.

• Everybody <3's Lombo: Roger Bernadina connected with a full-count cutter and sent a low liner to center on the ninth pitch from Roy Halladay in the Nats' outfielder's one-out AB in the fifth. Bernadina stole his 14th base of 2012 with Danny Espinosa up at bat, but had to stay at second when Espi grounded to short and beat the throw to first in spite of a diving effort by Jimmy Rollins. Kurt Suzuki lined to left for the third-straight one-out single off the Phillies' starter, loading the bases in front of Gio Gonzalez. The Nats' starter grounded to Utley at second, who took the out at home, but Steve Lombardozzi came through with a two-out, two-run line drive to center that tied that game up after three and a half. 2-2 in Philly. Jimmy Rollins walked for the second time tonight with one down in the Phillies' fifth and Gio Gonzalez hit Kevin Frandsen to put two runners on, but Chase Utley popped up and Ryan Howard flew to center to end the fifth with the score still tied at 2-2. The 23-pitch frame had Gio at 93 pitches overall.

• Boo Werth, Will Ya?: Jayson Werth got booed as he stepped to the plate in Citizens Bank Park and lined a single through short with two down in the top of the sixth, but Roger Bernadina popped out to Jimmy Rollins in foul territory in left on the first pitch he saw to end a 12-pitch 6th that had Halladay up to 89 pitches. Gio Gonzalez start the sixth at 93 pitches. The 94th was crushed by John Mayberry, who took a 91 mph fastball for a ride to left and over the wall to make it 3-2 Phillies with his 12th HR. 10 pitches later Gonzalez was through an 11-pitch inning at 104 pitches overall on the night.

• Lombo? No.: Danny Espinosa ripped a line drive to center to start the seventh. A sac bunt by Kurt Suzuki moved Espinosa up, and pinch hitter Chad Tracy stepped in ending Gio Gonzalez's night. A groundout by Tracy moved Espinosa to third, but Steve Lombardozzi popped out to end the Nats' seventh. The 16-pitch inning had Halladay at 105. Still 3-2 Phillies after six and a half... Ryan Mattheus took over in the seventh and threw a quick, nine-pitch, 1-2-3 bottom of the inning.

• Harper Chirping: Antonio Bastardo threw a high 2-2 heater by Bryce Harper for the first out of the eighth after Harper had argued pretty vehemently against home plate umpire Manny Gonzalez's calls on the first few pitches. A 93 mph 1-2 four-seamer got a foul-tip strike three from Ryan Zimmerman for out no.2 and a full-count slider to Adam LaRoche ended a nine-pitch at bat with the third K of the frame. Bastardo struck out the side on 19 pitches. Still 3-2 Phillies after seven and a half. Sean Burnett hit Chase Utley in the first at bat of the Phillies' eighth and the Philly second baseman promptly stole a base with Ryan Howard at the plate, but the big first baseman struck out swinging. Utley stole third in the next at bat, and scored when John Mayberry lined out to right. 4-2 Phillies after eight.

• Dance, Pap: Phillies' closer Jonathan Papelbon threw an 0-2 fastball up high by Jayson Werth. Roger Bernadina flew to center for out no.2 and Danny Espinosa K'd swinging at an 0-2 heater to end it. Phillies win, 4-2 final. 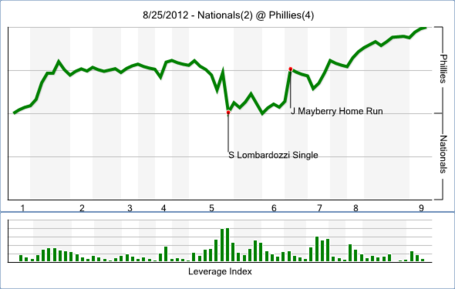