Washington Nationals Get Swept By Philadelphia Phillies, Dominated By Cliff Lee In 4-1 Loss.

Share All sharing options for: Washington Nationals Get Swept By Philadelphia Phillies, Dominated By Cliff Lee In 4-1 Loss.

• RSD vs Lee: "Right Side" Danny Espinosa entered today's game 7 for 13 with a double, three home runs, five RBIs and two Ks in his career against Philadelphia Phillies' lefty Cliff Lee. The Nats' 25-year-old SS/2B was also 18 for 66 with three doubles and four home runs in his career in Philly's Citizens Bank Park, so he was leading off against Lee in the Sunday matinee. After all that buildup Espinosa K'd swinging at an 0-2 curve for the first out of a 14-pitch scoreless first by Lee, who gave up a two-out single by Ryan Zimmerman before popping up Jayson Werth.

Jordan Zimmermann got Jimmy Rollins to chase a wicked 1-2 curve for out and K no.1 in the bottom of the frame and there was a little anger in the Nats' right-hander's eyes aimed from the mound toward home plate umpire Lance Barksdale after the ump called a 2-2 curve on the outside corner a ball in a two-out at bat against Chase Utley that ended in a walk. Zimmermann took his anger out on Ryan Howard in the next and bat, however, and got the slugger to chase an 0-2 bender into the dirt for an inning-ending K on pitch 21 of the Nationals' starter's first. Should've been a 15-pitch frame. 0-0 in Citizens Bank.

• LaRoche Crush Lefties: Adam LaRoche hit a broken-bat single to center off Cliff Lee to start the second, but a fly to right from Tyler Moore and a 5-4-3 DP off Jesus Flores' bat ended an eight-pitch inning by the Phillies' left-hander. John Mayberry lined a 93 mph fastball to left-center for a leadoff single in the Phillies' second, but Laynce Nix flew weakly to left for out no.1 on an 0-2 curve, Ryan Zimmerman smothered a sharp grounder to third by Kevin Frandsen and got a force at second, though not a double play, and Jordan Zimmermann popped Erik Kratz up with a 3-0 fastball to ended a 10-pitch bottom of the second in Philadelphia with Mayberry stranded at first. Still 0-0.

• Phing Lee: Steve Lombardozzi took an 0-2 fastball up high that was called strike three by Lance Barksdale for the first out of what ended up being a 17-pitch scoreless third by Cliff Lee, who was breaking bats and dominating the Nats through three scoreless in which he threw 39 pitches, 31 of them strikes. Lee didn't like it as much when Jordan Zimmermann got a called strike three from Barksdale with his own high heater on an 0-2 pitch to the opposing pitcher in the Phillies' third. 3 Ks in 2.1 IP. Zimmermann issued his second walk of the game to Juan Pierre in an eight-pitch at bat with two down in the bottom of the inning, but he popped Chase Utley up to right to end 17-pitch frame at 48 pitches overall. 0-0 after three in Citizens Bank Park... oh and Jayson Werth caught the ball with his bare hand after losing it in the sun and missing it with his glove:

• Lee, Lee, Lee: Cliff Lee threw an 0-2 fastball by Jayson Werth to end a nine-pitch, 1-2-3 4th at 48 pitches overall. 3 Ks in 4.0 scoreless. Zimmermannn threw a 12-pitch frame in the bottom of the inning to finish 4.0 scoreless vs the Phillies at 60 pitches total, 40 of them strikes. Tyler Moore was the first player to reach second base for either team today when he doubled to left with one down in the fifth. 7th double of the year for the Nats' 25-year-old outfielder. Lee got Jesus Flores to chase an 0-2 fastball upstairs, however, and got a groundout from Lombardozzi to end his fifth scoreless frame. 12-pitch inning by the Phillies' left-hander.

• DIY Lee: Kevin Frandsen singled to left to start the home-half of the fifth with the second hit of the game off the Nats' Jordan Zimmermann. A passed ball with Erik Kratz up put the Phillies' first runner in scoring position, but the Philly catcher flew out to short center and a diving Bryce Harper for out no. 2 of the fifth before Cliff Lee lined a 93 mph heater to center and over Harper's head in the next AB for an RBI double and a 1-0 lead. Lee's second double of 2012 was followed by Jimmy Rollins' 15th HR which sailed out to right and just over the wall on a 3-1 fastball the Phillies' shortstop crushed. 3-0 Philadelphia in the 5th. Zimmermann was up to 32 pitches when he walked Ryan Howard with two down, and 34 total when he popped John Mayberry up to end a long bottom of the inning.

• 13.0 Scoreless: Roger Bernadina reached on an infield single in a pinch hit AB that led off the sixth, and took second on a groundout by Bryce Harper to give Ryan Zimmerman a runner in scoring position with two down, but the Nats' third baseman flew out to the warning track in left-center to end Cliff Lee's 13th scoreless inning against the Nats this season. Laynce Nix gave the Phillies a 4-0 lead when he crushed a hanging-*** 0-2 slider from Tom Gorzelanny for a solo shot to start the bottom of the sixth. HR no.3 of 2012 and Nix's first since May 3rd (though he did miss time with a calf injury). 13-pitch seventh for Gorzelanny, 4-0 Phillies in CBP.

• Stupid Phence On Top Of The Phence: Jayson Werth reached on an error by Cliff Lee, who threw one by Ryan Howard at first on a swinging bunt by the Nats' slugger. Adam LaRoche crushed a first pitch fastball in the next at bat that soared over Laynce Nix and the out-of-town scoreboard for what looked like a two-run HR, but the ball bounced off the top of a metal fence atop the right field fence and bounced back into play for what (much to the surprise of Werth and LaRoche) was ruled a double based on the stadium's ground rules. Fence atop the fence is in play, apparently. LaRoche was in his HR trot and got caught in a rundown between second and third and tagged out. 8-4-2-6 put out after a "double" off the top of the fence. Werth only made it to third. Tyler Moore followed with his second double of the game off Lee to bring Werth in, but the Nats only got within three on what looked like a two-run blast. 4-1 Phillies after six and a half. Tom Gorzelanny stranded Jimmy Rollins at third in a scoreless seventh in his second inning of work in relief. Still 4-1 Phillies.

• [CHOMP!]?: Jeremy Horst took over for Cliff Lee in the top of the eighth and surrendered a leadoff double by Roger Bernadina, who lined to the left field corner and just out of reach of a diving Michael Martinez. Davey Johnson bluffed with Ian Desmond, forcing Charlie Manuel to go to the pen for a right-hander, Josh Linblom, so Davey burned the injured Desmond and went with Chad Tracy. Tracy grounded out to short, however, with the Shark still stuck at second. Ryan Zimmerman stepped in with two down and K'd swinging at an 0-2 fastball for out no.3 of the Nats' eighth. Drew Storen threw a quick, 11-pitch, 1-2-3- bottom of the eighth to keep it a three-run lead heading into the ninth. 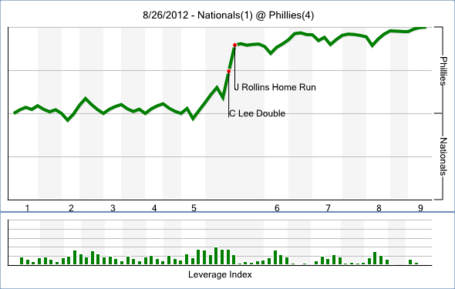