• Miami, FL: The glitz. The glamour. The cigarette boats. LeBron. Crockett. Tubbs. Ozzie. The lime green outfield walls and Red Grooms' psychedelic blue, green, bright pink, aqua and orange, cloud-filled, flamingo-and-seagull-covered, Marlin-twirling, palm tree spotted home run display. The Washington Nationals were back in Miami's Marlins Park tonight to take on Ricky Nolasco and the Fish with Stephen Strasburg on the mound for the Nats for the 26th time in 2012. The Marlins' were playing some questionable defense early in the game with Gregg Dobbs flat missing a weak grounder to third by Jayson Werth in the first AB and El Caballo Carlos Lee making an ill-advised attempt at a double play on a weak grounder to first by Bryce Harper with Werth running and almost at second before Lee decided to make a throw, but right-handed starter Ricky Nolasco retired the side on 22 pitches for a scoreless top of the first vs the visiting Nats that ended with Werth stranded at third.

• 27.0 Scoreless: Grounder. Desmond. Out. Stephen Strasburg got a groundout to short for the first out of the Marlins' first, but a 98 mph first-pitch fastball to Fish outfielder Justin Ruggiano ended up going out to center field and over the aforementioned lime green outfield wall and almost off the Marlins Park HR sculpture to give the home team an early 1-0 lead. El Caballo Carlos Lee doubled with two down to get Giancarlo Stanton up with a runner on, and Lee beat Jayson Werth's throw home, sliding in around Kurt Suzuki's tag when Stanton singled to right to make it 2-0 Marlins after an inning in Marlins Park. The Marlins' runs in the bottom of the first were first the Fish scored off Stephen Strasburg since the third inning of a September 17, 2011 game. Strasburg's streak of 27.0-straight scoreless against the Marlins ended in the first tonight...

It would not get any better...

• 1-2-3, 1-2-3: Given a 2-0 lead to work with, Ricky Nolasco retook the mound and threw a quick, nine-pitch, 1-2-3 top of the second. Strasburg threw a quick, 10-pitch, 1-2-3 bottom of the frame, striking the opposing pitcher out to end the home-half of the second. With an assist from a diving Giancarlo Stanton in right field, Nolasco completed an eight-pitch top of the third for three scoreless in which he hadn't allowed a hit. Bryan Petersen turned a 95 mph fastball inside out for an opposite field single to start Miami's third. Petersen swiped second without a throw on a 2-1 bender to Ruggiano that was called strike two. The Marlins' outfielder who homered in his first at bat worked the count full and walked when Strasburg missed inside with a 3-2 change. An aggressive throw to second by Strasburg on a grounder to the mound got a force, but there was no chance of doubling Jose Reyes up on the play. Runners on first and third for El Caballo, and Lee rolled one out to second where Danny Espinosa was thinking double play, but he forget to field the ball first and had it bounce right by him as the Marlins' third run scored. 3-0 Fish. Greg Dobbs' two-out, two-run single to center brought Reyes and Lee in (after Lee had stolen second) and the Nationals and Strasburg trailed the Fish 5-0 after 3.0 innings in Miami, FL.

• Universe Conspiring: A Bryce Harper liner to center hung up unnaturally until Justin Ruggiano could sprint over and get underneath it for out no.1 of the fourth. Two outs later, Ricky Nolasco had an 11-pitch, 1-2-3 inning in the books. No hits for the Nats through four in Miami. Strasburg started the bottom of the fourth at 56 pitches to Nolasco's 50 total through four. Fish catcher Rob Brantly lined a 2-0 Stras fastball to right for the Marlins' sixth hit off the Nationals' starter. A bunt moved Brantley into scoring position, a groundout moved him to third and a two-out single on a 2-0 pitch to Justin Ruggiano brought the catcher in to make it 6-0 Marlins in the bottom of the fourth. An 11-pitch inning had Strasburg at 67 overall down six runs to the Fish.

• There Goes The No-Hitter! [Drinks]: Michael Morse grounded out to short, Ian Desmond chased an 0-2 slider outside and Danny Espinosa K'd swinging at a pitch in the dirt that got by the Marlins' catcher Rob Brantly. Espinosa reached on a wild pitch, and went first-to-third™ on a Kurt Suzuki single before a Stephen Strasburg groundout ended the top of the 5th. Still 6-0 Fish. Giancarlo Stanton collected the eighth hit off Strasburg when he lined a 96 mph 3-1 fastball to left for his 26th double of 2012, and one out later he scored on a two-out single by Donovan Solano that gave the Marlins a 7-0 lead. The 17-pitch inning had Strasburg at 84 overall and likely done for the night after a rough, rough outing.

• HITZ!!: Bryce Harper and Ryan Zimmerman hit back-to-back one-out singles off Nolasco for the Nationals' second and third hits of the night off the Marlins' starter. Two outs later, however, both runners were stranded when the Marlins' starter completed his sixth scoreless frame. 77 pitches overall after Nolasco's 18-pitch inning. Craig Stammen took over in the bottom of the sixth, giving up a leadoff single by the opposing pitcher, Justin Ruggiano's third hit of the game with one down and a two-out, two-run single by Giancarlo Stanton that scored both Nolasco and Ruggiano to make it 9-0 Marlins after six in Miami.

• Complete Game Ricky: After Ricky Nolasco a nine-pitch scoreless seventh, Stammen came out for his second inning of work. retiring the Marlins in order in an 11-pitch bottom of the inning. Nolasco needed just seven pitches to complete a seven-pitch, 1-2-3- top of the eighth against the Nationals at 93 pitches overall after 8.0 scoreless. Craig Stammen gave up another hit by Ruggiano, but completed a scoreless bottom of the eighth after which Ricky Nolasco returned to the mound, gave up a pinch hit by Chad Tracy, hit Adam LaRoche with two down, but finished his ninth scoreless vs the Nationals down for the complete game shutout win. 9-0 final. Five-straight losses for the Nationals. Panic? Or wait until there's a bear on the loose? [ed. note - "Yes, that was a Semi-Pro reference."] No refunds. Get'em tomorrow... 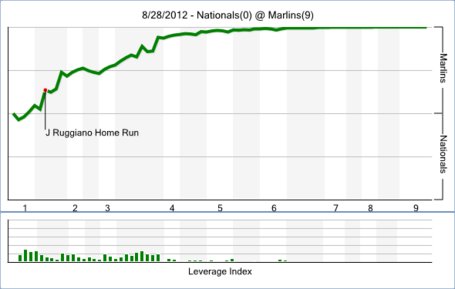