• BA Approved: 21-year-old Miami Marlins' right-hander Jacob Turner, an '09 1st Round pick taken 9th overall by Detroit, was acquired along with catcher Rob Brantly, minor league left-hander Brian Flynn and a 2013 compensation draft pick in the deal that sent Omar Infante, Anibal Sanchez and a 2013 compensation draft pick to the Tigers back on July 23rd. Before that, Turner spent three straight seasons atop Baseball America's list of the Top 10 Prospects in Detroit's organization. The righty's first start in front of what passes for a home crowd in Marlins Park these days began with an 11-pitch, 1-2-3 inning in the second game of two for the Washington Nationals in Florida. '07 Nats' 1st Round pick Ross Detwiler had a runner reach on a misplay in right-center by 2010 1st Rounder Bryce Harper, but the Nationals' left-hander threw a scoreless 15-pitch first that had it 0-0 after one in Jeffrey Loria's new ballpark.

• Ks And Grounders: Jacob Turner needed seven pitches to strike Adam LaRoche and Michael Morse out for the first two outs and third and fourth Ks in his first 1.2 IP and one more pitch to get a fly ball to deeeeep left field off Ian Desmond's bat that didn't quite make it over the wall into the Clevelander. 8-pitch second for Turner. 0-0 in Miami. Grounder. Desmond. Out. Grounder. Desmond out. Nats' shorstop Ian Desmond threw out Giancarlo Stanton and Justin Ruggiano on the third and fourth ground balls hit his way in Detwiler's first 1.2 IP. A fly to right by John Buck ended Detwiler's second scoreless after another 15 pitches. 30 total after two for the Nationals' 26-year-old lefty.

• No! No! No!: An 0-2 change to Danny Espinosa got a grounder to the mound for Jacob Turner's seventh straight out to start the game. A 1-1 two-seamer to Kurt Suzuki got the start the same result. After a third grounder to the mound off Ross Detwiler's bat, the Marlins' starter had set the first nine Nationals Turner faced down in order with his 10-pitch third leaving him at 29 pitches overall in 3.0 scoreless. Ross Detwiler struck both Marlins' 3B Donnie Murphy and the opposing pitcher out for the first two out of Miami's third. Gorkys Hernandez worked the count full, but missed a 93 mph 3-2 sinker for the third straight strikeout by Detwiler in a 17-pitch, 1-2-3 3rd.

• #everydamnday: Jayson Werth lined to left on the first pitch of the fourth for the Nationals' first hit of the night off the Marlins' starter. Bryce Harper followed quickly with the second Nats' hit, a two-run HR to right that the Nats' 19-year-old outfielder hit on a 1-1 cutter from Turner. 2-0 Nationals on Harper's 13th. Adam LaRoche singled to left field with one down as the Nats seemed to figure Turner out the second time around. Michael Morse hit a triple off the rounded center field wall in front of the home run sculpture on a 2-2 two-seamer from Turner in the next at bat and Morse's three-base hit brought LaRoche in and made it 3-0 Nationals. That Morse's first triple since August of 2010, and he scored on an RBI single by Ian Desmond in the AB that followed to make it 4-0 Nats before Turner could get through the fourth. 29 pitches for Turner through three, 28 in the fourth. Ross Detwiler struck Donovan Solano out for his fourth straight K, then retired Jose Reyes and Carlos Lee to set 11-straight Marlins down after Solano's one-out "double" in the 1st. 4-0 Nats.

• Green Light: After hitting his 13th HR of 2012 in his previous AB, Bryce Harper got the green light to crush a 3-0 pitch from Jacob Turner with one down in the 5th and he sent a monster HR into the second deck in right field for his second home run of the night and his 14th of 2012. 5-0 Nationals after four and a half after the 19-year-old's second blast of the game. Giancarlo Stanton doubled to start the Marlins' fifth with the team's first legit hit, no. 27 of 2012 for the Marlins' outfielder. Back-to-back flies to deep center and right, respectively, moved Stanton to third and brought him in to make it a 5-1 game in the fifth. John Buck with the sac fly RBI. Ross Detwiler needed 18 pitches to complete the inning with a four-run lead.

• Det's Done: Wade LeBlanc replaced Turner in the top of the sixth and surrendered a leadoff single by Adam LaRoche, that had the Nats' first baseman 2 for 3 tonight. Michael Morse stepped in next and grounded into a 4-6-3 DP. Ian Desmond walked with two down to bring "Right Side" Danny Espinosa up against the Marlins' lefty, who got a backwards K with an 0-2 cutter to end the top of the sixth after 14 pitches. Ross Detwiler gave up a leadoff walk to Bryan Petersen and a one-out single to left by Donovan Solano in the bottom of the frame, and the walk scored on Jose Reyes' RBI single to right in the at bat that followed. 5-2 Marlins with runners on first and third. Carlos Lee hit too weak a grounder to second for the Nats to turn a 4-6-3 DP, and the Marlins pulled within two when Solano scored to make it 5-3. Ryan Mattheus took over for Detwiler there and struck Ryan Mattheus out to end the bottom of the sixth.

• Go-Dan: Chad Gaudin threw an 11-pitch, 1-2-3 top of the seventh, striking Jayson Werth out to end the frame. Ryan Mattheus returned to the mound and gave up back-to-back singles by Justin Ruggiano and John Buck. A bunt by Donnie Murphy moved both runners up and a sac fly to center by Greg Dobbs made it a 5-4 Nats' lead. Gorkys Hernandez stepped in with a runner on second and two down, and lined out to short to end the seventh. Still 5-4 Nationals in Marlins Park. Mike Dunn took over for Miami in the top of the eighth, giving up a one-out opposite field double by Ryan Zimmerman, who connected for his 29th two-base hit of 2012. Zim took third on an Adam LaRoche groundout and Dunn was lifted with two down and Michael Morse due up in favor of Marlins' right-hander Ryan Webb. Morse connected for an RBI single to right and the Nationals took a two-run lead when Zim scored to make it 6-4 Nats after seven and a half.

• Burn-to-Storen-to-Clipp: Sean Burnett gave up Donovan Solano's third hit in four AB's. Ryan Zimmerman was drawn in and he failed to backhand a chopper toward third off Jose Reyes' bat. "Double" for Reyes, no. 30 of 2012 and runners on second and third with no one out. Drew Storen vs El Caballo. Line drive to center, but Bryce Harper made the catch and a strong throw home to hold the runner at third. +Arm, +Power! And Storen came through with a +slider on a 1-2 pitch that got Giancarlo Stanton swinging for out no.2 before a grounder to third but Justin Ruggiano retired the side without a run scoring. 6-4 Nats after eight. STOREN!!!!!!!!

• Ready or Not: The Nationals added a run on a Kurt Suzuki HR to left in an 8-pitch AB in the top of the ninth. 7-4, then added another when Steve Lombardozzi reached on a Jose Reyes' error, stole second and scored on an RBI single by Jayson Werth. 8-4 Nationals. Bryce Harper grounded into a double play in the top of the ninth, and slammed his helmet on the ground. When it bounced close to first base ump CB Bucknor the umpire tossed the 19-year-old outfielder much to the dismay of Davey Johnson, who had a long discussion with the ump before leaving the field. Ryan Zimmerman thought he had his second double of the year in his next at bat, but Giancarlo Stanton cut it off and threw Zim out at second.

• Clipp'd: Even with the insurance runs, Tyler Clippard came on in the ninth. John Buck grounded out to short, ONE!! Donnie Murphy popped out to second. TWO!!! Greg Dobbs flew to center to end it. Ballgame. Losing streak's history. Marlins and Nats split the two-game set. 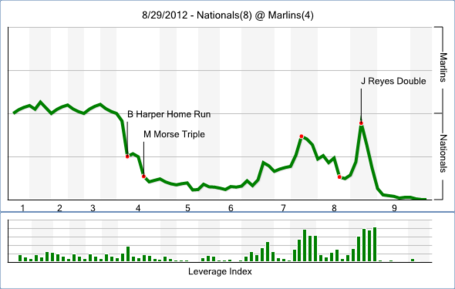