• RUN HARP!!: Edwin Jackson got Jon Jay to chase a 1-1 curve, but the St. Louis Cardinals' outfielder took a 1-2 fastball, which, unfortunately for him, was called strike three for the first out and K of tonight's game. A 1-2 slider outside caught Carlos Beltran staring for out and K no.2. Matt Holliday managed to foul off a 2-1 slider, and then connected with a 2-2 fastball that went back to the mound and off E-Jax' glove for a two-out infield single in the top of the first, but Allen Craig couldn't hold up on a 1-2 slider that fell off the outside of the plate as Jackson struck out the side in a 17-pitch opening frame. Jayson Werth worked a five-pitch walk out of Cards' starter Jaime Garcia in the bottom of the first, and Bryce Harper did it again! Line drive to right and into the home team's bullpen over the United Airlines sign on the RF wall for a two-run HR and Harper's third blast in the last two games. 2-0 Nationals on no. 15 of 2012 for the 19-year-old Nat. One HR away from tying Jr.

• Moar Kz: A full-count fastball up high got Yadier Molina swinging for Edwin Jackson's 4th K in 1.1 IP, but Jackson missed with 3-1 fastball to David Freese, who took the first walk of the game from the Nats' starter. Skip Schumaker K'd chasing a full-count slider outside for Jackson's fifth K and Rafael Furcal grounded out to second for the first out that wasn't a K in 2.0 scoreless by the Nationals' right-hander. The 20-pitch inning had E-Jax at 37 total after 2.0 IP. Jaime Garcia started the second at 25 pitches after a long first. Ian Desmond, who's clearly not 100% yet, singled to left and took his time getting to first. but luckily his teammates didn't make him run any more as the next three Nats went down in order in an eight-pitch inning by the St. Louis starter. 2-0 Nationals.

• Harp? No. 400 ft Fly Ball: Jaime Garcia chased an 0-2 into the dirt and had to be thrown out after Edwin Jackson's 6th K in 2.1 IP. Five pitches into the inning there were two outs after Jon Jay flew to center on a 1-0 curve. Carlos Beltran missed a 3-1 slider, but smoked a full-count fastball for a sharp two-out single by Adam LaRoche and into right. A wicked 2-2 slider had Matt Holliday swinging several inches above where it ended up as E-Jax collected his seventh K in 3.0 scoreless frames. A 16-pitch inning had E-Jax at 33 pitches after 3.0. Jayson Werth singled to start the Nationals' third, and Bryce Harper almost did it again, crushing a first pitch fastball that Jon Jay caught just short of the CF wall. Ryan Zimmerman beat out a one-out infield single in spite of a spectacular diving play and throw by Rafael Furcal at short and after Michael Morse walked in the next at bat the bases were loaded for Adam LaRoche, who hit a sac fly to right to give the Nats a 3-0 lead over St. Louis after 3.0.

• Grounder. Desmond. Out.: Allen Craig started the fourth with a groundout to short. Edwin Jackson issued a one-out walk to Yadier Molina, but it looked like the Nats turned a 5-4-3 DP until umpire Brian Knight ruled Espinosa had come off the second base bag way too early. [He had.] A two-out single to left by Skip Schumaker put runners on the corners for Rafael Furcal, who popped to short to end the top of the fourth after 13 pitches by the Nats' starter. Jaime Garcia needed just seven pitches to retire the Nationals in order in the bottom of the inning. After flying out to end the fourth, E-Jax got Garcia to ground out for the first out of the fifth. Jon Jay tried to check his swing on a full-count slider in the dirt, but he didn't and Jackson had his 8th K in 4.2 IP and one pitch and groundout to first later, had a 13-pitch, 1-2-3 5th. Still 3-0 Nationals. 79 pitches overall for E-Jax.

• AROOOOOOOO!!!: Jayson Werth started the Nats' fifth with his first home run since returning from the DL and his first since May 5th against Philadelphia. Werth took a 1-2 fastball from Garcia to left and off the 106.7 the FAN in DC sign in the back of the visitor's bullpen. HR no. 4 of 2012, 4-0 Nationals over the Cardinals in the fifth. 377 ft to the wall, add ten or fifteen. A blast by Werth. Michael Morse hit a two-out single off Garcia, but he was stranded at first when Adam LaRoche K'd swinging to end the Nats' fifth.

• 9 Ks For E-Jax: Edwin Jackson got Matt Holliday swinging for his 9th K in 5.1 IP. Back-to-back groundouts by Allen Craig and Yadier Molina ended a quick seven-pitch 1-2-3 inning for the Nats' right-hander. 6.0 scoreless on 86 pitches. Ian Desmond, Danny Espinosa and Jesus Flores hit back-to-back-to-back singles to start the bottom of the inning with the bases loaded and no one out for Edwin Jackson. Rafael Furcal took the force at home on a grounder that first went back to the mound and off Jaime Garcia. One down. Furcal hurt his elbow on the play. That was it for the Cards' starter too. Right-hander Fernando Salas took over with Jayson Werth up. A run scored when Werth grounded into a force at second, 5-0, and Bryce Harper hit an RBI single over short into center in the next AB for a 6-0 lead after 6.0 in D.C.

• 7.0 Scoreless, 8 Runs: A groundout to second by David Freese started Edwin Jackson's seventh inning of work. Grounder. Desmond. Out. Skip Schumacker sent one out to short on which Ian Desmond made a spinning play and throw and Bryce Harper made a running catch in center on a Daniel Descalso fly ball that ended E-Jax' seventh scoreless frame after 19 pitches with the right-hander at 105 pitches overall. Michael Morse singled to center off Cards' right-hander Lance Lynn to start the bottom of the inning with Washington's 11th hit. Adam LaRoche walked in the next at bat to bring Ian Desmond up with two on and no one out. Desmond K'd swinging. Danny Espinosa walked with one down and Jesus Flores hit a two-run single through short to make it 8-0 Nats after seven innings.

• Overhand Throws Not Zim's Thing: E-Jax came back out for the eighth, and gave up a leadoff double on the first pitch he threw to pinch hitter Bryan Anderson. Ryan Zimmerman fielded a grounder to third by Jon Jay, but sailed the overhand throw to first to allow the Cardinals' first run of the game to score. 8-1 Nats and the Cards score for the first time in 28.0 innings. E-Jax got Carlos Beltran swinging for his 10th K of the game, and a ground and flyout later the right-hander was through 8.0 with just one unearned run allowed. 8-1 Washington. Michael Morse singled with one down in the Nats' eighth, but Adam LaRoche grounded into an inning-ending 3-6-1 DP. 8-1 after eight. 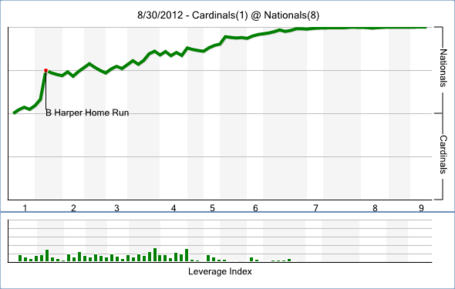