Washington Nationals' lefty Gio Gonzalez's threw a complete game and his strong start against the St. Louis Cardinals guided the Nats to a 10-0 win.

• Best-Dressed Pitcher In Town: Before the start of each game, Gio Gonzalez draws a large cross or large lower case "t" in the dirt on the front of the mound sloping toward home. His right [plant] foot lands directly on the base of the cross with every pitch he delivers toward home. The 26-year-old left-hander's foot landed in the same spot 13 times in the first, as he repeated his delivery and induced three ground ball outs from the St. Louis Cardinals in the opening frame of game two of four between the two teams in the nation's capital. Jayson Werth walked again in his first at bat of the game in the bottom of the inning, just as he did last night, then moved up 90 ft when Bryce Harper lined a 1-2 curve to right for a single off Cards' right-hander Adam Wainwright. A swinging bunt by Ryan Zimmerman moved both runners into scoring position for Adam LaRoche, and the Nats' first baseman's soft liner to left field drove both runners in for a 2-0 Nats' lead after one D.C.

• 6 Up And Down: A filthy 1-2 bender got Gio Gonzalez his fourth-straight out to start the game and his first strikeout of the evening in the top of the second. Bryce Harper caught the fifth out to start the game in front of the out-of-town scoreboard in right-center and Ryan Zimmerman did his thing on a weak grounder to third by David Freese, charging, fielding and making a sidearm snap throw to first to beat his counterpart to the bag for the sixth-straight out from the sixth Cardinal to step in against Gio Gonzalez. Jayson Werth seemed to think he'd connected for a two-out opposite field home run in the bottom of the second, but it bounced off the curly-W-covered wall in right field and Werth had to hustle around to second to avoid getting thrown out by Carlos Beltran. Werth's 14th double of 2012, but he was stranded when Harper flew out to left to end a 15-pitch second by the Cardinals' right-handed starter.

• 7-8-9: Adam LaRoche made a ridiculous play to pick a low throw to first by Gio Gonzalez, who fielded a swinging bunt by Skip Schumaker and fired a one-hopper to the bag. 7 up and down and make it 8 as the Nats' lefty got Cards' shortstop Pete Kozma swinging for out no. 2 of the third and K no. 2 on the night and a 1-2 fastball got a called strike three on the opposing pitcher as the Nationals' starter set the Cards down in order the first time through the lineup. Ryan Zimmerman smoked a 1-2 sinker, lining a double to right to lead off the Nationals' half of the third. Double no. 30 of 2012 for the Nats' third baseman. Adam LaRoche walked on four pitches in the next at bat. Zim took third on a fly to right by Michael Morse then scored when Ian Desmond singled through short. 3-0 Nats in the third.

A wild pitch by Wainwright moved both LaRoche and Desmond into scoring position for Danny Espinosa, whose line drive single to center brought LaRoche in to make it 4-0 Nationals. And then 5-0 when Kurt Suzuki singled to left to score Desmond. Jayson Werth went the other way for an RBI single that drove Espinosa in, 6-0, on the fourth hit of the inning off Adam Wainwright. Harper walked in a nine-pitch, two-out AB that pushed Wainwright up to 44 pitches in the third, 86 overall and ended his night, but Ryan Zimmerman just missed a grand slam on the first pitch from reliever Trevor Rosenthal, who got the Cards out of the third trailing by just six instead of 10.

• Not Perfect: Jon Jay walked to start the fourth and end Gio Gonzalez's bid for a perfect game. A 10-pitch walk to Carlos Beltran followed in the next at bat, putting two on in front of Matt Holliday, but preserving the Nats' lefty's no-hit bid. Gio got a grounder back to the mound from Holliday that started a 1-6-3 DP, and Allen Craig flew to right to end the Nats' lefty's third scoreless after 22 pitches. 61 overall in 4.0 scoreless IP.Trevor Rosenthal needed 16 pitches to complete a 1-2-3 bottom of the fourth, nine of them to Ian Desmond, who battled the Cards' right-hander before striking out. Still 6-0 Nats. Yadier Molina started the fifth with a double to left that was the Cards' first hit of the game off Gio Gonzalez. David Freese K'd swinging at a 1-2 curve, but Skip Schumaker's groundout moved Molina to third where he was stranded when Pete Kozma grounded out to second to end the fifth and 5.0 scoreless for Gio.

• Small Axe: Kurt Suzuki walked with one down in the Nats' fifth and took second on a passed ball and Jayson Werth walked with two down to bring Bryce Harper up with runners on. Lefty Mike Rzepczynski took over on the mound and gave up a two-out, two-run single to center on a two-strike slider as Harper brought both runners in to make it 8-0 Nationals. Werth 2 for 2 w/ 2 walks. Harper 2 for 3. Nationals 8-0.

• 14 Pitches = 6 Outs: Daniel Descalso singled to center for St. Louis' second hit off Gio Gonzalez in the top of the sixth and Jon Jay singled to left for the third in the next at bat to send Descalso around to third, but a fly to right by Carlos Beltran and a 5-4-3 DP off Matt Holliday's bat ended Gio's sixth scoreless after just five pitches. Mike Rzepczynski threw a 13-pitch, 1-2-3 bottom of the sixth, striking Ian Desmond out to end the bottom of the inning. Allen Craig singled to right to start the seventh, but Yadier Molina K'd swinging and David Freese grounded into and inning-ending 4-3 DP. 7.0 scoreless for Gio Gonzalez after a nine-pitch frame.

• Complete Or Eight?: Mitchell Boggs retired the Nationals in order in the top of the eighth. Michael Morse caught a line drive to left off Skip Schumaker's bat for the first out off the eighth inning. Skip Schumaker flew to left, Tony Cruz K'd swinging (no.6) and Daniel Descalso K'd looking at the 9th pitch of his two-out AB. 7 K's in 8.0 scoreless by Nats' lefty Gio Gonzalez, who was up to 100 pitches even after the 15-pitch frame. Jayson Werth was 3 for 3 with 2 walks after an infield single off Jason Motte in the bottom started the bottom of the eighth. Motte threw a 99 mph heater by Bryce Harper for the first out of the inning, but Ryan Zimmerman connected with a full-count cutter and sent an opposite field homer to right and into the Nationals' bullpen. Two-run blast, 10-0 Nats on Ryan Zimmerma-- THE KIDS CALL HIM ZIM!! THE KIDS CALL HIM ZIM!! No. 17 of 2012.

• CGSO: Gio Gonzalez came back out for the ninth to a standing ovation from the D.C. Faithful and gave up a leadoff single by Jon Jay that bounced off and got by Ian Desmond. Carlos Beltran K'd swinging at a 1-2 curve for out no.1 and K no.8. ONE!!! Gio missed with a full count fastball to Matt Holliday. One-out walk. 112 pitches overall. Allen Craig flew to left for out no.2. TWO!!!! Shane Robinson stepped in with two down and got up 3-0 as Gio struggled to throw strikes, but he got the 3-0 pitch in for a strike and popped Craig up to end it. Complete game shutout. Win no. 17 of 2012. Ballgame. 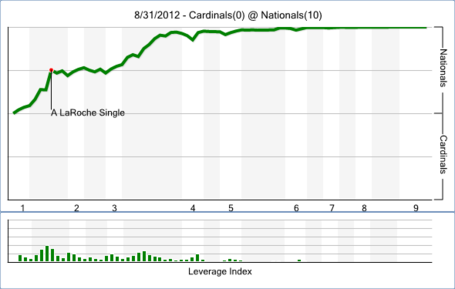