• Quick Workers: Steve Lombardozzi backhanded a one-hopper toward the second base bag, pivoted and threw off his back foot to Adam LaRoche at first just in time to get Marlins' shortstop Jose Reyes for out no.3 of the top of the first. Washington Nationals' right-hander Jordan Zimmermann needed just 10 pitches to get through the opening frame of his 22nd start of 2012. Miami lefty Mark Buerhle threw an eight-pitch 1-2-3 bottom of the first with help from Fish third baseman Greg Dobbs, who snagged a hard-hit liner off Ryan Zimmerman's bat for the final out of the inning.

The Marlins got their first runner of the night when Carlos Lee took a 1-1 fastball from Zimmermann on the hip, and they got their second when the Nats' starter walked Donovan Solano one out later. Just when it looked like another strong defensive play would get one of tonight's starter's out of a jam, however, Nats' shortstop Danny Espinosa sailed a throw to first on what should have been an inning-ending 4-6-3 DP on a grounder to second by Gorkys Hernandez. Carlos Lee scored on the play, then Hernandez scored from second when Marlins' catcher John Buck went the other way with a 2-2 slider from Zimmermann for an RBI double to right that sailed over Bryce Harper's head. 2-0 Marlins after one and a half in Nats Park...

• PIck It up!! It = Option: Adam LaRoche entered tonight's game with a .284/.339/.529 line in 57 games and 115 plate appearances against left-handed pitchers in 2012 with four of his 23 doubles and seven of 21 HR's hit off left-handers. LaRoche was 4 for 10 with two doubles off Mark Buehrle in his career before tonight, and he was coming off an 0 for 4 game in the second game of last night's doubleheader after he'd gone 3 for 4 with a double and a HR in the first game of two the Nationals played with the Marlins. The 0 for 4 in the nightcap brought the end of an eleven-game hit streak. In his first at bat tonight, LaRoche hit his 22nd HR of the year, his eighth off a lefty in 2012 and the second of his career off Buehrle out to right field and over the out-of-town scoreboard to get the Nationals in the game behind 2-1 to the Fish after two.

Adam LaRoche's home run off Mark Buehrle was his career-high 8th off a left-handed pitcher this year. His previous high was 7 in 2006.

• 23 G? Who Needs Hanley?: Jose Reyes hit a double to left-center to extend his own hit-streak to 23 games, then scored from second on a sliced blooper to right by Carlos Lee that fell in the outfield grass before Bryce Harper could get to it. 3-1 Marlins. Steve Lombardozzi misplayed a hard-hit grounder by Greg Dobbs to put runners on the corners with two down before Jordan Zimmermann threw a 95 mph 2-2 four-seamer by Donovan Solano to end a 20-pitch 3rd at 53 pitches overall. 3-1 Fish.

• Zim(n) + Zim: Jordan Zimmermann walked with one down and after a single by Danny Espinosa and a force at second on a Bryce Harper grounder the Nats' pitcher was standing at third when Ryan Zimmerman lined an 0-1 change from Buehrle to center for an RBI single that made it 3-2 Marlins. Bryce Harper scored from second to tie it when Michael Morse lined to left-center on another 0-1 change from Buehrle, and it was tied at 3-3 after 3.0 when the Marlins' lefty completed a 29-pitch third. Morse's hit gave him at least one in 13-straight games.

Michael Morse's RBI-single in the 3rd inning extended his hitting streak to a career-high 13 games. #Nationals

• E:6 or E:3? A ground ball back to the mound by the Marlins' starter Mark Buehrle ended a 16-pitch, 1-2-3 top of the fourth by Jordan Zimmermann, who was at 69 pitches total after 4.0 IP in D.C. Jordan Zimmermann flew out to right two outs after Jayson Werth opened the bottom of the frame with a single to end a 15-pitch fourth inning by Buehrle.

Zimmermann broke Bryan Petersen's bat with a 95 mph 2-2 fastball inside, but the bloop that resulted fell in short right for a single to start the fifth. Petersen took second on a sac bunt by Scott Cousins, and scored on a Jose Reyes grounder to short when Danny Espinosa threw high to first and off the tip of LaRoche's outstretched glove. Petersen scores, 4-3 Fish. Second E:6 tonight.

Reyes stole second on Zimmermann/Kurt Suzuki with El Caballo Carlos Lee at the plate and then scored on Lee's RBI double to center field. 5-3 Marlins' on Lee's 18th two-base hit of 2012. 96 pitches for Zimmermann at the end of the Marlins' fifth. Mark Buehrle walked Ryan Zimmerman with two down, but got a groundout from Michael Morse to end an 11-pitch fifth of his own after which Tom Gorzelanny replaced Jordan Zimmermann on the mound.

• Gorzelanny On: Tom Gorzelanny walked Gorkys Hernandez to start the sixth, but Ryan Zimmerman started a 5-4-3 on a hard-hit grounder to third by John Buck for the first two outs of the inning. Mark Buehrle lined to left on a full-count fastball, just over the outstretched glove of a leaping Danny Espinosa. Bryan Petersen lined to right for the second two-out single off Gorzelanny, who finally ended the inning when he got Scott Cousins to ground into a force at second. 21 pitch inning for Gorzelanny. Still 5-3 Fish.

• LaGain?: Adam LaRoche was 1 for 2 with a HR tonight when he stepped in to lead off the sixth and crushed an 86 mph 0-1 fastball, sending a towering shot out to right and over the out-of-town scoreboard again for his 23rd HR of 2012 and his second HR of the night off Buehrle. Jayson Werth was 2 for 3 too when he singled in the next at bat. A sac bunt by Kurt Suzuki moved Werth into scoring position, but he was stranded there two outs later when Mark DeRosa K'd swinging in a pinch hit appearance. One-run game. 5-4 Marlins. A 16-pitch inning had Buehrle at 88 pitches after 6.0 IP.

• Insurance run?: Michael Gonzalez walked Jose Reyes in a seven-pitch at bat in the top of the seventh. Reyes promptly stole second when Gonzalez tripped throwing a pitch to Carlos Lee. Reyes' second stolen base tonight and his 27th this season. Lee grounded to first for out no.1, but an error by Steve Lombardozzi on a grounder to second by Greg Dobbs put runners on the corners with one out. Ryan Mattheus came on for Gonzalez, and the first Marlin he faced, Donovan Solano, bunted toward first to bring Reyes in and make it 6-4 Marlins. Two-run Miami lead after six and a half.

• "Right Side" And Harp Go BOOM!!: Adam LaRoche got on when Marlins' lefty Mike Dunn dropped a toss at the bag while covering first on a one-out grounder to Carlos Lee. One on, one out for Werth in the eighth. The Nats' center fielder walked to put two on for Kurt Suzuki, but the Nationals' catcher K'd swinging at a fastball upstairs for out no. 2. Steve Lombardozzi got hold of a 96 mph heater, however, and singled to center to bring LaRoche around just ahead of a throw in from Gorkys Hernandez. 6-5 game in D.C. Tyler Moore... lined to right on a 95 mph 1-2 heater to bring Werth in and make it 6-6 in the 8th... and DANNY ESPINOSA MADE IT 9-6 NATS WITH A THREE-RUN HR TO LEFT! Espinosa goes yard. "Right Side" Danny Does It! And he takes a curtain call for the D.C. Faithful, who are going berserk. And Bryce Harper goes yard too! Crushed! Harper hits a hanging curve to right field and into the second deck above the bullpen! HR no.10 of 2012. 10-6 Nationals.

• FINISH THEM!!: Tyler Clippard battled Jose Reyes for eight pitches before the Marlins' shortstop reached safely on a grounder to second Lombardozzi somehow got to but threw away. Runner on. Carlos Lee popped out to Lombo in short right. ONE!! Greg Dobbs popped to short left for out number TWO!!!! And Donovan Solano... single to left to bring Reyes in. 10-7. But a Gorkys Hernandez grounder to third allowed Zim to do his thing. Ballgame as Zim charges, fields and throws. Nats win. 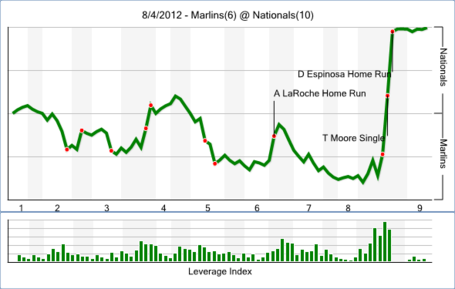