Washington Nationals 4-1 Over Miami Marlins. Stephen Strasburg With Six Scoreless vs The Fish In Win.

Share All sharing options for: Washington Nationals 4-1 Over Miami Marlins. Stephen Strasburg With Six Scoreless vs The Fish In Win.

• Strasburg pwns Fish: 24-year-old Washington Nationals' right-hander Stephen Strasburg took the mound against the Miami Marlins this afternoon looking to bounce back from a four-inning, eight-hit, six-run outing in an 8-0 loss to the Philadelphia Phillies last time out. In two starts against the Nats' NL East rivals from Miami so far this season, Strasburg was (1-0) with two walks and 13 K's in 12.0 scoreless innings before today's outing. After a 16-pitch scoreless first vs the Marlins today, the Nats' no.1 starter had 13.0 scoreless vs the Fish in 2012 and one strikeout, from El Caballo, Carlos Lee, who went down chasing an 88 mph 1-2 change on pitch no.16 from the Nats' starter.

Marlins' right-hander Ricky Nolasco needed 24 pitches to retire the Nationals in the bottom of the first, giving up a two-out infield single by Ryan Zimmerman and a walk to Adam LaRoche before he got Michael Morse to chase an 0-2 slider for a swinging K and out no.3.

• DIY: A 15-pitch, 1-2-3 second (and Strasburg's 14th scoreless inning vs Miami this year) ended with the Nationals' 19-year-old center fielder, Bryce Harper, diving forward to make a catch on a sinking liner off Marlins' outfielder Donovan Solano's bat. 2.0 scoreless on 31 pitches, 2 K's for Strasburg. Jayson Werth hit a leadoff single through the left side on a 1-2 four-seamer from Nolasco in the bottom of the second. Nolasco hit Danny Espinosa to put two on with no outs. Both runners tagged and advanced on a Jesus Flores fly to center and both runners scored when Stephen Strasburg lined a DIY single to right-center for a two-run single and a 2-0 lead. DIY Stras, who's 12 for 34 (.353/.421/.558) on the year. A walk to Steve Lombardozzi and single by Bryce Harper loaded the bases with one down, but Ryan Zimmerman lined out to Jose Reyes at short for out no 2. Adam LaRoche came up with two out and lined an 0-1 fastball to center to bring two more in. 4-0 Nationals after two innings in Nats Park...

• 16.0 Scoreless: An 88 mph 2-2 curve got John Buck swinging. A cruel 1-2 curve got Ricky Nolasco looking for Strasburg's 4th K in 3.2 IP and a groundout to second by Bryan Petersen ended an 11-pitch, 1-2-3 inning. 3.0 scoreless for the Nats' right-hander. 15.0 scoreless vs the Marlins this season. Ricky Nolasco bounced back from a 28-pitch four-run second with a four-pitch, 1-2-3 3rd. Scott Cousins grounded out to second for the first out of the fourth, the ninth-straight batter set down by Strasburg, but Jose Reyes singled to center to break that streak with the Marlins' second hit, extending his own personal hit streak to 24-straight with the one-out base knock. Ryan Zimmerman fielded a high chopper from Carlos Lee and threw overhand to first for out no.2 and a groundout to second by Greg Dobbs ended the fourth scoreless inning for Strasburg. 16.0 scoreless vs Miami this season.

• Temper, Temper: Ricky Nolasco gave up a one-out single by Steve Lombardozzi but struck both Bryce Harper and Ryan Zimmerman out to end a 12-pitch 4th. Harper drew some "oohs" from the crowd when he slammed his bat on home plate and broke it in half. Zimmerman took his helmet off and calmly placed his gloves in it after his strikeout ended the frame. Still 4-0 Nationals after four in Nats Park.

• Stras. Burg.: A 97 mph 2-2 heater got Justin Ruggiano swinging for Stephen Strasburg's 5th K in 4.1 IP. Donovan Solano took a four-pitch walk for the first free pass from the Nats' right-hander today. After starting the next at bat down 2-0 to John Buck, Strasburg got a visit from Steve McCatty. Two 95 mph fastballs for strikes followed and a 79 mph 2-2 curve got the Marlins' backstop swinging for out no.2 and K no.6 before a diving play and throw by Danny Espinosa on a grounder up the middle by the Marlins' starter brought an end to a 20-pitch 5th by Strasburg. 17.0 scoreless vs MIA this year. 69 pitches total through 5.0 IP. Nats' LF Michael Morse lined an 0-1 bender from Ricky Nolasco to center for a one-out single and hits in 14-straight games. Danny Espinosa walked with two down, but the Marlins' Ricky Nolasco got a lineout to second from Jesus Flores to end the bottom of the fifth. Still 4-0 Nationals.

• 18.0 In 2012, 27.0 Overall: An 80 mph 2-2 curve got a sharp grounder to third that Ryan Zimmerman handled expertly. Scott Cousins singled to center on a 1-1 fastball for the Marlins' third hit of the game off the Nats' right-hander, but a 4-3 DP on a grounder to Lombardozzi by Jose Reyes ended a 12-pitch 6th and Strasburg's 18th scoreless inning against the Marlins this year. 27th scoreless vs Miami overall:

• Stammenator: Ricky Nolasco gave up a one-out walk to Steve Lombardozzi (who was caught stealing) and a two-out single by Bryce Harper, who was stranded at the end of a 16-pitch inning by the Marlins' right-hander, who was at 101 pitches overall and down 4-0 after six. Craig Stammen took over for Stephen Strasburg in the seventh and three pitches into the inning the Nats' reliever had given up back-to-back doubles by Carlos Lee and Scott Cousins and the Nationals' four-run lead. 4-1 in Nationals over the Marlins in the seventh. Stammen popped up Justin Ruggiano and got help from a barehand play by Ryan Zimmerman on Donovan Solano's swinging bunt toward third before he struck John Buck out to end the inning. Still 4-1 Nationals. Adam LaRoche (2 for 3, BB) singled to start the Nationals seventh vs RHP Chad Gaudin, but Michael Morse erased the baserunner with a DP grounder to short on which Jose Reyes started a 6-4-3. 2 outs and Jayson Werth's swinging K makes three.

• Set-Up: Sean Burnett took over for the Nationals in the top of eight hand threw a six-pitch, 1-2-3 inning against the Marlins. Miami reliever Steve Cisek gave up a one-out, line drive single by Jesus Flores and a two-out HBP on Lombardozzi to put two on with two out for Bryce Harper. A base-loading walk by Harper brought Ryan Zimmerman up with the bases loaded, but the Nats' third baseman grounded to his counterpart at third to end the Nats' eighth.

• Storen Warning!!: Nats' right-hander Drew Storen took over in the top of the ninth, looking for his first save of 2012. Jose Reyes K'd swinging on a wipeout slider inside. ONE!!! Carlos Lee grounded to third. Zim. Can. Pick it. TWO!! Greg Dobbs... lines a 2-2 slider to right for a two-out single. Justin Ruggiano grounds out to second. Ballgame. Save no.1 for Storen. Win no. 65 for the Nats. 3 of 4 from the Fish. 4-1 final. 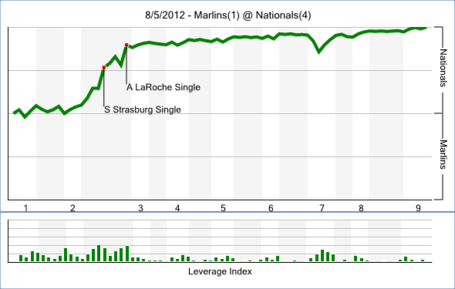