• Meet the Astros: 24-year-old Astros' '09 7th Round pick Dallas Keuchel gave up a broken-bat single on an 87 mph 3-1 two-seamer to Nationals' shortstop Danny Espinosa on the fifth pitch of the first AB of the first of four games that Washington is scheduled to play in Houston's Minute Maid Park this week. The Astros' left-handed starter got Bryce Harper looking with a 2-2 fastball low and away that the Nats' 19-year-old outfielder thought was outside. Home plate ump Chris Conroy disagreed. Ryan Zimmerman stepped in next, and the defense behind Houston's starter was perfectly aligned to receive Zim's groundout to short where Marwin Gonzalez started an inning-ending 6-3 DP by stepping on the second base bag and throwing to first. 15-pitch inning for Keuchel.

Marwin Gonzalez's slick 6-3 DP ended the top of the inning, then, after Edwin Jackson got Jose Altuve swinging for out no.1 of the Astros' first, Houston's 23-year-old Venezuelan-born, left-handed hitting shortstop got hold of a 93 mph 3-1 fastball and sent it out to right and into the second deck for a solo blast and a 1-0 Astros' lead. 3 K's the first by E-Jax, but he and the Nats trailed by a run...

• Suzuki's 1st: Jayson Werth and Kurt Suzuki (1st hit as a Nat) hit back-to-back one-out singles off Dallas Keuchel in the top of the second, before the Houston Astros' starter got Steve Lombardozzi to ground out and end a scoreless 17-pitch frame. Edwin Jackson needed just 11 pitches to retire the Astros in order in the bottom of the inning, leaving the Nats' right-hander at 32 pitches overall after two. Jackson, Espinosa and Harper went down in order in a 10-pitch 3rd by the Astros' lefty and E-Jax was quickly back on the hill in Minute Maid Park, striking the opposing pitcher and Jose Altuve out for K's no. 4 and 5 in 3.2 IP. Marwin Gonzalez took the first free pass from E-Jax with two outs, and stole second with Brett Wallace up, but a 2-2 slider got Houston's first baseman swinging to end a 21-pitch inning by Edwin Jackson. 6 K's in 3.0 IP. 1-0 Houston.

• Back-to-Back-to-Back: Ryan Zimmerman rolled a weak grounder to third and beat Astros' third baseman Scott Moore's throw to first for a leadoff infield single in the fourth. A line drive to center by Michael Morse extended the Nats' outfielder's hit streak to 15 games and brought Adam LaRoche up with no one out and two on and the red-hot-hitting first baseman singled through the right side of the infield to bring Zimmerman around. 1-1 game after three and a half in Houston. Edwin Jackson needed 24 pitches to do it, but he retired the Astros in order in the bottom of the inning to keep it tied at 1-1. 77 pitches, 7 K's in 4.0 IP for E-Jax.

• E:5: Brett Wallace dropped a pop behind first off Edwin Jackson's bat, and the Nats' starter lined the next pitch he saw to left and off the out-of-town scoreboard to lead off the 5th. Danny Espinosa followed with a chopper toward third that cleared Astros' third baseman Scott Moore and bounced into left. Bryce Harper walked to load the bases for Ryan Zimmerman, who entered the game with a .268/.322/.479 line with the bases loaded in his career and collected his 20th hit in 91 such opportunities when he bounced the second high chopper of the inning over Houston's third baseman to bring two runs in, 3-1, before he was thrown out trying to take second. One out. An RBI line drive by Morse brought Harper in from third and it was 4-1 Nats after four and a half. A 17-pitch bottom of the inning had Edwin Jackson at 94 overall after 5.0 IP. 8 K's. Seven in a row retired. 14 of 15 set down after Brett Wallace's one-out single in the first.

• 'Stros' Surge: The only runner to reach base against E-Jax after the first was Marwin Gonzalez, who homered the first time up and took a free pass in his second AB in the 3rd. Jackson's streak of seven-straight batters set down ended when he issued the second walk of the game to Jose Altuve in the sixth. The four-pitch walk put the Nationals in stall-mode as they waited for the bullpen to warm with Jackson up to 98 pitches overall. Altuve stole his 21st base of the year with Marwin Gonzalez at the plate, took third when the Astros' SS grounded out and E-Jax was done. Tom Gorzelanny took over and got a fly to left out of Brett Wallace for out no.2, but Altuve scored from third to make it 4-2 Nats and officially end Jackson's night...

• 4-3: Still in the sixth, former Nats' outfielder Justin Maxwell tripled on a high fly to center that Bryce Harper couldn't track down. A single by pinch hitter Steve Pearce brought Maxwell in from third to make it 4-3 Nationals before Gorzelanny retired J.D. Martinez to end the sixth.

• 400ft Out: Astros' lefty Xavier Cedeno retired the first two Nats in the seventh. Right-hander Mickey Storey came on with Ryan Zimmerman due up and gave up a two-out walk to the Nationals' third baseman before striking Michael Morse out to end the top of the frame. Nats' right-hander Ryan Mattheus threw a quick, 11-pitch, 1-2-3 bottom of the seventh to preserve the Nationals' one-run lead. 4-3 D.C. after seven. Justin Maxwell caught a 400ft+ fly ball to center off Adam LaRoche's bat for out no.1 in the 8th and Astros' right-hander Fernando Rodriguez struck Jayson Werth out and popped Kurt Suzuki up to end the top of the inning with the score still 4-3.

• Burnett+Storen = Hold?: Sean Burnett gave up a leadoff single by Jose Altuve on the first pitch he threw in the bottom of the eighth. Altuve was forced out at second, however, when Danny Espinosa showed off his range and made a nice play on a grounder by Marwin Gonzalez. The Astros' SS took second on a wild pitch from Burnett, and third on a fly to center by Brett Wallace. Drew Storen replaced Burnett with Justin Maxwell up. J-Max actually held up when Storen kept throwing him sliders outside and Houston's center fielder walked with two down. Steve Pearce took the second-straight walk to load the bases with two down. J.D. Martinez started up 3-0 as Storen struggled to throw strikes, but flew out to center on a 3-1 pitch. 4-3 Nats after eight.

• Ready Or... Apparently Not: Astros' lefty Wesley Wright hit Tyler Moore, but completed a scoreless top of the ninth. Nats' closer Tyler Clippard had the night off on Sunday, but he was back on the mound in the ninth tonight looking for his 23rd save of 2012. Matt Downs K'd swinging over a diving change from Clipp. ONE!! Clippard hit Astros' catcher Carlos Corporan and walked Brian Bogusevic to put two runners on with one out. Jose Altuve lined to left and off the base of the scoreboard to bring in the tying run. 4-4 game. Second and third with one out. Marwin Gonzalez K'd looking at a fastball inside for out no.2. Brett Wallace K'd swinging to end the ninth. 4-4 tie.

• FREE BASEBALL!!: Ryan Zimmerman, Michael Morse and Adam LaRoche went down in order vs Astros' right-hander Wilton Lopez in the top of the 10th. The Astros, who entered tonight's game 0-9 in extra inning games. Craig Stammen got a line drive to short from Justin Maxwell for out no.1. Steve Pearce popped up to left for no.2 and J.D. Martinez popped up to the catcher to end the 10th. Wilton Lopez came back out for the 11th Roger Bernadina singled through the right side to start the inning. Kurt Suzuki bunted one back toward the mound and the Astros' pitcher and first baseman collided trying to field it. First baseman Steve Pearce picked the ball up and threw it by first allowing Bernadina to come around, ignoring third base coach Bo Porter's "STOP!" sign, and score as the throw home sailed too. Phew! 5-4 Nationals. Suzuki made it around to third with no outs, but two outs later he was still standing there when Danny Espinosa K'd swinging to end the inning.

• Take Two: Craig Stammen came back for a second inning of work and got a fly to center from Matt Downs for out no.1 [CHOMP!] Catcher Chris Snyder battled for 10 pitches, coming close to hitting one out before striking out swinging for out no.2. Brian Bogusevic worked the count full and... walked with two down. With Jose Altuve up, Bogusevic stole second, but he was stranded when the Astros' infielder grounded out to short. Ballgame. 5-4 final. Much more difficult than it needed to be. 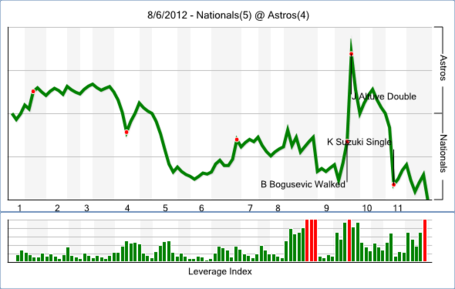