• When A Sac Fly Does Not = An Out: Armando Galararraga walked Steve Lombardozzi and Bryce Harper in front of Ryan Zimmerman in the top of the first, but Lombardozzi was thrown out trying to score on a sharp grounder to third by the Nats' third baseman that glanced off Astros' third baseman Matt Downs' glove but didn't get far enough away from the infielder to warrant the risk taken by Lombo, whose third base coach appeared to tell him to stop. Harper alertly took third on the play at the plate that got Lombardozzi and then scored to make it 1-0 in the next at bat when Adam LaRoche's sac fly to center field brought the Nats' rookie outfielder in. 1-0 Washington. A balk was called on the pitch, however, when Angel Hernandez ruled Galarraga hadn't come to a stop or had "quick-pitched" LaRoche, so Zimmerman took second and LaRoche remained at the plate but eventually K'd swinging and once Michael Morse had K'd too, Galarraga had limited the damage in a 27-pitch inning that started with two walks. Just 1-0 Nationals.

• How Many Altuves?: Jose Altuve doubled for the 27th time this year on a 94 mph 1-0 four-seamer from Gio Gonzalez in the Astros' first, then took third one out later on a single to left by Houston first baseman Steve Pearce. A single to center by Justin Maxwell brought Altuve in to tie it at 1-1. Gonzalez got a double play grounder from J.D. Martinez in the next at bat, but the Nats couldn't turn it when J-Max went in hard at second and LaRoche bobbled Lombardozzi bounced throw to first. Runners on the corners, but Gio got a force at second on a Carlos Corporan grounder to end an 11-pitch inning. 1-1 after one.

• Gio's 1st, Get that ball!!: Galarraga's second inning was going better when he retired the first two batters on eight pitches, but the ninth pitch struck Kurt Suzuki in the backside and the tenth pitch was launched to left by the opposing pitcher as Gio Gonzalez connected for his first MLB HR in his 57th MLB PA. 3-1 Nationals after one and a half. After an eight-pitch 1-2-3 second by the Nats' lefty, the Nationals threatened Galarraga again with Michael Morse singling (17-game hit streak), Jayson Werth doubling (no.6) and Danny Espinosa walking (walk no. 32?) to load the bases for Kurt Suzuki, who K'd swinging at a 1-2 slider to leave them loaded. Still 3-1 Nats. Galarraga was up to 64 pitches after 3.0 IP, Gio started third at 19. The Nats' lefty gave up a one-out single by Matt Downs, but got a double play grounder out of Steve Pearce to end a 9-pitch inning. Espinosa to Lombardozzi to LaRoche, 6-4-3.

• It's Me, Angel!: Bryce Harper K'd looking at a 1-2 sinker [that appeared waaaaay] outside from Armando Galarraga that home plate umpire Angel Hernandez called strike three. The 19-year-old outfielder seemed pretty sure it was outside and he let the ump know in a quick conversation at home plate. The call ended a 10-pitch frame by Houston's right-hander. Gio Gonzalez gave up a one-out single by J.D. Martinez in the bottom of the fourth, then Angel Hernandez called the second balk of the game [It's Me, Angel!], this one on Gio. Martinez moved to second on the balk, took third on a wild pitch that bounced off Kurt Suzuki, and scored on a sac fly to right by Carlos Corporan. 3-2 game after four. Gio was up to 48 after a 20-pitch inning.

• Harper vs Hernandez Pt 2: Adam LaRoche walked with one down in the fifth, but Michael Morse hit into a 6-4-3 DP to end a 15-pitch inning by Galarraga. Jose Altuve took a two-out walk in the bottom of the inning, the first Gonzalez issued in 4.2 IP. The Astros' second baseman stole his 23rd base of the year with Matt Downs at the plate, but was stranded when Downs grounded out to short to end a 13-pitch inning by Gio Gonzalez, who was up to 61 pitches overall. Still 3-2 D.C. Jayson Werth walked to start the sixth and took second on a single to right by Danny Espinosa. Armando Galarraga issued his fifth walk of the night to Kurt Suzuki to load the bases before he was lifted. Right-hander Xavier Cedeno got a force at home on a grounder to third by Gio Gonzalez. Steve Lombardozzi popped up for out no.2. Another pitch low and away that Bryce Harper thought was ball four was called a strike by Angel Hernandez as Harper headed down to first and after the Nats' outfielder returned to the plate, he was rung up on a 3-2 fastball that was too close to take after the two previous called strikes. Still 3-2 Nats.

• 1 for 12, But E:5 = Run: Gio Gonzalez issued his second free pass of the game, surrendering a one-out walk to Justin Maxwell before retiring the next two batters to complete a 13-pitch 6th at 74 pitches overall. Astros' right-hander Chuckie Fick took over and gave up a leadoff double by Ryan Zimmerman. No. 25 of 2012 for Zimmerman, and a wild pitch moved the Nats' third baseman to third. Adam LaRoche grounded out too sharply to a drawn in Jose Altuve at second for Zimmerman to score on out no.1 of the inning. Michael Morse grounded back to the mound for out no.2, leaving the Nats 1 for 11 w/ RISP tonight. Jayson Werth stepped in with two down and went down 0-2 before grounding to third where Matt Downs fielded it before bouncing a throw to first that Astros' 1B Steve Pearce couldn't pick. Zim scored on the E:5. 4-2 Nats after six and a half. Gio Gonzalez got Marwin Gonzalez and Ben Francisco swinging for outs no. 2 and 3 and K's no. 5 and 6 to end a seven-pitch bottom of the seventh in Minute Maid Park. 81 pitches total for Gio in 7.0 IP.

• CG? Maybe?: Chuckie Fick gave up a two-out walk to Bryce Harper before a Ryan Zimmerman groundout ended the top of the eighth. Gio Gonzalez came back out for the bottom of the inning. The Nats' lefty hit Steve Pearce with two down and gave up a two-out single by Justin Maxwell. but a groundout to short by Chris Snyder ended an 18-pitch frame, after which Gonzalez was at 99 pitches. Gio Gonzalez came back out for the ninth after a scoreless top of the inning by Astros' reliever Rhiner Cruz...

• Gio Goes For CG: A groundout to short by Carlos Corporan started the ninth. Houston infielder Brandon Barnes collected his first MLB hit on a line drive to right with one down. Marwin Gonzalez grounded out to second for out no.2. Ben Francisco lined to left with two down, and Roger Bernadina did it aga-- no. Shark dove but came up empty. A run scored. 4-3. Gonzalez stayed in to face Jose Altuve lined to center with two down, moving pinch runner Brian Bogusevic around to third. An ill-advised throw in from Harper put runners on second and third. Matt Downs stepped in against Gio Gonzalez with Ryan Mattheus warming in the Nats' pen, but the Nationals' reliever wasn't needed as Gio got a swinging K from the Astros' infielder to end it. 4-3 final. Gio throws a complete game on 117 pitches. 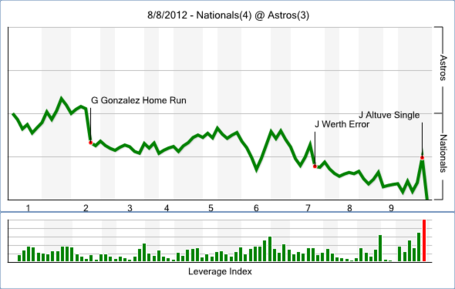