I realize this is so 12-hours-ago and Grant Brisbee at the SB Nation's Baseball Nation already covered the same territory with pictures that move, but whatevers, I figured it was still worth a quick look and would be helpful for anyone who hasn't seen the images or strike zone maps. Where do we start? Bryce Harper's not looking too hitterish these days. The Nats' 19-year-old outfielder is looking "slumpish", honestly, but until last night he was handling it all fairly well. Including last night's 0 for 3, two-walk game, the 2010 no.1 overall pick is 18 for 102 (.176/.276/.265) with a double, triple, two home runs, 14 walks and 26 K's in 26 games since the All-Star Break. Until last night, however, Harper was quietly plugging along.

A few questionable called strikes (i.e.: "Not strikes.") set the Nationals' rookie off and had him arguing vociferously with oft-maligned home plate umpire Angel Hernandez. Harper wasn't tossed from the game, however, and as you'll see below, he had a pretty good argument (and probably a better understanding of the strike zone than the umpire), but it wasn't Harper's actions at the plate that had Nats' skipper Davey Johnson considering giving Harper a night off in tonight's series finale, it was an ill-advised throw in the ninth inning that put the winning run in scoring position in a one-run game...

After Houston had rallied to get within a run at 4-3, Astros' second baseman Jose Altuve singled to center and Harper came up throwing and sailed one over third that Gio Gonzalez (backing up, luckily) had to dive for in order to keep the tying run from coming in. As the Nationals' manager explained, it appeared to him to be the first time Harper was taking his issues at the plate onto the field. "That's just a rookie mistake," Johnson said when asked about the throw, "I think maybe he took his [at bats] into the outfield. You can't allow the winning run to go to second. That's 101 of baseball. He knows it. He was being just a little overly-aggressive and it didn't hurt nothing. But that's not a mistake you need to be making when you're in a pennant race."

"I mean, there were some questionable pitches," Johnson continued, "He's pressing a little bit. I think I'm going to give him a day off tomorrow. I'm going to let him regroup a little bit. Like I said, I thought that throw to third was a little frustration at him being in some situations that he likes to be in and didn't have good AB's. So, I'll let him step back a little bit."

Why was Harper so mad? Home plate umpire Angel Hernandez's low, outside called strikes got to the Nats' rookie. Harper walked on six pitches in his first at bat. No issues there. The second time up, Harper grounded out to end the Nationals' second. In the top of the fourth, however, Harper was rung up on strikes when he took a 1-2 sinker outside that was called strike three by Hernandez...

• Here's a screencap via Fox Sports Houston's broadcast (you can see the ball snow-coned in the catcher's mitt): 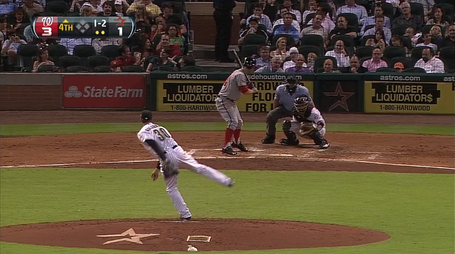 Harper clearly thought the pitch was low and probably had a good argument. To give Angel Hernandez a little credit, he probably could have tossed Harper here, considering the 19-year-old shared his opinion, arguing with the ump and was clearly pretty heated. As Washington Post writer Adam Kilgore noted in last night's game story, however, the umpire had no problem with Harper express his opinion:

"Hernandez told a pool reporter he did not consider ejecting Harper. "Let him have his say," Hernandez said. "Nothing wrong with that."

• Here's the Strike Zone Plot of the pitches in that AB from Houston's Armando Galarraga via Brooks Baseball: 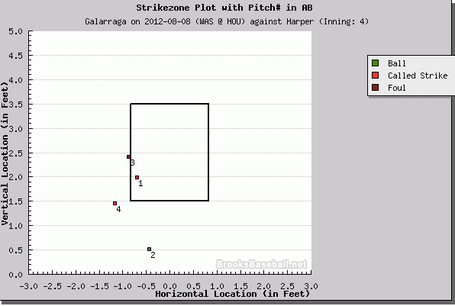 Pitch no.4 is clearly not in the zone. Harper didn't get tossed, however, he had his say, was ushered away from the conversation and remained in the game. The next time Harper stepped up, the bases were loaded with two down in the sixth after two Nats' hitters had failed to bring in a run in what was then a 3-2 game in the Nationals' favor. Harper took three balls from Astros' left-hander Xavier Cedeno, and then took a called strike on a 3-0 pitch that he had no issue with. The 3-1 pitch? (via Fox Sports Houston's broadcast): 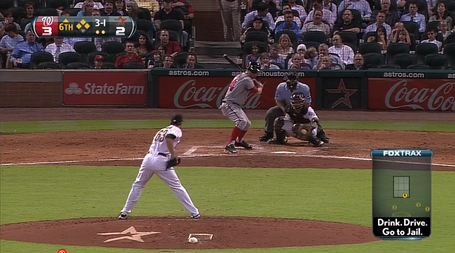 Ball four, right? Harper thought so and started walking to first before a called strike stopped him in his tracks. 3-1 count. Harper was jersey-biting mad... 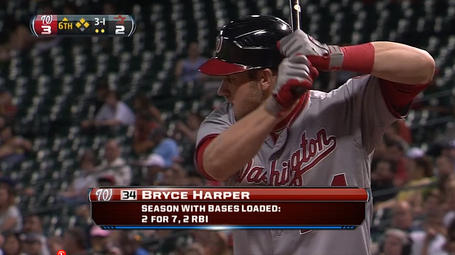 Then the 3-1 pitch from Cedeno came in low again. You guessed it. Called strike three... (Image via Fox Sports Houston's broadcast): 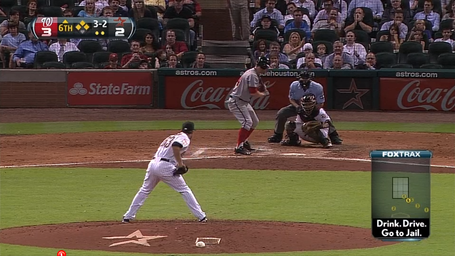 So maybe the 3-2 pitch was too close to take, especially after Hernandez had called two pitches that were down in the same area strikes, but Bryce Harper has another good argument on this one too according to Brooks Baseball's strike zone plots: 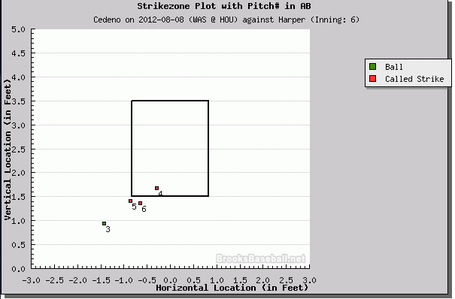 The first two pitches were balls in the dirt that apparently didn't register. They were not called strikes. Neither of the two (3-1 or 3-2) pitches nos. 5 and 6 were strikes according to Brooks Baseball's Strike Zone plots. Angel Hernandez thought they were strikes. Harper was hot. He just about tossed his bat, but stopped himself. Tossed his helmet and turned his back to the plate as he voiced his displeasure then went out to play center. Nats' first baseman Adam LaRoche told the WaPost's Mr. Kilgore that he asked Hernandez what was going on:

"I talked to Angel about it right after that at-bat," first baseman Adam LaRoche said. "I said, ‘What’s going on? From where I’m at, those balls are down.’ He assured me that they were good pitches. He said he would never do that to Bryce, he loves him, he loves the way he plays and that there’s no kind of initiation there. He called it the way he would call it to anybody."

Three innings later, after Harper had walked for the second time in his final at bat, the Astros rallied, Harper made the ill-advised throw, but it didn't come back to haunt him. The Nationals haven't announced tonight's lineup yet. Will Davey Johnson give the 19-year-old outfielder a night off? Or let him work his frustrations out at the plate?