• 10 Wins? For the Astros? Impressive: Top of the first in Houston. 27-year-old Astros' starter Lucas Harrell had to hit the dirt when he was knocked flat on his back or "Charlie Browned"* on the mound by a well-struck, one-out, line drive single to center off Washington Nationals' outfielder Roger Bernadina's bat. The Nats' center fielder stole second base (12) with Ryan Zimmerman up and took third when Zim flew out to center, but Adam LaRoche too flew out to former Nationals' outfielder Justin Maxwell for the third out of the inning and the so-called "Shark" was stranded at the end of the first in the finale of the Nats' four-game visit to Minute Maid Park. 21-pitch inning by the one-time Chicago White Sox' prospect selected off waivers by the 'Stros last July.

• The Jordan Zimmermann Show: 26-year-old Nats' starter Jordan Zimmermann needed 13 pitches to retire the Astros in order in the bottom of the first, and he was back on the mound quickly after Harrell retired the Nationals in order in a 19-pitch top of the second. Home plate ump Ed Hickox wasn't giving Harrell the low outside corner on right-handers, and he didn't look like he was going to give it to Zimmermann either, but Justin Maxwell couldn't hold up and he was punched out on a 96 mph 3-2 four-seamer outside. K no.1. Brett Wallace doubled for the fourth time this year on a 3-1 heater from the Nationals' starter, lining to left-center with one down. J.D. Martinez chased a filthy 2-2 slider outside for out and K no.2 for Zimmermann, who hit Scott Moore with the 19th pitch of the inning before inducing a grounder to third off Chris Snyder's bat to ended a scoreless 22-pitch second. Still 0-0...

[ed. note - * = "I wish I could take credit for that description, but it was FP Santangelo on MASN (and, uh, Charles Schulz) who had me laughing with that one."]

• Just Filthy: Zimmermann K'd swinging in his first at bat of the night for the second out of a 1-2-3 third by Houston's starter, then returned the favor, punching the opposing pitcher out on a 95 mph 2-2 four-seamer for out no. 1 of the Astros' half of the inning. K no.3. Jose Altuve chased a brutal 0-2 fastball outside for out no.2 and K no.4 and K no.5 came courtesy of an 0-2 slider inside that Marwin Gonzalez had no hope of hitting. 5 K's total after a 13-pitch 3rd, 48 pitches overall in 3.0 scoreless by Zimmermann.

• [CHOMP!], [CHOMP!]: Roger Bernadina was 2 for 2 with two line drive hits after he started the Nationals' fourth with a single to left field in Minute Maid Park. The Shark was 2 for 2 in stolen base attempts on the year too after he swiped his 13th a pitch before Ryan Zimmerman walked. Adam LaRoche stepped in with two on and no one out, and sent a broken bat liner to right that fell in for an RBI hit. 1-0 Nats. Bernadina scored from second, Zimmerman took third and a Michael Morse sac fly to right in the next at bat allowed Zim to tag and score. 2-0 D.C. in Houston. Lucas Harrell loaded the bases for Jordan Zimmermann with a two-out walk to Kurt Suzuki, but retired the opposing pitcher to end a 32-pitch frame at 83 pitches overall. Steve Pearce got a low liner by Ryan Zimmerman at third for a leadoff double to left off Jordan Zimmermann in the home-half of the fourth. The Nats' third baseman looked Pearce back then fired to first when Astros' outfielder Justin Maxwell grounded out in the next at bat. Zimmermann threw a 94 mph 2-2 fastball by Brett Wallace for out no.2 and K no. 6 before he got a fly to right from J.D. Martinez to end a 13-pitch inning at 51 overall. Still 2-0 Nats.

• Strikes. Out. Side.: Steve Lombardozzi battled for eighth pitches and singled to start the fifth, but he was quickly erased from the basepaths when Roger Bernadina grounded into a 6-3 DP. Lucas Harrell got a groundout to second from Ryan Zimmerman for out no.3 and completed a 15-pitch top of the 5th. Jordan Zimmermann got a called strike three with a 95 mph 2-2 fastball inside to Astros' infielder Scott Moore. K no.7 in 4.1 IP. Chris Snyder was completely fooled by a 1-2 slider and he went down swinging. K no.8 for Zimmermann. No. 9? A full-count fastball to pinch hitter Brandon Barnes got a swinging strike three to end 16-pitch frame that had the Nats' starter at 77 overall in 5.0 scoreless innings against the Astros.

• MORSE CRUSH: Right-hander Mickey Storey took over for Houston in the sixth, and surrendered a one-out bomb of a home run by Nats' left fielder Michael Morse. HR no.9 of 2012 for the Nationals' slugger, who might have put that one on the tracks if not for the signs hanging down over the Crawford Boxes. 3-0 Washington after five and a half in Minute Maid Park. [+25 pts for Morse extending his hit streak to 18 games.] Marwin Gonzalez singled with one down in the Astros' sixth, but Jordan Zimmermann struck Steve Pearce out with an 85 mph 1-2 slider for K no.10 and got Justin Maxwell to chase an 0-2 slider for K no.11. 11 K's, 6.0 scoreless. 87 pitches overall for Zimmermann after a 10-pitch frame. [+25pts for Zimmermann, who ties a career-high in K's.]

• MOAR MORSE: Tyler Moore hit for Zimmermann with one out in the top of the seventh, striking out. Xavier Cedeno gave up a leadoff single by Kurt Suzuki and a two-out walk to Roger Bernadina before he was replaced on the mound by Fernando Rodriguez, who retired Ryan Zimmerman to end the top of the seventh. Still 3-0 Nationals. Nats' lefty Michael Gonzalez gave up a leadoff single by Brett Wallace, but got a 4-6-3 DP and a swinging K to end the Astros' half of the inning. After hitting one out to right earlier in the game, Michael Morse connected for his second blast of the series finale and his 10th of 2012 with one down in the Nationals' eighth, sending an oppo-boppo blast out to right off Fernando Rodriguez to make it a 4-0 game after seven and a half in Minute Maid Park. Sean Burnett had a runner reach on a two-out error by Danny Espinosa, but recovered to strike Marwin Gonzalez out to end a scoreless eighth. Still 4-0 Nats.

• FINISH THEM!!: Astros' lefty Wesley Wright gave up back-to-back singles by Cesar Izturis and Steve Lombardozzi in the top of the ninth. Roger Bernadina bunted his way on to load the bases and end Wright's night. New Astros' reliever Chuckie Fick gave up a sac fly to center by Ryan Zimmerman that made it 5-0 Nats before Adam LaRoche grounded into an inning-ending 4-6-3. Drew Storen struck Steve Pearce out to start the 9th, but walked Justin Maxwell with one down. Brett Wallace followed with a single to put two runners on before a 5-4-3 DP off J.D. Martinez's bat ended the series finale in Houston. 5-0 Nats.

The Nationals sweep the Astros, win their sixth-straight and their 16th of their last 21 and they tie 2010's win total with tonight's Curly-W. 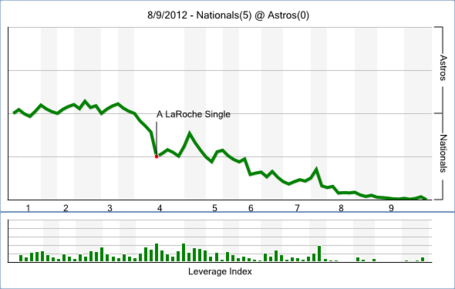