• 2 E's Hurt Cards: Jon Jay worked the count full and singled to center via the left side of second on a grounder not even the rangy Ian Desmond could run down. Jay's hit came on the seventh pitch Jordan Zimmermann threw in the game opening AB in D.C., but the St. Louis' Cardinals' outfielder got caught stealing with Matt Carpenter up on a strong throw to second by catcher Kurt Suzuki, and the CS hurt even more when Carpenter singled to left on the ninth pitch of the second at bat. A 95 mph 2-2 fastball low and away got Matt Holliday looking for out no.2 and Allen Craig grounded to third and into a force at second that ended a 27-pitch top of the inning by the Nats' 26-year-old right-hander.

Bryce Harper tore *** around first and slid headfirst into second ahead of a throw in by Matt Holliday with his 19th double of 2012 on a one-out bloop hit to short left off Cards' starter Kyle Lohse. One out later, Adam LaRoche jumped on a 74 mph first-pitch curve from Lohse and lined to right to bring Harper around and make it 1-0 Nats early in the nation's capital. Michael Morse singled with two down to put two on for Ian Desmond, and right when it looked like Desmond had flown out to deep left to end the inning, Matt Holliday dropped the ball on the track and two runs scored on the error to make it 3-0 Nationals. An error by Daniel Descalso at short on a Danny Espinosa grounder put runners on first and third with two out and another RBI single by Kurt Suzuki gave Washington a 4-0 lead after one in Washington...

• Adam LaRoche Does It Again: Ian Desmond flashed the leather at a liner by Yadier Molina that just cleared the leaping Nats' shortstop for a leadoff single to left in the Cardinals' second. Jordan Zimmermann missed with a 1-2 curve that he thought was strike three, but home plate ump Wally Bell disagreed and David Freese got hold of a 2-2 bender and sent a two-run blast into the Red Porch seats in left center to cut the Nationals' lead in half at 4-2 after one and a half. Kyle Lohse threw a 28-pitch first. The Cards' right-hander was on his way to a quick second when Ryan Zimmerman singled through short with two down and Adam LaRoche followed with a towering two-run HR to right that made it a 6-2 game in the bottom of the second. No. 24 of 2012 for the Nationals' first baseman.

• Uh, Zimmermann?: Jon Jay singled for the second time today to start the third, and Cards' left fielder Matt Holliday hit the second home run of the game off Jordan Zimmermann, crushing a first-pitch fastball for a two-run blast that landed several rows deep in the Red Porch seats. 6-4 Nationals. Zimmermann gave up two home runs in a game for the second time this season and the first time since June 5th against Miami. A 17-pitch frame pushed Zimmermann up to 69 pitches after 3.0 IP. Kyle Lohse had his easiest inning yet in the bottom of the frame, throwing a quick eight pitch frame, that had him at 56 innings after 3.0.

• David Freese's leadoff double to right was the fourth-straight leadoff hit for the Cards off Jordan Zimmermann, who sawed Skip Schumacher off and popped him up to short for the first out of the fourth. A one-out HBP on Daniel Descalso put two runners on, and after Kyle Lohse popped up on a bunt attempt, a two-out HBP on Jon Jay loaded the bases for Cards' first baseman Matt Carpenter whose two-out, three-run double gave St. Louis the lead. Just short of a home run and after a two-out walk to Matt Holliday, Jordan Zimmermann was done with St. Louis up 7-6. The 3.2 IP was Zimmermann's shortest outing since back-to-back 3.0 inning efforts in September 2010 when he was working his way back from Tommy John. A two-out single by Allen Craig added another ER to Zimmermann's line and made it 8-6 Cardinals after three and a half in D.C.

• Stammen and Lohse Working: Bryce Harper lined a 91 mph 2-2 sinker to right for a two-out single in the Nationals' fourth, but Ryan Zimmerman popped up to end an 18-pitch 4th by Kyle Lohse. Craig Stammen needed nine pitches to get through a 1-2-3 top of the fifth, then Lohse came back out and threw a 5-pitch, 1-2-3 bottom of the frame. After a 14-pitch top of the sixth, Craig Stammen had set seven Cardinals in row down and completed 2.1 scoreless on 28 pitches. Still 8-6 St. Louis. Lohse left an 0-1 change up and in for Danny Espinosa in the Nationals' sixth and the Nats' second baseman crushed it, sending a solo home run to right and over the out-of-town scoreboard to cut the Cards' lead in half. 8-7 St. Louis after Espinosa's 15th...

• The Big Comeback: Jayson Werth doubled off the right field wall with two down in the Nats' sixth, collecting his 15th two-base hit of 2012 and knocking Kyle Lohse out. Cards' lefty Mike Rzepczynksi took over with Bryce Harper up. The Nats' 19-year-old outfielder spit on a low 2-1 sinker and the 3-1 pitch, drawing a two-out walk in front of Ryan Zimmerman. The Cards turned to right-hander Fernando Salas with Zimmerman up and Zim singled to right to bring Werth in and then drew a throw to second by rounding first aggressively, allowing Harper to sprint home from third and score the go-ahead run. 9-8 Nationals after six in D.C. Smart, smart play by the Nats' three-hole hitter.

• 9-9 In The 8th: Ryan Mattheus took over in the seventh, giving up a one-out single by Allen Craig, but retiring the Cards without the Cards' outfielder leaving first base in a 12-pitch scoreless top of the seventh. Cards' right-hander Edward Mujica retired the Nationals in order on seven pitches in the bottom of the inning with help from Jon Jay, who made a twisting, turning catch in deep center to rob Danny Espinosa of a two-out extra base hit. Sean Burnett walked Shane Robinson in a nine-pitch at bat in the top of the eighth. A sac bunt moved Robinson to second and an RBI single to center by Carlos Beltran brought the runner in and tied it at 9-9. Jon Jay singled in the next at bat for his third hit of the game, but Danny Espinosa made a tough play on a grounder up the middle by Matt Carpenter for the second out of the inning then got double-switched out of the game as Drew Storen came on and Steve Lombardozzi took over at second. Matt Holliday vs Storen. Runners on second and third. Check-swing strike three. 9-9 in the 8th.

• HCBB And Eury: Chad Tracy pinch hit for Kurt Suzuki in the bottom of the eight and flew out to deep center where Jon Jay made another nice catch while crashing into the wall. Cards' right-hander Mitchell Boggs got a weak groundout from Lombardozzi and a fly to center from Jayson Werth for a scoreless bottom of the eighth. Storen came back out for the ninth with Jesus Flores catching and Eury Perez in center making his MLB debut. Allen Craig lined to left on a 1-2 slider from Storen for another leadoff hit. Yadier Molina flew to left for out no.1, but David Freese lined a 2-2 sinker to left to bring the go-ahead run in and make it 10-9 Cards in the top of the ninth.

• Another Comeback?: Cards' Jason Motte came on in the bottom of the ninth. Bryce Harper K'd swinging through a 99 mph 1-2 heater upstairs. Ryan Zimmerman grounded to first for out no.2 and LaRoche flew to center to end the game. 10-9 Cards win. 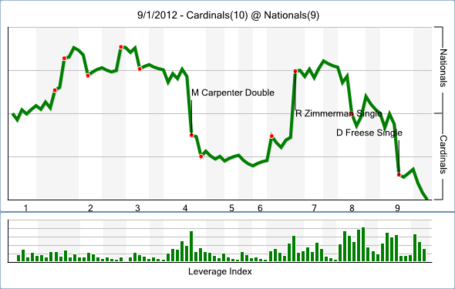