• Pepsi Porch 1st: Washington Nationals' lefty Gio Gonzalez had already faced the New York Mets three times this season and four times in his career before tonight, posting a 3.13 ERA over 23.0 IP vs the Nats' NL East rivals from NY in which he had walked eight (3.13 BB/9) and struck out 17 (6.65 K/9) while holding Mets' hitters to a .221 AVG. The 26-year-old former Oakland Athletic was coming off a month of August with Washington in which he had a 2.64 ERA, a 2.81 FIP, 11 walks (2.23 BB/9) and 39 Ks (7.92 K/9) in six starts and 44.1 IP when he made his first start of September against Chicago last time out, allowing just three hits in 7.0 scoreless against the Cubs in which he struck out nine. Gonzalez's opponent on the mound tonight in Citi Field, Collin McHugh, was an '08 Mets' 18th Round pick making his third major league start after he debuted with seven scoreless innings against Colorado back on August 23rd. The Mets' right-hander pitched around a one-out walk to Bryce Harper in the first, striking Ryan Zimmerman out with the Nats' 19-year-old runner going and getting a strike'em out throw'em out double play when a caught stealing ended a 17-pitch opening frame. Gio Gonzalez issued two walks in the bottom of the first, but he erased the first runner on a 4-6-3 DP off Ronny Cedeno's bat and stranded the second at the end of a 15-pitch inning. 0-0 after one in Flushing, Queens.

• Gio In The Mo's Zone: Adam LaRoche's 29th double of 2012 bounced off the warning track in right field and out of play underneath the Pepsi Porch for the first hit of the next-to-next-to-last game of the season series between the Nationals and the Mets. A routine groundout to second moved LaRoche to third but a swinging K by Danny Espinosa ended the top of the second with the Nats' 1B 90 ft from home. Ike Davis waved his bat at a 1-2 curve from Gio Gonzalez like he'd never seen a breaking ball before and went down swinging for the first out of the Mets' second and Gonzalez's first K, Kelly Shoppach flew to right and Jason Bay took an 0-2 fastball outside for a called strike three that ended a nine-pitch, 1-2-3 second for the Nats' left-hander.

• Over The CAESARS Atlantic City Sign: Kurt Suzuki popped up behind home only to have his counterpart Kelly Shoppach drop it and give the Nats' catcher a second chance in the first AB of the third. E:2 on Shoppach and of course Suzuki went yard two pitches later, connecting for a solo blast that made it 1-0 Nats early in the series opener in New York. Suzuki's fifth this year, fourth with the Nationals. Bryce Haper walked with two down to bring Ryan Zimmerman up and the Nats' third baseman... THE KIDS CALL HIM ZIM!! THE KIDS CALL HIM ZIM!!! Two-run blast onto the batter's eye near the HR apple in center field. 3-0 Nationals on Zim's 21st. After giving his team a three-run lead, Ryan Zimmerman helped with the glove, diving to snag a low liner off Andres Torres' bat for the first out of the home-half of the frame. Gonzalez got the opposing pitcher swinging for out no.2 and K no.3 before walking the third and fourth batters of the night in back-to-back two-out ABs that brought David Wright up with runners on, but Gio dropped a full-count curve in to get Mets' third baseman looking to end the third with his fourth K. A 24-pitch inning had Gio at 50 after 3.0.

• XEROX Blast Of The Game: Michael Morse reached safely on a broken bat grounder to short that started the fourth and Ian Desmond followed with the third home run of the game, taking a 3-2 fastball from Collin McHugh to right center and over the XEROX sign in front of the Dunkin' Donuts banner above the bullpen. HR no. 22 of 2012 for the Nationals' shortstop. 5-0 Nats over the Mets in Citi Field. Scott Hairston started the Mets' fourth with a solo HR to left-center and into the Party City Deck seats some 390 ft from home. Solo blast, 5-1 Nationals after just the 9th HR of the year allowed by Gonzalez. The home run snapped Gio's streak of 20.0 scoreless on the mound going back to his final inning of work in an August 25th outing against Philadelphia. Gonzalez gave up his fifth walk of the night in the next at bat and a two-out double by Andres Torres before popping Justin Turner up to end a 27-pitch frame at 76 pitches overall.

• Elvin Ramirez Brings Cholula Hot Sauce Heat: Elvin Ramirez, a one-time Nats' Rule 5 pick from NY who ended up going back to the Mets, gave up a leadoff walk to Jayson Werth before retiring the next three batters, popping up Harper and throwing fastballs by Ryan Zimmerman and Adam LaRoche in a 19-pitch fifth. Still 5-1 D.C. Ruben Tejada worked the count full and singled to short right to start the Mets' fifth, but three outs later he was stranded on the basepaths after Gio Gonzalez completed a 15-pitch frame at 92 pitches overall, 51 of them strikes. The Mets' Ramirez returned for the sixth and put a runner on with two out when he walked Danny Espinosa, before striking out Kurt Suzuki to end his second inning of work after 20 pitches. Gio Gonzalez came back out for a sixth inning of work in Citi Field and threw a quick 12-pitch 1-2-3 frame to end his night after : 6.0 IP, 3 H, 1 R, 1 ER, 5 BB, 6 Ks, 104 P, 58 S, 5/3 GO/FO.

• 5-1 On Citi Vision Scoreboard: Ramon Ramirez pitched the Mets' seventh, retiring the Nationals in order in an 18-pitch frame. Ryan Mattheus needed just 12 pitches to set the Mets down in order in the bottom of the frame. Right-hander Jeurys Familia took over for New York in the eighth and threw a nine-pitch, 1-2-3 inning, retiring the seventh-straight National to end the top of the frame. Drew Storen came out for the bottom of the eighth and gave up a leadoff single on a 1-2 slider to Daniel Murphy. David Wright lined a 3-1 pitch to right for the second straight hit to start the inning. Storen fell behind Scott Hairston 3-1 then got a called strike with a low fastball and a check-swing strike three with a slider outside. Storen then got a 4-6-3 DP out of Ike Davis to end a 17-pitch frame with Washington's four-run lead intact.

• Hankook Tires 9th: Jeurys Familia's second inning or relief work was a quick 11-pitch frame in which he retired Ian Desmond, Danny Espinosa and Kurt Suzuki in order. Tyler Clippard came on in a non-save situation in the bottom of the ninth. Jordany Valdespin grounded out to first. ONE!!! Jason Bay grounded to third. TWO!!! Fred Lewis K'd swinging to end a 6-pitch frame. Gio Gonzalez wins his 19th!! 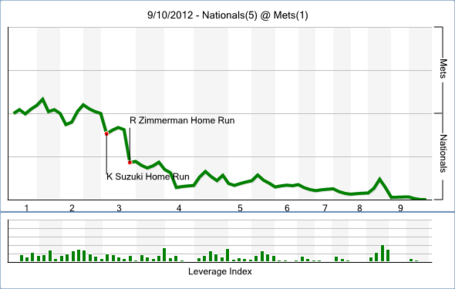