• 4th 1st Inning Run: The Washington Nationals are one of four teams along with the Atlanta Braves, San Diego Padres and Cincinnati Reds, that have managed to beat 37-year-old New York Mets' knuckleballer R.A. Dickey in what looks like it might be a Cy Young Award-worthy 2012 campaign. In his last two outings against NY's NL East rivals from D.C., the veteran of 10 MLB seasons has surrendered a total of 18 hits and nine runs, seven earned in 13.1 IP. The first two Nats the right-hander faced tonight reached base with Jayson Werth (12 for 26 vs Dickey) singling up the middle and Bryce Harper (1 for 11) doubling down the left field line for the 19-year-old rookie's first career hit off New York's veteran starter. Nats' third baseman Ryan Zimmerman flew to right in the third at bat of the game, and it was deep enough to score Werth and make it 1-0 Washington early on the road in Citi Field. That's just the fourth earned run Dickey's allowed in the first inning this season. It was the only one he gave up in the first tonight.

• 33-Pitch 1st: Ruben Tejada singled up the middle on a 94 mph 2-2 fastball from Jordan Zimmermann, who missed with a low full-count fastball to Daniel Murphy and put the first two Mets on base in the bottom of the first. The Nats' right-hander fell behind David Wright 3-0 but battled back and dropped a full-count curve on the Mets' third baseman to get a called strike three. Zimmermann missed with a full-count curve to Ike Davis and walked the first baseman to load the bases with one down, but then struck Mike Baxter out with an 0-2 bender and threw a 1-2 fastball by Jason Bay to end the first with his third K.

• 44 P in 2.0 IP: R.A. Dickey threw 19 pitches in the first. His 20th pitch of 2012 was lined to right-center by Ian Desmond for a leadoff double (no.29) in the top of the second. One out later Desmond was thrown out by Josh Thole when he tried to steal third and a Kurt Suzuki groundout ended a seven-pitch frame by the Mets' knuckler. Andres Torres popped a bunt attempt up on the first pitch of the Mets' second, but after a one-out single to left by Josh Thole, R.A. Dickey bunted one right to Adam LaRoche to start a 3-6-4 inning-ending DP. 11 pitch second for Zimmermann after a 33-pitch frame.

• Werth Pwns Dickey: Jayson Werth walked with one down in the Nats' third and Bryce Harper singled for the second time in two at bats tonight after he'd entered the game 0 for 10 vs the knuckler R.A. Dickey. Harper told reporters last night he didn't expect to start against Dickey. "In, out, up, down, back and forth, light, heavy, tried it all. Just can't hit the guy," Harper told reporters. Davey played the kid anyway and he managed to get on twice in his first two at bats. Both runners were stranded, however, when Dickey got fly ball outs from Zimmerman and LaRoche to end a 14-pitch inning. Rubin Tejada was 2 for 2 tonight after singling to start the Mets' third. Daniel Murphy flew to center for the first out of the Mets' third and David Wright K'd swinging at a 1-2 slider for the second strikeout in two at bats but Ike Davis wouldn't bite on a 3-2 curve and he walked with two down before Mike Baxter flew to left to end a 24-pitch inning that had Zimmermann at 68 overall after 3.0 scoreless.

• 3 for 3 vs Dickey: R.A. Dickey threw a quick, six-pitch, 1-2-3 4th vs the Nationals. Bryce Harper dove in center to catch a knuckling fly to center off Jason Bay's bat, Ryan Zimmerman leapt to bring down a line drive by Andres Torres and Jordan Zimmermann took care of Josh Thole himself, throwing a 93 mph full-count fastball by the Mets' catcher to end a 15-pitch inning at 83 pitches overall. Dickey retired the first two Nats in the fifth on five pitches before walking Jayson Werth for the second time tonight. Bryce Harper collected his third-straight hit off Dickey in the next at bat, but Ryan Zimmerman popped to short to end the Nats' fifth. 13-pitch inning for Dickey. Ruben Tejada singled for the third time tonight with one down in the Mets' fifth and then scored when Daniel Murphy double to left field. 1-1 game and 2-1 when Ian Desmond dove and missed a grounder to short by David Wright that brought Murphy in. 2-1 NY. 104 pitches total for Zimmermann after a 21-pitch frame.

• Moore, Tyler Moore: Adam LaRoche walked to start the fourth, but Michael Morse rolled into a 4-6-3 DP in the next AB before Ian Desmond flew to right to end a 10-pitch frame by R.A. Dickey... Tom Gorzelanny took over for Jordan Zimmermann after 5.0 IP, 6 H, 2 R, 2 ER, 3 BB, 6 Ks, 104 P, 67 S, 1/3 GO/FO. Jason Bay reached safely in the first at bat of the Mets' sixth on a throwing error by Ryan Zimmerman that pulled Adam LaRoche off the bag. Andres Torres K'd swinging in the next at bat, however, and Josh Thole grounded into an inning-ending 4-6-3. 10-pitch frame for Gorzelanny. R.A. Dickey gave up a one-out single by Kurt Suzuki in the Nationals' seventh and Tyler Moore crushed the first pitch he saw from the Mets' starter, sending his 9th HR of 2012 soaring out to right for a 3-2 Nats' lead. Jayson Werth singled with one down, but Bryce Harper grounded into a 6-3 DP to end the top of the seventh.

• Christian Garcia Is Filthy: Former NY Yankees' prospect Christian Garcia took over in the bottom of the seventh, starting Jordany Valdespin 3-0 before battling back and striking the Mets' pinch-hitter out with a brutal 3-2 change. Ruben Tejada K'd swinging at a 1-2 change in the dirt for out and K no.2 and Daniel Murphy got a 1-2 curve he had no hope of hitting. 3 Ks on 14 pitches.

• The Baxter, So Close: Ryan Zimmerman singled through short off Mets' right-hander Jon Rauch to start the eighth and extend his current hit streak to 15 games. Mike Baxter dove for a line drive to right by Adam LaRoche but came up empty, allowing Zimmerman to go first-to-third™ on the hit. Zim tried to score on a grounder to short by Michael Morse, but he was dead to rights at home for the first out of the inning and Ian Desmond rolled into an inning-ending 4-6-3. Still 3-2 Nats in the eighth. Christian Garcia got a fly to right from David Wright for the first out of the Mets' eighth before he was replaced on the mound by Mike Gonzalez. Ike Davis K'd swinging at a hanging slider. Drew Storen came on try for out no.3 from Lucas Duda and popped him up to end the inning.

• Ready or Not: Danny Espinosa doubled to right for his 34th two-base hit of 2012 to start the Nats' ninth then scored on an RBI single to center by Kurt Suzuki as Mets' right-hander Frank Francisco gave up a run. 4-2 Nats. Chad Tracy dumped a single in short center in the next at bat before Eury Perez came on to run for the veteran bench bat. Jayson Werth walked to load the bases with no one out and Bryce Harper due up against a new pitcher. Josh Edgin on for NY and he gives up an opposite field single and Harper's 4th hit of the night. 5-2 Nationals. First 4-hit game for the Nats' 19-year-old rookie. Tyler Clippard came on in the bottom of the ninth looking for save no. 31 of 2012 after the Nats failed to add to their lead in the top of the frame. Fred Lewis K'd swinging! ONE!!! Scott Hairston took a 1-0 fastball from Clippard to left for a solo apple-raising blast. 5-3 Nats. Josh Thole grounded out to first. TWO!! Ronny Cedeno kept hope alive with a two-out single over short, but Ruben Tejada K'd chasing a change for out no.3. Save no.31 of 2012. Win no. 88 of the year. 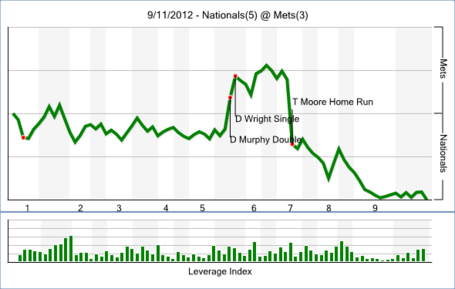