• Shut. Down.: As of last Friday, 23-year-old New York Mets' 2010 1st Rounder Matt Harvey was supposed to face 24-year-old Washington Nationals' '09 no.1 overall selection Stephen Strasburg tonight in the series finale between the Nats and the Mets in Citi Field in Flushing, Queens in what was supposed to be the last start of the Nats' right-hander's 2012 campaign. Strasburg was shut down earlier than expected, however, with Davey Johnson telling him he was done for the year last Saturday after a rough outing at home against Miami which the Nationals' 69-year-old skipper said was at least in part the result of Strasburg's discomfort with the decision to shut him down and the coverage as the entire baseball world followed and questioned the premature end of his first full post Tommy John surgery season.

Harvey told the Newark Star-Ledger's Andy McCullough yesterday that he understood the, "... the sensation, feeling 'kind of like helpless in the situation,'" that Strasburg finds himself in right now. but didn't want to imagine what it was actually like for the pitcher to shut it down as the postseason approached for Strasburg's teammates. With much less fanfare, Harvey's season will end after one last start following tonight's as part of what Mr. McCullough wrote is an, "... organizational plan designed to build arm strength," amongst the organization's young pitchers. That sounds ridiculous to me. He hasn't even had elbow surgery... has he? Well he looks perfectly healthy to me. Why shut him down!!!?!?!?!...

John Lannan took Strasburg's place on the mound, starting the game with a streak for 20.0 scoreless frames going back over three starts at Triple-A Syracuse. How long would Lannan's streak last?

• LIke The End Of Lost In Translation: Jayson Werth had some advice for Bryce Harper that whispered to his fellow outfielder as he headed back in after striking out on a relatively flat 1-2 slider inside. Harper took the same pitch in pretty much the same place for a called strike three and out no.2 though it was outside for the left-handed batter as opposed to inside for Werth. Ryan Zimmerman missed a 96 mph 2-2 fastball as Harvey struck out the side in a 14-pitch, 1-2-3 first. Instead of the Nats' no.1 starter, the Mets met 27-year-old '05 11th Round pick John Lannan, the veteran lefty who was stashed at Triple-A all season and brought up along the way for two spot starts and now to take Strasburg's place in the rotation. Lannan gave up a two-out single and stolen base by David Wright, but finished a scoreless opening frame after 18 pitches.

• W/ Help From Zim: Ian Desmond ripped into a 3-1 fastball from Harvey, lining to center with one down in the second after the first four Nationals had struck out to start the game, but Roger Bernadina popped and Kurt Suzuki struck out to end a 22-pitch second by the Mets' right-hander. Lucas Duda started the bottom of the second with an opposite field single to left. Steve Lombardozzzi lunged for a line drive to center off Kelly Shoppach's bat, but it was already in center for the second straight hit to start the inning. Ryan Zimmerman made the choice to take a force at second on a weak grounder over the mound by Jason Bay. Andres Torres lined too sharply to left and right at Roger Bernadina, who fired it back in to hold the runners at first and third and Zimmerman dove on a sharp grounder by the opposing pitcher and fired a quick throw to Lombo for a force at second that ended a seven-pitch second inning by John Lannan.

• I Believe In Matt Harvey Dent: Lannan was the sixth National to strike out when he K'd swinging through an 0-2 fastball from Matt Harvey for the second out of the Nats' third, but Jayson Werth was the first Washington batter to walk when he took a six-pitch free pass from the Mets' starter. Bryce Harper popped to second to go 0 for 2 against the pitcher selected five spots after Harp went to Washington no.1 overall in 2010. A 17-pitch 3rd had Harvey at 53 pitches overall.

• RZCPI?: Ryan Zimmerman couldn't pick it. The Nats' third baseman let a grounder to third by Ruben Tejada go through his wickets for Zim's 16th error of 2012, but the Nationals' infielder took the force at second again on another weak grounder over the mound, this one by Ronny Cedeno. Cedeno got picked off for out no.2 before a full-count pitch to David Wright and the Mets' third baseman grounded to short. Grounder. Desmond. Out. 36 pitches in 3.0 scoreless after a 10-pitch third by John Lannan.

• TKCHZ: All the worries about Zim's awkward throws and occasional E's were erased on a 1-0 fastball in the first at bat of the fourth, when the Nats' 27-year-old third baseman lined to left-center and into the Party City Deck for a solo blast and a 1-0 Nats' lead. HR no. 22 of 2012 for no.11. 16-game hit streak extended. Roger Bernadina reached safely on a two-out grounder to first when Matt Harvey dropped the throw to first from the Mets' first baseman, but Kurt Suzuki grounded out to end a 17-pitch 4th with the Mets' starter at 70 pitches overall. A weak grounder to second by Scott Hairston and a weak fly to right by Lucas Duda had Lannan through 3.2 after just seven pitches. Six pitches later he struck Kelly Shoppach out to finish his four scoreless after 49 pitches. 1-0 Nats.

Ryan Zimmerman: 9th straight game with an RBI. That's a National/Expos franchise record. He has a 16-game hitting streak, best active in NL

• Cool Hand Cruising: Steve Lombardozzi singled on a bloop to left field that dropped between all three members of the left side of the Mets' defense. John Lannan struck out trying to bunt Lombardozzi over and Jayson Werth K'd looking for the ninth strikeout by the Mets' rookie starter. Harvey and Harper battled in a seven pitch, two-out at bat that ended with Harper chasing a changeup for Harvey's 10th K in 5.0 IP. 92 pitches total for the Mets' starter after a 22-pitch inning. Jason Bay's groundout to second was the 8th ground ball out of the night for Lannan. Andres Torres lined over Lombo at second for New York's fourth hit off the Nationals' left-handed starter and Matt Harvey bunted the Mets' center fielder over/gave up an out in front of Ruben Tejada, who grounded back to the mound to end Lannan's 5th scoreless inning of the night and 25th scoreless inning overall going back through his last three starts at Triple-A. A 15-pitch inning had Lannan at 64 pitches overall.

• Zim-Mer-Walks: Ryan Zimmerman walked to start the sixth, took second on a wild pitch and advanced to third when Adam LaRoche lined a single to right in the next at bat. 1st/3rd, 0 outs. Harvey's 106th pitch put Ian Desmond on and loaded the bases with no outs. Tyler Moore popped up to foul territory off first in a pinch hit at bat against Mets' lefty Robert Carson after taking over for Roger Bernadina at the plate, Kurt Suzuki popped out to second in the next AB and Steve Lombardozzi flew out to right to end a scoreless inning that began with three runners reaching. A weak groundout to third allowed Zim to do his thing, scooping up a grounder and throwing sidearm to first for the first out of the Mets' sixth. David Wright buzzed Lannan's tower in the next at bat, sending a line drive to center for a one-out single. The Nats' lefty got a fly to right from Scott Hairston for out no.2 of the Mets' sixth. Wright stole second with Lucas Duda at bat, and Duda walked to end Lannan's night. Christian Garcia came on with two on and two out and hit Kelly Shoppach with the first pitch he threw. Bases loaded for Ike Davis, but a fly to center ends the sixth.

• RISP FAIL: Mark DeRosa singled. Eury Perez took over at first and one out and two walks later the Nats' rookie outfielder was standing on third after both Jayson Werth and Ryan Zimmerman had walked to load the bases. Bobby Parnell started the inning for NY, but he was replaced with two on and one out, by Mets' lefty Justin Hampson, who got a 4-6-3 inning-ending DP out of Adam LaRoche on the first pitch he threw to the Nats' first baseman. 1-0 Nationals after six and a half. Craig Stammen took over for the Nationals in the bottom of the inning, and retired the Mets in order in a nine-pitch bottom of the seventh.

• No. 23 For No.20: Mets' reliever Jon Rauch threw a 1-1 curve to Ian Desmond that ended up in the Party City Deck in left field. HR no. 23 of 2012 for the Nationals' shortstop. 2-0 lead for the Nationals after seven and a half after Rauch retired the next three batters. Ryan Mattheus took over in the bottom of the eighth, giving up a leadoff single by Jordany Valdespin but getting a 6-4-3 DP out of David Wright for outs no. 1 and 2 of the Mets' eighth. Scott Hairston ripped a sharp grounder to short with two down, but Ryan Zimmerman made a backhand stab and a throw to first to end the eighth.

• Burnett?: Nats' lefty Sean Burnett came on in the ninth after a few days off resting a sore elbow. The Nationals went down in order against the Mets' Frank Francisco in the top of the frame. Burnett gave up a leadoff single by Lucas Duda on the second pitch of the home ninth. Kelly Shoppach K'd swinging at an 0-2 fastball outside. ONE!!! Ike Davis got up 3-0, but Burnett got two called strikes and a groundout to first for out no.2. Andres Torres lined to left to put runners on the corners with one down and Nats' skipper Davey Johnson made the call to the pen for Drew Storen. STOREN WARNING!!! Nats' right-hander Drew Storen came on looking for his second save of 2012. Daniel Murphy lined to center to end it. Ball game!!! Save no.2 of 2012. Washington wins 2-0 to sweep the New York Mets and finish the season series with New York 14-4. 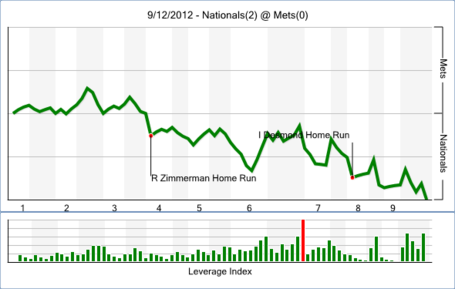