• "If it wasn't for that MEDLEN kid!!!!" - Scooby Doo villain: Since moving into the Atlanta Braves' rotation on July 31st, 26-year-old right-hander Kris Medlen has posted a 0.81 ERA with seven walks (1.13 BB/9) and 53 Ks (8.57 K/9) in eight starts and 55.2 IP. Last time out against Washington, the '06 Braves' 10th Round pick, who had Tommy John surgery in 2010, held the Nationals scoreless over 7.0 IP in which he walked one batter and allowed seven hits. Going back to two relief appearances against the Nats on July 20-21st, the fourth-year pro had a streak of 10.0 scoreless innings going against Washington before tonight's outing in Turner Field. The Braves hadn't lost a game that Medlen started since May 23, 2010, taking 19 straight decisions overall, and eight-straight since he returned to the rotation this season.

• 11.0: Medlen gave up a one-out single to center by Bryce Harper on a soft line drive, but the Braves' starter struck out Jayson Werth and he got Zimmerman, too, so he had to get through Adam LaRoche to get out of the first inning. Medlen "missed " with a high 1-2 heater that home plate ump Tim Timmons called a ball, but he got the Nationals' first baseman swinging with an 82 mph 2-2 change as he struck out the side on 22 pitches and completed his 11th straight scoreless inning pitched against the Nats. Martin Prado and Jason Heyward hit back-to-back opposite field singles of Ross Detwiler in the Braves' first, but the Nationals got a force at second on a grounder to Danny Espinosa off Chipper Jones' bat, and Detwiler got a fly to left from Freddie Freeman to end a scoreless first after 15 pitches. 0-0 in Turner Field.

• Medlen Is Filthy: A first pitch curve got a grounder to short out of Ian Desmond and a 1-2 two-seamer got Kris Medlen his fourth K in 1.2 IP. Six pitches and a 2-2 two-seamer to Roger Bernadina later, the Braves' starter had 5 Ks, 2.0 scoreless tonight and 12.0 overall against Atlanta's NL East rivals from D.C.. The 11-pitch inning had Medlen at 33 pitches overall. Ross Detwiler retired the first two Braves on seven pitches with Dan Uggla flying to center and David Ross striking out to start the home half of the second, but Andrelton Simmons singled to center with two down for the Braves' third hit off the Nationals' left-hander, who struck the opposing pitcher to end his second scoreless inning after 14 pitches.

• Pray-Dough: Reed Jackson caught a smoked line drive to center off Kurt Suzuki's bat on the warning track for the first out of the third. Ross Detwiler watched an 0-2 fastball all the way in for out no.2 and Medlen's 6th K, but Jayson Werth doubled by third with two down and Bryce Harper took a two-out walk to put two on in front of Ryan Zimmerman. Two on, two out, but the Nationals' third baseman grounded sharply to his counterpart at third and Chipper Jones made a diving play and a throw to second to get the force for out no.3 and 13.0 scoreless for Medlen vs the Nats. Martin Prado ripped a line drive to first that bounced just inside the line for a one-out double a fan interfered with. Double no. 38 for Prado, who was 2 for 2 tonight and 13 for 21 overall vs Detwiler in his career after the hit. Ian Desmond charged a weak grounder toward second and threw to first a step ahead of a sprinting Jason Heyward for out no.2 and Chipper Jones K'd on a check-swing strike three, unable to hold up on a 2-2 slider from Detwiler. 14-pitch 3rd. 0-0 after 3.0.

• Fret-E: Adam LaRoche took an 0-1 fastball from Medlen to right for a leadoff single in the top of the fourth. Ian Desmond K'd looking at a 2-2 fastball in the next AB. 7 Ks for Medlen through 3.1 IP. K no.8 came on another fastball inside to Danny Espinosa, who was surprised again. A 1-2 two-seamer inside got Roger Bernadina looking and Medlen had 9 Ks in 4.0 scoreless and 14.0 in a row against the Nats without a run allowed. 64 pitches after four. After a 10-pitch at bat, Freddie Freeman hit a leadoff double (no.31) to left over Bernadina's head to start the bottom of the fourth with another opposite field hit off the Nats' left-handed starter. Detwiler walked Dan Uggla to put two on with no one out. David Ross grounded to first and into a force at second in the next at bat, and Ian Desmond, knowing he had no chance at a double play, faked a throw to first and threw to third almost catching Freddie Freeman off guard and too far rounding third. Zimmerman applied the tag, but the Braves' first baseman got back in. First and third for Atlanta with one out, and a fly to right off Andrelton Simmons' bat brought Freeman in to make it 1-0 Atlanta in the fourth at Turner Field.

• Out Of My Brain On The 5.0/15.0: Kurt Suzuki flew to left on the first pitch of the fifth. Detwiler K'd looking for the 7th backwards Ks out of 10 total by Medlen. A grounder to third by Jayson Werth ended an eight pitch inning and Medlen's 5th scoreless tonight. 15.0 overall vs D.C.. 1-0 Atlanta after four and a half. Ross Detwiler broke Reed Johnson's bat with a 1-2 slider on the seventh pitch of the first at bat of the Braves' fifth, but Johnson singled on the pitch on a blooper to left. Martin Prado was 2 for 3 tonight after he popped out for the first out of the inning. Roger Bernadina was in consideral pain after he went shoulder first into the wall at full speed to make a leaping catch on yet another opposite field line drive off Jason Heyward's bat. [CHOMP!] Shark got another one, but it hurt. He stayed in. Chipper Jones singled to center in the next at bat to put two on for Freddie Freeman, but a weak grounder to first by the Braves' first baseman ended the fifth. Still 1-0 Braves. A 16-pitch inning had Detwiler at 86 after 5.0.

• #RUNHARP!!!: Kris Medlen's scoreless inning streak against the Nationals ended at 15.0 on the first pitch of the sixth when 19-year-old Nats' outfielder Bryce Harper took the right-hander deep to left for an opposite field blast that tied the game at 1-1 in the sixth. 390 ft or so the other way. First HR hit by a lefty off Medlen this season. Seven pitches later Medlen was through an eight-pitch inning with the game tied after five and a half. A fly to left, swinging K and grounder to short ended a quick eight-pitch sixth for Ross Detwiler, who had 5 Ks to Medlen's 11 after 6.0 IP. 1-1 in Atlanta.

• FIREWORKS!!!: Kris Medlen gave up a two-out single by Kurt Suzuki, but he got Corey Brown swinging to end a 16-pitch 7th with the Braves' right-hander's career-high 13th K. 7.0 IP. Ryan Mattheus took over for the Nationals in the bottom of the seventh. Michael Bourn hit for Medlen to start the frame, lining out to Roger Bernadina in left for the first out of the inning. Medlen's line: 7.0 IP, 5H, 1 R, 1 ER, 1 BB, 13 Ks, 96 P, 66 S, 4/3 GO/FO. After Mattheus retired Bourn for the first out of the seventh, he walked pinch hitter Jose Constanza to put a runner on with one down. Constanza got thrown out by Kurt Suzuki for the second out of the frame, but Martin Prado reached safely on a grounder to short that left him 3 for 4 on the night. Davey Johnson went to the pen for Michael Gonzalez, and the Nationals' left-hander struck Jason Heyward out to end the seventh with the score still tied at 1-1.

• Pen vs Pen: Eric O'Flaherty threw a 12-pitch, 1-2-3 top of the eighth for Atlanta. Michael Gonzalez came back out for the bottom of the frame, retiring the first two batters before Drew Storen came on to face the Braves' right-handed batter Dan Uggla. Storen popped the Braves' infielder up with a 95 mph 1-1 fastball to keep it tied at 1-1 after eight in Turner Field. Craig Kimbrel took over for Atlanta in the top of the ninth and got Adam LaRoche swinging with an 0-2 slider that bounced in front of home for out and K no.1. A 98 mph 0-2 fastball got Ian Desmond swinging. A 1-2 fastball outside to Danny Espinosa blew the Nats' infielder away. Kimbrel struck out the side on 10 pitches. Storen came back out for the bottom of the inning. When the Braves sent a left-handed batter out, Davey Johnson went to the pen for Sean Burnett. The Braves burned Lyle Overbay to bring Jeff Baker up. Grounder. Desmond. Out. One down in Atlanta's ninth. Andrelton Simmons grounded to short and too deep in the hole for Ian Desmond to make a play. Michael Bourn lined to right to send Simmons around to third with one down. Tyler Pastornicky stepped in with one down and grounded to short, but Ian Desmond threw it by Kurt Suzuki at home. Ballgame. Simmons scores to win it. 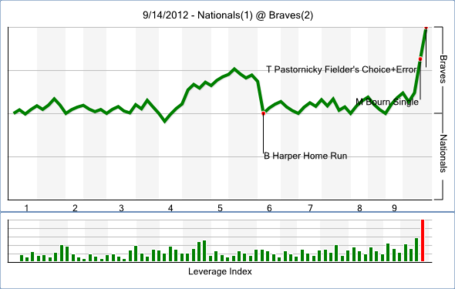