• Slide/Stop™: Jayson Werth did his trademark slide/stop™ after aggressively rounding first on the leadoff single off Braves' right-hander Tommy Hanson that started the second game of three for the Washington Nationals in Atlanta, Georgia's Turner Field. Werth stole second as Bryce Harper K'd swinging at breaking ball from Hanson. Ryan Zimmerman K'd looking for out no.2, taking a 3-1 fastball for a called strike he didn't like, and once again it was up to Adam LaRoche, who once again came through! The Nats' 1B took an 0-1 curve from Hanson to right and over Braves' right fielder Jason Heyward and the right field wall for a two-out, two-run blast and a 2-0 Nationals' lead in the top of the first. No. 30 of 2012 for LaRoche, who collected his third hit in 17 at bats against Hanson. 21 pitch first for the Braves' starter. Edwin Jackson walked Martin Prado with one down in the bottom of the first this afternoon, then popped Jason Heyward up and retired Brian McCann on a groundout to first to end a 13-pitch inning against Atlanta.

• Es Hurt Braves: Tommy Hanson issued his first walk of the game to Jesus Flores with one out in the second, then had a series of errors cause his all sorts of trouble. Steve Lombardozzi grounded to first in the next AB, but Freddie Freeman bobbled it as he looked to throw to second, then failed to beat Lombardozzi to the first base bag. Two on, 1 out. Error on Freeman. Edwin Jackson tried to bunt the runners over, and then the second error of the inning occurred when Hanson rushed a throw to first and sent it by first and out to right field. Jesus Flores scored on that E. Jason Heyward picked the ball up in right, but held it and when he did, Lombardozzi, who'd stopped at third, broke for home and beat the throw and avoided Brian McCann's tag. 4-0 Nats. A 29-pitch second had Hanson at 50 after 2.0.

• DaRn Uggla!!!: Freddie Freeman started Atlanta's second with a triple on a grounder over the first base bag that made it all the way to the right field corner. An RBI double by Dan Uggla followed to drive Freeman in on the Braves' second baseman's first hit in 14 career AB's vs E-Jax. 4-1 game. Jackson got Juan Francisco swinging for out no.1. Uggla took third when Andrelton Simmons K'd swinging at a pitch in the dirt and had to be thrown out, but Uggla was stranded there when Hanson grounded out to end the second. A 19-pitch second for E-Jax, leaves him at 32 pitches after 2.0 IP in Atlanta's Turner Field.

• Late Afternoon Sun: Ian Desmond "doubled" with two down in the Nats' third when Jason Heyward lost a line drive to right in the sun and failed to make what should have been an easy catch. Double no. 30 of 2012 is gifted to Desmond by the late afternoon sun. A wild pitch with Danny Espinosa up let Desmond take third, but Espinosa K'd for the second time today and the sixth time in six at bats to start the series with the Braves. Desmond's stranded. 4-1 Washington after two and a half. Edwin Jackson retired the top of the Braves' order in order in an eight-pitch bottom of the third that had the Nats' right-hander at 40 pitches overall and up 4-1. Steve Lombardozzi singled to center with one down in the fourth for a hit in his second at bat after he'd reached on an error the first time up. E-Jax K'd trying to bunt Lombardozzi over, and Lombo got thrown out trying to steal second. One-out single wasted. Edwin Jackson threw a fastball by David Ross for the first out of the Braves' fourth inning, but gave up a home run by Freddie Freeman on the first pitch of the second at bat of the frame. No. 20 of 2012 for Freeman, who hit 21 last season. Two outs later it was a 4-2 game after four in Atlanta.

• Bullpen Battle On: Werth, Harper and Zimmerman went down in order in a quick, 11-pitch top of the fifth by Tommy Hanson, who was at 85 pitches after 5.0 IP. Jose Constanza hit for Hanson with one down in the Braves' fifth, ending the right-hander's night after 5.0 IP, 4 H, 4 R, 2 ER, 1 BB, 7 Ks, 85 P, 54 S, 3/6 GO/FO. Or more accurately, Constanza K'd looking at a full-count slider that was called strike three for Jackson's second strikeout and the Nats' starter got Michael Bourn to chase a 2-2 slider into the dirt for the third-straight K and E-Jax' 6th strikeout in 5.0 IP. 4-2 Nats. ATL left-hander Jonny Venters retired Adam LaRoche on a fly to left on an 0-1 sinker. Ian Desmond grounded out to short and Danny Espinosa was 0 for 7 in the series with 7 Ks after he went down swinging to end the top of the sixth.

• Boo This Ump!!!: Adam LaRoche got into a heated argument with first base ump Marvin Hudson after the umpire ruled that LaRoche came off the bag while catching a throw from the pitcher on a grounder back to the mound and off E-Jax' glove that Jackson still managed to play. A rushed throw made it close and LaRoche had to stretch, but he stayed on the bag. The pitcher was charged with an error. Nats' skipper Davey Johnson blew up and got tossed for the first time this season arguing on the behalf of his first baseman. Jason Heyward hit a two-run home run to right-center in the next at bat and E-Jax was staring down the first base ump from the mound after surrendering the blast. 4-4 in Turner Field after Heyward's 27th. After Jackson struck David Ross out he was lifted. 5.1 IP, 4 H, 4 R, 3 ER, 1 BB, 7 Ks, 2 HRs, 86 P, 57 S, 8/0 GO/FO. Freeman picked up the one-out single to leave him a double short of the cycle, but Dan Uggla flew to center for out no.2. Chipper Jones made a pinch hit appearance to the roaring approval of the Turner Field crowd, but flew out to right to end the sixth.

• Leadoff Walks Rarely Come Back...: Jonny Venters retired the first two Nats in the seventh before pinch hitter Mark DeRosa singled to center. Braves' skipper Fredi Gonzalez went to the pen for left-hander Peter Moylan, with Jayson Werth up. Roger Bernadina came on to run for DeRosa. Werth singled with Bernadina running and there were runners on the corners with two down and Bryce Harper up. Luis Avilan came on for Atlanta and got a force at second on the first pitch he threw. 4-4 after six and a half. Christian Garcia issued a leadoff walk to Andrelton Simmons in the Braves' seventh. Tyler Pastornicky bunted succesfully with two strikes, moving Simmons to second with one down. Michael Bourn walked with one down to put two on for Martin Prado. Simmons tagged and took third on a fly out to Harper. Michael Gonzalez came on with Heyward up. 2 on, 2 out. Heyward and Gonzalez went to a full count, but the Nats' lefty battled back from a 3-0 count to strike the Braves' slugger out. 4-4 after eight.

• FIREWORKS?!?!?!: Ryan Zimmerman lined out to short on a one-hopper to Andrelton Simmons and Adam LaRoche and Ian Desmond followed with a flyout to center and a groundout to second, respectively in a five-pitch, 1-2-3 8th by Braves' lefty Eric O'Flaherty. Ryan Mattheus took over for Washington and gave up a leadoff single by David Ross and a one-out walk to Dan Uggla. Pinch runner Jeff Baker took over at second. Ryan Mattheus vs Chipper Jones. 2 on, 1 out. Jones took base-loading walk in front of Andrelton Simmons. A fastball inside from the Nats' reliever caught Simmons' jersey and a HBP made it a 5-4 game. Zach Duke vs Reed Johnson. Johnson K'd swinging for out no.2 and Michael Bourn grounded to first to end the eighth. 5-4 Atlanta.

• Kimbrel'd: Craig Kimbrel entered the game in the top of the ninth looking for save no. 36 of 2012. Danny Espinosa took a 3-1 pitch for a called strike, then K'd swinging at the full-count pitch. 0 for 8, 8 Ks. Chad Tracy singled with one down and was replaced on the basepaths by Eury Perez. Perez stole second with Steve Lombardozzi up, and took third on a throwing error by the third Braves' catcher of the game, J.C. Boscan. Lombardozzi K'd swinging for out no.2 Runner on third with two down for Tyler Moore. Swinging K. Ballgame. Kimbrel strikes out the side and take two-straight from the Nationals. 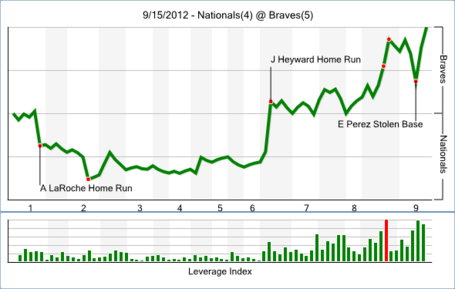