• [Cheers For Chipper]: Ryan Zimmerman singled with two down in the top of the first tonight in Atlanta, but Braves' lefty Mike Minor busted Adam LaRoche in on the fists and popped the Washington Nationals' first baseman up to end an 11-pitch scoreless first in the finale of the three-game series in Turner Field. Braves' center fielder Michael Bourn singled on an 0-2 fastball from Gio Gonzalez for a leadoff hit in the home-half of the frame. Reed Johnson fouled off four two-strike pitches before lining out to right in a 10-pitch at bat against the Nationals' left-handed starter. Bourn moved into scoring position on a groundout to second by Jason Heyward, bringing Chipper Jones to the plate to the sort of wild ovation that greets each of his ABs these days, but the 40-year-old, 19-year veteran grounded out to short. Grounder. Desmond. Out. And a 21-pitch first for Gio Gonzalez.

• 50 In 2.0: An 83 mph changeup and a 91 mph fastball got Braves' lefty Mike Minor the first two outs of the second inning as Ian Desmond and Danny Espinosa went down in order. Tyler Moore slowed things down some with a seven-pitch, two-out walk, but Minor got a groundout to short from Kurt Suzuki to end a 12-pitch frame and 2.0 scoreless after 23 pitches overall. Gio Gonzalez "missed" with a 2-2 bender to Freddie Freeman, but dropped another one in for a called strike three on the full-count pitch to the Braves' first baseman. Gonzalez missed with an 80 mph full-count curve to Dan Uggla and walked the second baseman in a nine-pitch at bat before retiring shortstop Andrelton Simmons and the opposing pitcher in what ended up a 29-pitch frame. 50 pitches overall in 2.0 scoreless IP.

• Minor Shows Off Efficiency: Gio Gonzalez K'd swinging trying to hit the second career MLB home run. Jayson Werth bent over at the hips at the plate in an exaggerated protest of a 1-2 heater outside that was called strike three for the second out of the third by home plate ump Marvin Hudson. When Mike Minor popped Bryce Harper up to left with an 0-2 fastball he was through 3.0 scoreless on 38 pitches.

• Braves Take Lead: 58 pitches into his 30th start of 2012, Gio Gonzalez walked Michael Bourn to put the leadoff man on in Atlanta's third. Reed Johnson hit a low-liner to short four out no.1. Bourn faked like he was taking off, broke back toward first on contact avoiding a sharp grounder and was still able to go first-to-third on a one-out single to right by Jason Heyward. When Chipper Jones worked the count full in the next at bat, Gio Gonzalez was up to 71 pitches. When Chipper finally singled to left-center to drive a run in the Nats' lefty was at 73 pitches and down 1-0 with runners once again on first and third. A sac fly to left by Freddie Freeman that scored Heyward from third made it 2-0 and pushed Gonzalez up to 79 pitches overall in 2.2 IP. Four fastballs later Gonzalez was through a 33-pitch 3rd at 81 overall.

• Espinosa's Struggling: Ryan Zimmerman was 2 for 2 after an opposite field single to right off of Minor. Braves' first baseman Freddie Freeman made his way to the tarp down the right side line and fell back onto the grass in foul territory as he caught a pop off Adam LaRoche's bat for the first out of the fourth and Danny Espinosa followed up on a one-out single to left by Ian Desmond with a grounder to short that started an inning-ending 6-4-3 after which Minor was at 48 pitches in 4.0 IP. David Ross flew to right on the third pitch of the Braves' fourth. One pitch to Andrelton SImmons got Gio Gonzalez out no.2. The opposing pitcher K'd swinging at a 2-2 fastball to end a nine-pitch frame that had Gonzalez at 92 pitches after 4.0 IP.

• Harper Double no.22: Kurt Suzuki drew a one-out walk in the Nationals' fifth. Gio Gonzalez bunted his catcher over. Jayson Werth worked the count full to push Minor up to 55 pitches, but grounded out to second to end a 19-pitch inning and the Braves' lefty's fifth scoreless frame. Michael Bourn K'd swinging at a full-count fastball up high on Gio Gonzalez's 99th pitch of the night. Four pitches and two outs later the Nats' starter was through 5.0 IP on 103 pitches. Bryce Harper hit an opposite field, ground-run double to left-center on a 2-2 fastball from Minor in the Nationals' sixth. Double no.22 of 2012 for the 19-year-old outfielder. Harper took third when Adam LaRoche grounded to second for the second out of the inning, and scored the Nats' first run when Ian Desmond came through with a two-out single to center on a 1-2 fastball from Minor. 2-1 Braves, but Desmond got picked off first for the third out of the inning.

• Larry's Stranded: Chipper Jones walked in a five-pitch at bat against Gio Gonzalez. The Nats' left-hander's 110th pitch of the night landed on the warning track in right on a fly ball off Freddie Freeman's bat that got over Jayson Werth's head, but not deep enough to clear the wall. Jones had to wait to see if Werth caught it, so he only got to third on the double that ended Gonzalez's night. Craig Stammen struggled to throw strikes in a steady rain, but he popped Dan Uggla up for out no.1. Braves' catcher David Ross chased an 0-2 pitch in the dirt for the second unproductive out and Andrelton Simmons' groundout to second end the sixth without the Braves scoring a run. 2-1 Atlanta after six.

• E:5: Braves' right-hander Cory Gearrin needed 10 pitches to retire the Nationals in order in the top of the seventh. Craig Stammen gave up a one-out walk to Michael Bourn in his second inning in relief of Gio Gonzalez. A sharp grounder to third off Reed Johnson's bat ate up Ryan Zimmerman, and the Nats' third baseman lost the ball allowing Bourn to take third. Nationals' manager Davey Johnson went to Sean Burnett with runners on first and third, and Bourn scored on a grounder to first by Jason Heyward when Adam LaRoche stepped on first before throwing home a step late to get the speedy Braves' outfielder. 3-1. Braves. A walk to Chipper Jones and a HBP on Freddie Freeman loaded the bases with two down and a Dan Uggla single through short made it 5-1 before the final out of the inning was recorded.

• Swept Away: Pinch hitter Mark DeRosa, right fielder Jayson Werth and center fielder Bryce Harper went down in order in a 12-pitch inning by Luis Avilan. Drew Storen retired the Braves in order in an eight-pitch, 1-2-3 bottom of the inning. The Braves turned to Chad Durbin got a line drive to short from Ryan Zimmerman for out no.1. Adam LaRoche kept hope alive with a one-out single to right. Ian Desmond popped out foul of first for out no.2. Steve Lombardozzi K'd swinging to end it. Ballgame. Sweep. Back to D.C. on Tuesday. 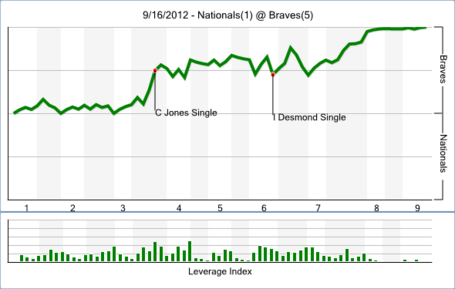