• #Lannimal: Game two of two tonight started with Los Angeles Dodgers' infielder Mark Ellis lining out to Ian Desmond at short on a 2-2 two-seamer from Washington Nationals' lefty John Lannan. Shane Victorino lined to center on a first pitch fastball in the second AB, doubling for the 26th time in 2012. Lannan looked Shane-O back to second and threw to first when Matt Kemp grounded back to the mound for out no.2. Nats' second baseman Steve Lombardozzi threw from behind the second base bag on a grounder up the middle off Adrian Gonzalez's bat that ended a scoreless 14-pitch 1st in Lannan's 4th start of 2012. 0-0 in D.C. Jayson Werth and Bryce Harper sent groundouts to short to start the home-half of the frame. Ryan Zimmerman grounded to Luis Cruz at third to end a 12-pitch inning by the Dodgers' Josh Beckett. 0-0 after one.

• Cruz Is In To Second: Luis Cruz hit his third double of the night to right field with two down in LA's second, after John Lannan struck Hanley Ramirez out to start the frame and got a line drive to second from Andre Ethier for out no.2. Backup Dodgers' backstop Matt Treanor's groundout to Steve Lombardozzi ended Lannan's second scoreless with the lefty at 26 pitches after a 12-pitch inning vs LA. Adam LaRoche ripped a leadoff single through the right side on a hanging bender from Beckett, but he was erased on a 4-6-3 DP off Michael Morse's bat. A fly to left by Ian Desmond ended a 10-pitch frame by the Dodgers' starter, who was in control on the mound at the start...

• Grounder. Desmond. Out.: The opposing pitcher rolled one out to short for the first out of the Dodgers' third. Mark Ellis singled to center for the LA's third hit. One out later, Lannan issued back-to-back walks to Matt Kemp and Adrian Gonzalez to load the bases for Hanley Ramirez. Lannan got behind Ramirez too, and gave up a two-out, two-run opposite field single that gave Los Angeles a 2-0 lead early in the nightcap of the doubleheader in D.C. Andre Ethier followed with an RBI single in the next at bat and it was 3-0 Dodgers before Lannan escaped the third. A 31-pitch inning had Lannan at 57 pitches after three. After a 10-pitch, 1-2-3 bottom of the third inning, Josh Beckett was at 32 pitches overall, and up 3-0.

• Bad Lannan: Matt Treanor singled to start the fourth and took second on a sac bunt before the Dodgers' catcher moved to third on a groundout by Mark Ellis. A HBP on Shane Victorino put runners on the corners for Matt Kemp, whose single to left brought Treanor in to make it a 4-0 Dodgers' lead. Steve Lombardozzi knocked down an infield single by Adrian Gonzalez that loaded the bases and ended John Lannan's night. Chien-Ming Wang threw a wild one on his first pitch of the night, allowing Victorino to score from third. Hanley Ramirez grounded to third in the next at bat and Ryan Zimmerman knocked it down, recovered and tagged Adrian Gonzalez as the Dodgers' infielder leapt and tried to reach third, and Zim made the play before Matt Kemp crossed the plate. 5-0 instead of 6-0? Nope. Umps blow the call. 6-0 Dodgers after three and a half. Jayson Werth, Bryce Harper and Ryan Zimmerman went down in order in an 8-pitch bottom of the inning after which Beckett had a one-hitter going through four.

• CMW: Andre Ethier and Luis Cruz hit back-to-back singles off Chien-Ming Wang to start the fifth. Both runners advanced into scoring position on a swinging bunt by Matt Treanor. Josh Beckett hit a chopper to third for out no.2 and Mark Ellis grounded to first to strand both runners in a 12-pitch inning by Wang. Adam LaRoche and Michael Morse saw a total of three pitches as they were retired for the first two outs of the Nats' fifth, and Ian Desmond flew to left to end a seven-pitch frame at 47 pitches overall after 5.0 IP. Bryce Harper tracked a fly to center off Shane Victorino's bat back into deep center and made an over-the-shoulder catch for the first out of the sixth. Chien-Ming Wang threw 17 pitches total in a scoreless 1-2-3 top of the sixth. Corey Brown doubled with two down in the Nationals' half, but Jayson Werth flew to left to end Beckett's sixth scoreless.

• Comeback?: Hanley Ramirez lined to Bryce Harper in center. Andre Ethier grounded back to the mound. Luis Cruz flew to left in a 13-pitch 1-2-3 seventh by Zach Duke. Josh Beckett needed just seven pitches to retire the Nationals in order in the bottom of the frame, completing his seventh scoreless on 68 pitches overall. Matt Treanor singled off Zach Duke on the first pitch of the eighth, but the Nats' lefty retired the next three Dodgers in order in an 11-pitch frame. Michael Morse started the home-half of the frame with an opposite field blast!! Over the right field wall for a solo HR, Morse's 14th. Ian Desmond singled in the next at bat to bring Steve Lombardozzi to the plate and LOMBO WENT YARD TOO!!! 2-run HR for Lombardozzi's 3rd of 2012. 6-3 game all-of-a-sudden. One out later, Corey Brown reached second on a grounder to Adrian Gonzalez that the Dodgers' first baseman blew. Four hits for the Nats. Beckett's done.

Davey Johnson brought Mark DeRosa on to face LA lefty Randy Choate, who surrendered a single to right that put runners on the corners. Bryce Harper vs Randy Choate: 2 on, 1 out. 6-3 LA. Harper got ahead 2-0 and hit a 2-1 sinker toward third for an RBI infield single that brought Brown in from third to make it 6-4. Ronald Belisario vs Danny Espinosa. Runners on first and second with one out. Single to left. Bases loaded. Tyler Moore K'd swinging at a 2-2 sinker from Belisario. Michael Morse, who homered to start the inning, grounded through the right side to bring two runs in and tie it at 6-6. Steve Lombardozzi, who homered the last time up... grounded back to the mound to end the eighth. 6-6 game in D.C.

• Stupid Early Blown Call: Nats' closer Tyler Clippard came on to pitch the top of the ninth against LA. An 0-2 fastball to Matt Kemp... was crushed. Solo HR to the Red Porch seats in center. 7-6 Dodgers. That blown call earlier in the game really hurts now. Adrian Gonzalez singled to center in the next at bat, Andre Ethier K'd swinging and Luis Cruz popped up to short to end the top of the ninth. Brandon League took over for LA. Jesus Flores grounded to second. One down. Corey Brown K'd swinging at a full-count fastball. Mark DeRosa grounded to third. Ballgame. 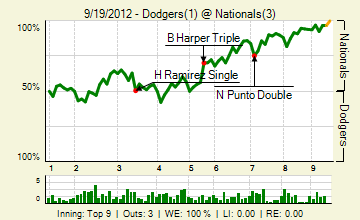 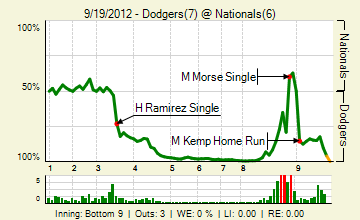