If Los Angeles Dodgers' outfielder Matt Kemp had simply put his head down and sprinted home he might have crossed the plate before Ryan Zimmerman managed to tag a leaping Adrian Gonzalez for the final out of the fourth inning in the second game of last night's doubleheader. If Adrian Gonzalez had simply stayed at second, as was probably advisable on a grounder to third with runners on second and third, then Kemp would have scored the third run of the inning to make it 6-0 and no controversy would have existed.

But instead, Hanley Ramirez grounded to third with two down and two runners in scoring position and as Matt Kemp trotted home, looking back to watch the play at third, Zimmerman tagged A-Gon in the unmentionables and did so before Kemp crossed the plate. 3 outs. No sixth run, right? Wrong. The umpires seemingly didn't even realize there was a call to be made until LA skipper Don Mattingly came out to make sure the run Kemp scored counted. It shouldn't have counted, but it did. 6-0 Dodgers in a game LA eventually won 7-6 on the Kemp home run off Tyler Clippard that followed the Nats' eighth inning rally.

"In my mind," Davey Johnson said after the game, "[Adrian Gonzalez] was already out. And they obviously blew the call. It wasn't reviewable, and they all discussed it, and evidently nobody was paying attention. Kemp wasn't running. Just wasn't running and the tag play was before. They obviously missed it, but you'd think when the three of them got together somebody would have been paying attention that Kemp was not at home."

They weren't, they couldn't review it. The umps blew it...

It wasn't even close. If Zim makes the tag here, which he did, the run doesn't count: (screencap from MLB.com/KCAL9): 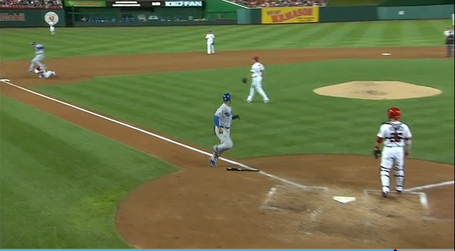 "There's nothing I could do," the Nats' skipper continued, "I raised a fuss. I said he wasn't at the plate, 'You obviously didn't see it,' and the umpire chief came over I said, 'It's terrible you guys missed that, you better look on the replay and see how three of you missed it.' I can understand third base umpire looking at the tag. But yeah..."

The Dodgers got the sixth run. The Nationals rallied to tie it. Matt Kemp's HR won it. 7-6 final. It ended up being a huge run. "They're all huge runs," Davey Johnson corrected a reporter last night, "I'm not out there for my health. I don't come out unless I think I have a legitimate beef." He had a beef. Links and lots of them... RIGHT NOW!!!:

• "From the Nationals' dugout, from the field, from the pressbox, and certainly from the replay, that [Matt] Kemp did not touch home plate before [Ryan] Zimmerman tagged [Adrian] Gonzalez." - "Matt Kemp was called safe at home with an important sixth run Wednesday night, but he shouldn't have been" - Amanda Comak, Washington Times

• "'At the time, you don't think it's a big play. You just can't give away runs in the big leagues,' [Ryan] Zimmerman said." - "Disputed Dodgers run looms large in end for Nats" - Bill Ladson, nationals.com: News

• "During the Nationals dramatic six-run rally in the eighth inning of the second game, [Danny] Espinosa pinch-hit and singled to left field." - "Sorting out the Nationals’ doubleheader and all that happened" - James Wagner, Washington Post

• "When Ryan Zimmerman placed a tag on Adrian Gonzalez for the third out of the inning, [Matt] Kemp was still a good distance away from Flores and home plate." - "Nationals Pastime: Flores 'in shock,' Clippard says 'it's a tough one to swallow'" - Dan Kolko, MASNSports.com

• "His team down six runs in the second half of a doubleheader against the Dodgers, Davey Johnson pulled three of his biggest bats..." - "Postseason clincher is no cinch for Nationals" - Mark Zuckerman, CSNWashington.com

• "'The only thing that means anything to me is when we clinch the [division]. That's the only thing I'm concerned with,' [Davey] Johnson said." - "Los Angeles Dodgers at Washington Nationals - September 20, 2012" - Alex Angert, MLB.com Preview

• "'For the first couple inning, I was a little out of sync,' [Jordan] Zimmermann said. 'The last three innings, I felt much better and I was able to control everything.'" - "Jordan Zimmermann delivers a reassuring start in win over Dodgers" - Adam Kilgore, Washington Post

• "'He's playing great, as far as I'm concerned,' said Nationals manager Davey Johnson. 'But the results from the last time he did it were so good and he felt so much better.'" - "Ryan Zimmerman gets fourth cortisone shot of season in right shoulder" - Amanda Comak, Washington Times

• "The umpires didn't rule anything immediately after the play, and then only informed [Davey] Johnson that they were giving the Dodgers the run after Los Angeles manager Don Mattingly argued that Kemp had beat the tag." - "Nationals Pastime: Johnson talks blown call, comeback after Nats' 7-6 loss" - Dan Kolko, MASNSports.com

• "[John] Lannan excelled in his three previous starts because of his ability to attack the strike zone, get ahead in the count and induce groundballs." - "Instant analysis: Dodgers 7, Nats 6" - Mark Zuckerman, NatsInsider.com

• "Informed that he should not have scored, Kemp said: 'Actually, yeah, I don't think I did. But we got lucky right there. We stole a run.'" - "Dodgers beat Nationals 7-6 for split of DH" - Howard Fendrich, AP/WTOP.com

• "If the Nationals are to contend for a World Series title without ace pitcher Stephen Strasburg, then they need the Jordan Zimmermann of the season's first four months." - "Zimmermann solid in Game 1 win, but Nationals split doubleheader" - Brian McNally, WashingtonExaminer.com

• "It was all set up to be a storybook way for the Nats to clinch a playoff spot. Come back from a six-run deficit in the eighth and dramatically earn the win that locked it all up." - "Nationals Pastime: How's this for a comeback? (Nats lose 7-6)" - Dan Kolko, MASNSports.com

• "The Nationals had a chance to clinch a playoff berth on Wednesday night, but they lost to the Dodgers, 7-6, in the nightcap of their doubleheader at Nationals Park." - "Nats' Path to the Postseason: Sept. 20, 2012" - Bill Ladson, nationals.com: News

• "The Nationals nearly pulled off their latest, most incredible miracle before they lost, 7-6 in the nightcap of a doubleheader against the Los Angeles Dodgers." - "Nationals vs. Dodgers: Washington is one win from MLB playoff spot after doubleheader split" - Adam Kilgore, The Washington Post

• "Bryce Harper, their 19-year-old sparkplug, tripled for his 49th extra-base hit of the season, a major league record for teenagers, and scored what stood up as the winning run." - "Nats move to verge of playoff berth with 3-1 win over Dodgers" - Amanda Comak, Washington Times

• "Who says you need to come through with clutch hits to produce runs? The Nationals disproved that theory in this game, scoring all three of their runs on outs." - "Instant analysis: Nats 3, Dodgers 1" - Mark Zuckerman, NatsInsider.com

• "[Stephen] Strasburg is only in his third professional season. If good fortune accompanies the generational talent he has in his arm, he could earn as much as $300 million over his career." - "Thom Loverro: Still defending the shutdown of Nationals' Strasburg" - Thom Loverro, WashingtonExaminer.com

• "The Nationals won their 90th game, and it marked the seventh time that manager Davey Johnson guided a team to 90 victories in a season." - "Los Angeles Dodgers at Washington Nationals - September 19, 2012" - Bill Ladson, MLB.com WSH Recap

• "'I wanted to have an opportunity to see Chien-Ming,' [Davey] Johnson said. 'I thought he threw the ball well. For not having pitched, I thought he had good sink. He got a lot of ground balls.'" - "Chien-Ming Wang settles in after wild pitch to go 2 1/3 innings" - Byron Kerr, MASNSports.com

• "[Sean] Burnett pitched for about a month with discomfort in his left elbow, the same problem that surfaced shortly after the all-star break." - "Sean Burnett focused on execution, not health" - Adam Kilgore, Washington Post

• "It was Clippard's fifth loss of the season. Brandon League shut down the Nats in the ninth for his third save as a member of the Dodgers." - "Los Angeles Dodgers at Washington Nationals - September 19, 2012" - Bill Ladson, MLB.com WSH Recap

• Your Daily Message From The Dalai Lama On Twitter (@DalaiLama): "The creation of a more peaceful and happier society has to begin from the level of the individual."

• "'DC has always been a town where sports is currency. Going to a game isn’t just about being a fan, it’s an avenue to power and connections,' an online editorial summary explains." - "Morning pixels: ESPN the Mag’s D.C. issue" - Dan Steinberg, DC Sports Bog - The Washington Post

• "With a .290 average, 17 homers and 72 RBIs in 70 games at low Single-A Hagerstown, [Steven] Souza earned a promotion back to high Single-A Potomac and kept on going." - "Souza excels in full season, ready to make noise at instructional league" - Byron Kerr, MASNSports.com

• "The clear conspiracy surrounding one of the most flagrant injustices in sports has finally garnered some attention in the nation's capital." - "McCain 'outraged' over Teddy, Nats conspiracy (VIDEO)" - WTOP.com

• "As the Nationals move closer to a guaranteed spot in the playoffs, there's still no agreement in place about who will pay to keep subway trains running late if the games run past Metro's midnight closing time." - "Metro, city still talking about Nats' postseason rides" - WTOP.com

• "September 20, 1908 - 17 Nationals strike out in St. Louis at the hands of the Brown’s Rube Waddell. Walter Johnson is gallant as he tries to keep the Nats close, but the Browns win in 10 innings, 2-1." - "This Date in Washington Senators History – ’33 Senators clinch at the very least a tie for the AL crown" - Art Audley, D.C. Baseball History

• "The Nats brought the best record in baseball home to DC as they kicked off the season’s penultimate home stand with a doubleheader vs. the Dodgers Tuesday at Nationals Park." - "Teddy Roosevelt declares 'Argh!' after losing on Talk Like a Pirate Day" - Presidents Race Fan, Let Teddy Win!

• "The second game of tonight’s doubleheader between the Washington Nationals and Los Angeles Dodgers shows exactly why you should never leave a game early and why the Nats are in the position to clinch a playoff birth any day now." - "Nats Almost Make Miraculous Comeback And Umpires Make The News Again" - Joe Drugan, The Nats Blog

• "A chance at history" - Kristen, Win For Teddy

• Marlins: "The Marlins knew Atlanta’s Kris Medlen was the hottest thing going on the mound these days as the 26-year-old righty has been mowing down opponents for some time now." - "Kris Medlen’s masterful night for Atlanta Braves sinks Miami Marlins" - George Richards, MiamiHerald.com

• Mets: "Ryan Howard spoiled [Matt] Harvey’s shot at a final victory by smashing a two-run homer against Josh Edgin with two outs in the ninth inning, sending the Mets to their 10th loss in 11 games." - "Matt Harvey allows just one run, but New York Mets blow lead in the ninth inning and fall 3-2 to the Philadelphia Phillies Wednesday night at Citi Field" - Mike Puma, NYPOST.com

• Phillies: "Although he's played less than half a season, Ryan Howard is as mentally drained as any player in baseball." - "Ryan Howard lifts Phillies over Mets with 2-run blast" - Ryan Lawrence, Philly.com