• Clinched: With their 91st win of 2012 season tonight in Nationals Park, led by Ross Detwiler's strong start, Ryan Zimmerman's bat and Bryce Harper's speed, the Washington Nationals clinched the first postseason berth by a D.C.-based team since 1933 when the original Senators lost in their third trip to the World Series over a ten-year stretch. 79 years later, the Nationals will be the first team to bring the playoffs back to the nation's capital. Here's how they won the series finale with the Los Angeles Dodgers tonight to guarantee the return to the posteason...

• 1-2-3: Ross Detwiler threw a 94 mph 0-2 four-seamer by Mark Ellis for a swinging K in the first AB of the series finale of Washington's three-game set with the visiting Los Angeles Dodgers. After getting a groundout to short by Shane Victorino, the Nats' lefty started behind 1-0 before throwing three straight mid-90's fastballs by Matt Kemp to get a second swinging K and the third out of a 10-pitch opening frame. 0-0. Jayson Werth singled on a 1-1 sinker from Chris Capuano in the first at bat of the bottom of the inning then stole second two outs later after Bryce Harper and Ryan Zimmerman both failed to advance the runner. Adam LaRoche K'd looking at a 1-2 fastball outside though, and Capuano was through a 14-pitch first with Werth stranded at second.

• 1-2-3: Danny Espinosa fielded a grounder from Adrian Gonzalez and threw the Dodgers' first baseman out to end the first at bat of the second. Ross Detwiler followed three straight mid-90's fastballs with an 82 mph slider that bounced in front of the plate a half-second after Hanley Ramirez had finished swinging at the off speed stuff for out no.2. A groundout first by Andre Ethier ended a 10-pitch second by the Nationals' left-hander. Michael Morse and Ian Desmond hit back to back singles off Capuano in the home-half of the second, but Danny Espinosa, Kurt Suzuki and Detwiler went down in order with advance either runner. 0-0 after two.

• Harper Is Not Stopping, Bo: Luis Cruz flew out to right for the seventh out in a row to start vs the Nats' left-handed starter. Detwiler threw a 1-2 fastball by A.J. Ellis up high for out no.2 of the second, K no. 4 in 2.2 scoreless and the eighth straight batter retired to start the game A pop to Ryan Zimmerman off Chris Capuano's bat ended Detwiler's 3rd after 12 pitches with the 26-year-old left-hander at 32 pitches overall. Jayson Werth was 2 for 2 tonight after singling to left-center to start the Nationals' third. Adrian Gonzalez was fully-extended when he pulled a high hopper down and threw to second to get a force on a Bryce Harper grounder to first. Harper beat the throw back to first, however, and then scored when Ryan Zimmerman doubled to left center for his 33rd two-base hit of 2012. No chance Harper was stopping, and he scored from first. 1-0 Nationals. Zimmerman took third on an Adam LaRoche groundout then scored on a wild pitch that got through A.J. Ellis' legs. 2-0 Nats after 3.0 in D.C.

• No No-No: Three pitches into the fourth Ross Detwiler's no-hit bid ended when Mark Ellis homered to the left field bullpen to cut the Nationals' lead in half with one swing. 2-1 Nats after Ellis' 7th. Detwiler got Shane Victorino swinging for the 5th K in 3.1 IP. Matt Kemp popped up to second for out no. 2, but Adrian Gonzalez lined over short for a two-out single and the Dodgers' second hit off Detwiler before Hanley Ramirez's pop to second ended a 22-pitch 4th. Ian Desmond walked to start the Nats' fourth then scored on an RBI double by Danny Espinosa, who hit a sharp grounder by third and into left to drive in Washington's third run, 3-1. Espinosa took third on the throw home, and Kurt Suzuki battled for eight pitches in the next at bat before flying to right on a fastball from Capuano for an RBI sac fly and a 4-1 Nats' lead.

• ROE Then 1-6-3: A skimming grounder to third off Andre Ethier's bat ate Ryan Zimmerman up and put the leadoff runner on in the Dodgers' fifth. E:18 of 2012 for the Nats' third baseman. Ross Detwiler erased the runner on a grounder back to the mound when he started a 1-6-3 DP that ended with Adam LaRoche picking a bounced throw to first by Ian Desmond. A pop to first by A.J. Ellis ended the top of the frame after nine pitches from Ross Detwiler, who was through 5.0 IP on 63. Bryce Harper, Ryan Zimmerman and Adam LaRoche went down in order in the bottom of the frame. The 17-pitch inning had Capuano at 83 pitches, down 4-1 after 5.0 IP.

• Detwiler, Ross Detwiler: Ross Detwiler missed with a 2-2 fastball outside and walked pinch hitter Elian Herrera to start the Dodgers' sixth. Two outs later Matt Kemp stepped in with the runner still standing at first and hit one-hop grounder to short that Ian Desmond dove for but held onto. No play. First and second with two down, but Detwiler jammed Adrian Gonzalez severely and induced a weak grounder to first that ended the top of the sixth. The 19-pitch frame had Det at 82 pitches, up 4-1 after six in D.C. Dodgers' right-hander Jamey Wright gave up a one-out single by Ian Desmond, who stole his 18th base but was stranded at second at the end of the sixth. Still 4-1 Nats.

• Filthy: Christian Garcia replaced Ross Detwiler in the top of the seventh. Ryan Zimmerman stabbed a sharp grounder to third off Hanley Ramirez's bat and threw to first to get the first out of the frame. A 2-2 change got Andre Ethier swinging for out no.2 Luis Cruz K'd swinging at a 1-2 change to end a 15-pitch frame by the Nats' right-hander reliever. Dodgers' lefty Paco Rodriguez walked Jayson Werth with one down in the Nats' eighth. Rodriguez struck Bryce Harper out and was replaced on the mound by Kenley Jansen. Werth took second without a throw with Ryan Zimmerman at the plate, but Zim's grounder to second (via the Jansen's glove) ended the seventh.

• FIREWORKS!!!: A.J. Ellis grounded to third. Zim's got it. Stutter step and throw. On target. Bobby Abreu hit a one-out single to left for LA's fourth hit of the game. Mark Ellis battled but lined out to third. Out no.2. Shane Victorino popped to left. Three down. 4-1 after seven and a half. Randy Choate retired Adam LaRoche. Shawn Tolleson took over with Michael Morse due up. Swinging K. Ian Desmond K'd swinging too. On to the ninth.

• STOREN WARNING!!!!!: Drew Storen took the mound in the ninth looking for his third save of 2012. Matt Kemp took a 96 mph heater for strike one. Check swing strike three. Kemp worked the count full but K'd looking at a 95 mph two-seamer outsider. ONE!!!!! Adrian Gonzalez K'd swinging at a 1-2 change. TWO!!!! Hanley Ramirez took two sliders to go down 0-2 and K'd swinging at a slider to end it. Ballgame. Playoffs. Clinched. 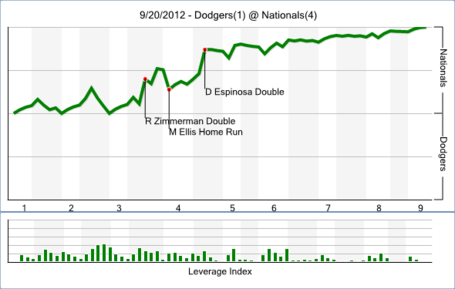