• 31sts: The Milwaukee Brewers' perennial MVP candidate, Ryan Braun, took a 96 mph fastball outside from Edwin Jackson the other way to right field, 334 ft from home and just inside the line in front of the 335 ft sign on the outfield wall for a two-out double, his 31st of 2012. Braun was stranded at second one out later, however, when Aramis Ramirez grounded out and E-Jax completed a scoreless 14-pitch first in Nats Park. Ryan Zimmerman singled with two down in the Nats' first, then scored the easy way on Adam LaRoche's 31st HR of 2012. The Nationals' first baseman flat crushed a 1-1 change from Brewers' right-hander Shaun Marcum and gave the Nationals a 2-0 lead after one with a towering blast that bounced off the back wall of Washington's bullpen.

• DestLucroyed: Three pitches into the second, Brewers' catcher Jonathan Lucroy cut the Nats' lead in half with one swing, taking an 0-2 slider from E-Jax to left for the backstop's 10th HR of 2012. The solo blast landed 20 rows back in the left field seats and made it 2-1 Nats. Not a good 0-2 pitch. 15 pitches later Jackson had an 18-pitch second in the books and a 2-1 lead on the scoreboard. Aramis Ramirez made a strong throw from third that arrived at first in time to get Jesus Flores for the third out of a 15-pitch, 1-2-3 2nd by Shaun Marcum. Two weak grounders, one to the mound and one to first, and a fly to center by Rickie Weeks ended Edwin Jackson's third after 11-pitches with the 29-year-old right-hander at 43 pitches overall. E-Jax showed off his speed in the bottom of the inning, grounding to Brewers' shortstop Jean Segura and hustling down the line for a leadoff infield single. Jayson Werth battled Marcum for six pitches, but K'd chasing a 1-2 slider outside. Bryce Harper got the greenlight on a 3-0 pitch, but popped it up for out no.2 and Ryan Zimmerman grounded weakly to first to end the third. 2-1 Nats after three in D.C.

• DON'T RUN ON HARP!!!: Ryan Braun doubled to right-center and over Bryce Harper's head on a 2-1 slider, bouncing his 32nd two-base hit of the year off the out-of-town scoreboard in right where Harper retrieved it. Braun then tried to score from second on a single by Aramis Ramirez in the next at bat, but Harper came up throwing and sent a one-hop laser to Nats' catcher Jesus Flores that beat Braun home by at least two steps. Flores blocked the plate and made the tag for the first out of the inning and Harper's 8th OF assist of the year. Ramirez took second on the play, but didn't bother trying to score when Jonathan Lucroy hit a grounder up the middle in the next AB. First and third with one down, but Travis Ishikawa grounded back to the mound on a first-pitch fastball from E-Jax, and the Nats' pitcher wisely let it go so Danny Espinosa, Ian Desmond and Adam LaRoche could turn a slick inning-ending 4-6-3 to get Jackson through a long fourth. Just seemed long I guess. 12 pitches by E-Jax. Michael Morse went back up the middle with a one-out single in the Nationals' fourth. Two outs later he was stranded on the basepaths after Ian Desmond and Danny Espinosa both popped out to the left side of the infield. 17-pitch inning for Marcum, who was at 68 pitches after four.

• Rolling Through Six: A grounder to third by Carlos Gomez, a grounder to second by Jean Segura and a swinging K from the opposing pitcher ended a quick nine-pitch 5th by Edwin Jackson. After collecting his fourth K in 5.0 IP, E-Jax went down looking for the second out of the bottom of the inning and Jayson Werth, after battling Marcum for nine pitches, chased a full-count fastball up high for out no.3 of a 17-pitch frame by the Brewers' right-hander. Jackson got two outs with two pitches in the top of the sixth when Norichika Aoki and Rickie Weeks grounded to first and flew to left, respectively, to start the inning. E-Jax was careful with Braun in the Brewers' slugger's third at bat, and he got him swinging with a filthy full-count slider that ended Milwaukee's half of the inning. 6 Ks for Edwin Jackson. After Bryce Harper grounded out to second, Ryan Zimmerman stroked a line drive right to Braun in left for the second out of the Nats' sixth, and Adam LaRoche's weak roller to first ended a nine-pitch frame by the Brewers' starter. 94 pitches by Marcum after six. Still 2-1 Nats.

• E-Jax Retires 10-Straight: Aramis Ramirez flew to left on the sixth pitch of his inning-opening AB. Three pitches later, Jonathan Lucroy flew to right for the second out of the Brewers' seventh. Travis Ishikawa saw seven pitches and got good wood on 3-2 slider from Jackson, but Milwaukee's first baseman flew out to right to end a 16-pitch inning that had Edwin Jackson at 88 pitches overall after 7.0 IP, having set ten-straight Brewers down and allowed just five hits and one earned run through. Still 2-1. Jim Henderson took over for Marcum in the seventh and retired the Nationals in order in a 14-pitch frame that ended with Danny Espinosa striking out swinging. Still 2-1 Nationals. On to the eighth.

• Don't Run On Jesus Either!!: Brewers' shortstop Jean Segura broke E-Jax' streak of 11-straight set down with a sliced one-out single to center in the top of the eighth. Jackson got up on PH Corey Hart and struck the outfielder out as Segura tried for second and got thrown out by Jesus Flores. Strike'em out, throw'em out, inning ending DP. 13-pitch frame by Jackson. 101 pitches overall after eight. Brewers' right-hander Jose Veras retired Jesus Flores and pinch hitter Chad Tracy for the first two outs of the eighth with Tracy's pinch hit appearances ending E-Jax' night. Jayson Werth singled through short with two down for Washington's fifth hit of the night, but he got thrown out trying to steal second in the next AB. 2-1 Nats after eight.

• Ready Or Not: Tyler Clippard entered the game in the ninth looking for save no. 33 of 2012. Norichika Aoki squared to bunt late and dropped a perfect one down the third base line that not even Ryan Zimmerman could handle. Leadoff runner on. With Rickie Weeks up, a passed ball moved the tying run into scoring position. A fly to deep center by Weeks moved Aoki to third. [Ed. note - "Of course Harper tried to throw the advancing runner out from the track and actually made it close."]

Ryan Braun lined to left in the next at bat and it was tied at 2-2 in the top of the ninth. "MVP! MVP!" Apparently there were some Brewers fans in D.C. Braun stole second in the next at bat, taking his 29th SB of the season, and an Aramis Ramirez double to right gave Milwaukee the lead. 3-2 Brewers. A wild pitch moved Ramirez over to third with one down. Jonathan Lucroy flew to left for out no.2. Travis Ishikawa grounded to short for what should have been out no.3, but Ian Desmond's throw pulled LaRoche off the bag and the Brewers took a 4-2 lead. E:6. Craig Stammen took over for Clippard and struck Carlos Gomez out to end the top of the inning...

• Comeback?: Brewers' closer John Axford came out for the bottom of the inning. Bryce Harper grounded back to the mound. One down. Ryan Zimmerman took a 3-1 pitch outside for ball four and a one-out walk in front of Adam LaRoche, whose first inning HR accounted for the Nats' only runs tonight. LaRoche K'd swinging for out no.2, leaving it up to Michael Morse. Zim took second on defensive indifference. Morse... grounded out to second. Brewers win. 4-2 final. 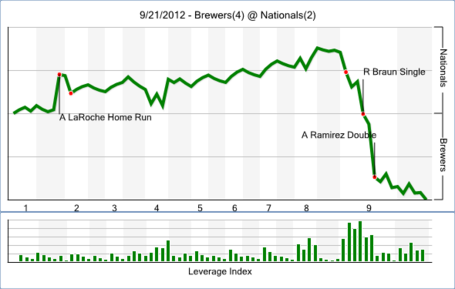