• Gio Goes For No.20: You have to go all the way back to 1953 to find the last 20-game winner in Washington, D.C. baseball history. That year, a Newport, Virginia-born, 29-year-old, Washington Senators' right-hander named Bob Porterfield was (22-10) for the Sens with a 3.35 ERA, 73 walks (2.58 BB/9) and 77 Ks (2.72 K/9) in 34 games, 32 starts and 255.0 IP. Porterfield, in his sixth MLB season at the time, won his 20th start on September 12th in a complete game 13-hitter in a 3-2 Senators' win over the Cleveland Indians in Griffith Stadium. 27-year-old Washington Nationals' left-hander Gio Gonzalez's first shot at becoming the first 20-game winner from the nation's capital in 59 years fell short when he gave up four hits and two earned runs over 5.0 IP in a loss to the Atlanta Braves last Sunday in Turner Field. The Cy Young Award candidate got his second chance to win game no.20 this afternoon in the nation's capital in the Nats' second game of four with the visiting Milwaukee Brewers.

• NatGio: Gio Gonzalez gave up a two-out single by Ryan Braun in the top of the first, but completed a scoreless inning of work after 11 pitches. The Nationals got the leadoff runner on in the bottom of the frame when Jayson Werth took a seven-pitch walk to start the inning, but the Nats' right fielder was caught stealing as Bryce Harper struck out for the first two outs of the home-half of the frame. Ryan Zimmerman reached first safely ahead of a throw to first by Rickie Weeks, who fielded Zim's weak grounder, but double-pumped and was a step late getting the ball to first. Nats' 1B Adam LaRoche, who homered after a two-out single by Zimmerman in the first inning of last night's game, grounded weakly to his counterpart, Corey Hart, to end a 23-pitch frame by Brewers' rookie right-hander Wily Peralta. 0-0 after one...

• Wil-d-y Peralta: Corey Hart and Carlos Gomez hit back-to-back groundouts to Danny Espinosa second to start the top of the second inning in Nationals Park. A groundout to short ended Gonzalez's second scoreless after another 11 pitches. Wily Peralta, 23, and a Dominican-born right-hander signed by Milwaukee as an amateur free agent in '05, walked Michael Morse for the second leadoff walk he issued in 2.0 IP this afternoon. Brewers' shortstop Jean Segura knocked an Ian Desmond grounder down, but had no play on the Nats' SS's infield single that put two on for Danny Espinosa. Peralta threw a wild pitch in an 0-2 count that moved both runners into scoring position, but Espinosa K'd unproductively on a check swing on the 1-2 offering from Peralta, a high 96 mph heater. Kurt Suzuki flew to short right in the next at bat and Norichika Aoki threw Morse out trying to tag and score. 9-3 DP. 0-0 in D.C.

• Werth + Harper = Runs: Ryan Zimmerman did his thing on a swinging bunt toward third by Jean Segura, but the speedy Brewers' infielder beat Zim's throw to first for a leadoff hit in the third. Segura stole his 6th base of the season with Aoki at bat after Wily Peralta K'd trying to bunt the runner over. Ian Desmond shaded his eyes as he sprinted over to the left field line to catch a sliced pop off Aoki's bat for second out of the inning, and Rickie Weeks sent Bryce Harper sprinting back toward the track in center where he made an over the shoulder catch at full speed for out no.3. Jayson Werth lined to right for a one-out double in the Nationals' third. Werth's 18th double was followed by Bryce Harper's 23rd as the Nats' 19-year-old slugger hit an opposite field blooper to left to bring Werth around. 1-0 Nats.

Brewers' catcher Martin Maldonado tried to catch Harper off second with a snap throw in the next at bat, but Harp just took third for his 14th SB of the year. Ryan Zimmerman K'd swinging for out no.2, but Adam LaRoche came through with a two-out RBI double to bring Harper in from third and make it 2-0. LaRoche's 31st. Michael Morse walked with two down to bring Ian Desmond up, and a grounder to short brought in another run when Jean Segura threw away an attempt at a force at second. LaRoche scores, 3-0. Single, E:6. Danny Espinosa walked with two down to load the bases and end Wily Peralta's day. Livan Hernandez replaced Milwaukee's starter on the mound. Kurt Suzuki took a 65 mph 1-2 curve for a called strike two and popped the 2-2 offering up to left to end the fourth. 3-0 Nats.

• TKCHZ: Bryce Harper shaded his eyes and stumbled a bit, but made the catch on a fly to center by Corey Hart that ended Gio Gonzalez's 4th scoreless inning against the Brewers after nine pitches. 48 overall for Gonzalez through four. Jayson Werth was 2 for 2 with a walk after a one-out single to center in the Nationals' fourth. Harper walked to put two on for Ryan Zimmerman. A wild pitch by Livan Hernandez moved both runners up and Zimmerma--- THE KIDS CALL HIM ZIM!! THE KIDS CALL HIM ZIM!!! 3-run HR, 6-0 Nats. Adam LaRoche and Michael Morse hit back-to-back one-out singles to left in front of Ian Desmond and the Nats' shortstop hit the second three-run HR of the inning to right-center and over the out-of-town scoreboard. Desmond's 24th. 9-0 Nationals after four.

• Gio Making History Today: Gio Gonzalez issued a one-out walk to Martin Maldonado in the Brewers' fifth, then threw a 2-2 fastball by the Brewers' Jean Segura for the second out of the inning and his 200th K of the season before getting a grounder to short by Yorvit Torrealba and a force at second to end his fifth scoreless frame after 17 pitches:

With 200 in hand, Gio Gonzalez is the first DC-based pitcher to record 200 strikeouts since Walter Johnson had 228 in 1916. #Nationals

Bryce Harper singled to center off Brewers' right-hander Josh Stinson with two down in the Nats' fifth, but Ryan Zimmerman K'd looking to end the inning and strand Harper at first. Still 9-0 Nats.

• Run, Harp!!: Norichika Aoki hit a ground-rule double over Bryce Harper's head and the center field wall on a bounce to start the sixth. Harper got to the ball when Rickie Weeks lined to center in the next at bat, but it bounced off the Nats' center fielder's glove for the second straight double of the inning. A groundout to short by Ryan Braun brought the Brewers first run in, 9-1, and a sac fly by Aramis Ramirez made it 9-2 after five and a half. Make that 10-2! Brewers' right-hander Tyler Thornurg took over in the 6th and gave up HR no.32 of 2012 by Nats' first baseman Adam LaRoche, who crushed an 0-2 change and hit it deep to right over the out-of-town scoreboard and 10 rows back into the stands. 10-2 Nationals in D.C. after six.

• Gio In Line For 20: Gio Gonzalez kind of face-planted on the grass in front of the mound when he caught a spike on a 2-2 pitch to Brewers' catcher Martin Maldonado in the seventh, but he was unharmed and bounced back to strike Maldonado out before fielding a grounder off Jean Segura's bat and throwing to first to end Milwaukee's seventh. 201 Ks on the year for Gio. 5 today and he was at 90 pitches total after a nine-pitch 7th. Still 10-2 Nats. Tyler Thornburg threw a quick, nine-pitch seventh of his own against PH Chad Tracy, Roger Bernadina and Bryce Harper to keep it 10-2 after seven.

• Do It For Gio!!!: Michael Gonzalez took over for the Nats in the top of the eighth, retiring Yorvit Torrealba and Logan Schafer before walking Eric Farris with two down to bring Tony Plush to the plate. Plush, aka Nyjer Morgan, K'd looking at a 2-2 fastball to end Milwaukee's eighth. Tyler Thornburg came back out for the bottom of the inning. Mark DeRosa K'd looking at what he thought was ball four. Tyler Moore flew to center. Corey Brown grounded to first. 10-2 after 8.0.

• 40, 493 in D.C: 40,493 fans turned out for the Saturday game with the Brewers. Christian Garcia came on in the ninth to lock down Gio's 20th win. Travis Ishikawa grounded to second. ONE!!! Jeff Bianchi sliced a single over second with one down in the frame. Taylor Green hit a 2-0 pitch out to right in the next at bat to make it 10-4 Nationals. Martin Maldonado singled to center for the third-straight hit. Jean Segura K'd swinging for out no.2 and Yorvit Torrealba did the same for no.3. Ballgame!! Gio wins no.20. 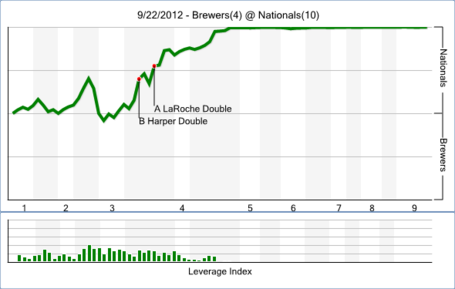