• Wang vs Gallardo: Chien-Ming Wang had a tough assignment this afternoon. The 32-year-old, sinkerballing right-hander hadn't started a game since June 19th, and had struggled with injury issues all season. Now he was being asked to make a spot start since the Washington Nationals had played a doubleheader earlier this week against LA and manager Davey Johnson didn't want to have any of their starters throwing on short rest. In addition to the fact that he hadn't started often this season, and hadn't enjoyed much success when he did, Wang was matched up against Brewers' right-hander Yovani Gallardo, who was (8-0) over his last 10 starts heading into today's game, with Milwaukee 10-0 over the same stretch.

Wang got a weak grounder back to the mound from Norichika Aoki in the first at bat of the game, then had two straight batters reach on a hard grounder toward third by Rickie Weeks that Ryan Zimmerman couldn't handle and a single to center by Ryan Braun, but the Nats' right-hander retired the next two Brewers he faced and held Milwaukee off the board in a 15-pitch opening frame. After Yovani Gallardo retired the first three Nationals he faced in a 17-pitch bottom of the inning, Brewers' outfielder Logan Schafer sliced a one-out single to left on a 1-2 sinker from Wang in the top of the second, but he was caught stealing in the next at bat and Chien-Ming Wang got Jean Segura swinging to end a 12-pitch frame.

• 3U: Adam LaRoche doubled for the 32nd time this season in the Nationals' second, sending a grounder off Corey Hart's glove at first that trickled into right field for the Nats' first hit of the game off Gallardo. MIchael Morse K'd swinging unproductively for the first out of the frame, but Ian Desmond beat Aramis Ramirez's throw to first on a weak grounder toward third and had an infield single that moved LaRoche up 90 ft, before Danny Espinosa lined right to Hart at first and into a double play that ended the inning. 3 unassisted. 0-0 in D.C.

• Aoki "May" Have Been Safe: Ian Desmond made a ridiculous diving play to field a sharp grounder to short off Yovani Gallardo's bat, but he couldn't get his feet under him as he fired a throw to first wide of the bag. Norichika Aoki grounded to first in the next at bat and Adam LaRoche started a 3-6-1 DP that ended with Wang stretching and just keeping his foot on the bag to complete the double play... uh, at least according to first base ump Marvin Hudson. A swinging K by Rickie Weeks ended a 12-pitch frame and Wang's third scoreless. After completing his third inning of work on the mound, Chien-Ming Wang collected his second MLB hit in 38 ABs when he lined to left-center off Gallardo for his first career double. Wang took third on a single to right by Jayson Werth, but Bryce Harper grounded into an inning ending 6-4-3. 0-0 after three in D.C.

• Harper vs the Sun: Bryce Harper got under a fly to center then lost it in the sun, gifting a double to the Brewers' Ryan Braun (no.33) in the first at bat of the fourth. The next ball was sent out to center too, but this time Harper managed to catch it, retiring Aramis Ramirez for the first out of the frame. Corey Hart sent a one-out single through short to move Braun to third, and Jonathan Lucroy drove the first run of the game in with a sharp grounder under a diving Adam LaRoche and into right. 1-0 Milwaukee. Logan Schafer got hold of a first-pitch sinker and doubled off the out-of-town scoreboard in the next at bat to bring Hart around and make it 2-0 Milwaukee after three and a half. The 30-pitch frame had Wang at 69 total after four. Zimmerman walked to start the Nationals' fourth, but Adam LaRoche K'd looking and Michael Morse grounded into an inning-ending 6-4-3. 2-0 Brewers after four.

• Goon Squad Leader: Craig Stammen took over for Chien-Ming Wang in the fifth. Stammen got a fly to right by Norichika Aoki and swinging K from Rickie Weeks (on a 92 mph 3-2 two-seamer) for the first two outs of the inning before he issued a two-out walk to Ryan Braun. Aramis Ramirez crushed a 3-2 slider and sent a double off the wall in left that moved Braun around to third, and Stammen lost Corey Hart and ended up loading the bases with two down before Jonathan Lucroy popped to Ian Desmond in short left to end the top of the fifth after 29 pitches by the Nats' right-hander reliever. Ian Desmond walked to start the Nats' fifth and hustled around to third on an opposite field double by Danny Espinosa, who connected for his 36th two-base hit of 2012. 2nd/3rd, 0 outs. Kurt Suzuki worked the count full, but K'd swinging at a 94 mph heater for the first out of the inning. Pinch hitter Chad Tracy got down 0-2 early, but battled back and lined a 2-2 cutter to right for an RBI single that cut Milwaukee's lead in half. 2-1 Brewers, runners on 1st/3rd, and a sac fly to left by Jayson Werth tied it at 2-2 after five.

• Chiefs' Duke: Zach Duke retired the first two batters he faced in the sixth after just five pitches, then issued a six-pitch two-out walk to Yorvit Torrealba before a fly to right by Norichika Aoki ended a 13-pitch inning with the score still tied at 2-2. Brewers' right-hander Brandon Kintzler took over on the mound after Gallardo was hit for in the top of the sixth and retired Ryan Zimmerman and Adam LaRoche before issuing a two-out walk to Michael Morse. Ian Desmond, who was 1 for 1 w/ a walk against Gallardo, ripped a 1-2 change to left for a two-out double, no. 32 of 2012, putting runners on second and third for Danny Espinosa. The Brewers walked Espinosa intentionally to get to Kurt Suzuki, and the Nats' catcher struck out to leave'em loaded and keep it tied at 2-2.

• FIREWORKS!!: Nats' righty Ryan Mattheus gave up an infield single by Rickie Weeks, but the Brewers' shortstop was forced out at second on a grounder to third by Ryan Braun that Ryan Zimmerman backhanded before making a spinning throw as he fell into foul territory. #GG3B. Aramis Ramirez doubled to right in the next at bat, but Jayson Werth got it in quickly enough to hold Braun at third. An intentional walk to Corey Hart loaded the bases, and a single up the middle by Jonathan Lucroy gave Milwaukee back its lead. 3-2. No out on the play in spite of Desmond's effort. Jayson Werth tracked a fly to right off Carlos Gomez's bat then ducked out of the way when he lost it in the sun. 4-2. 5-2 on an RBI groundout to short by Jean Segura. Francisco Rodriguez retired the Nats in order in a 10-pitch, 1-2-3 bottom of the seventh.

• Es: Norichika Aoki reached on an error by Steve Lombardozzi in the top of the eighth. Rickie Weeks buzzed Michael Gonzalez's tower with a liner back up the middle and Bryce Harper misplayed it for the second error of the inning, allowing both runners to advance. Second and third with no outs. A sac fly to center by Braun made it 6-2 Milwaukee after seven and a half. Brewers' reliever Jim Henderson retired the Nats in order in a 17-pitch second that ended with LaRoche and Morse striking out looking.

• Comeback?: Carlos Gomez doubled to right with one down in the Brewers' ninth and almost got picked off after taking far too wide a turn around second. The Milwaukee outfielder took third on a groundout to first by Jean Segura, but was stranded there when pinch hitter Jeff Bianchi K'd to end the top of the frame. Jose Veras came on to pitch the ninth for the Brewers. Ian Desmond took a leadoff walk. Roger Bernadina lined out to short. Kurt Suzuki K'd swinging. Steve Lombardozzi walked on four pitches to get Jayson Werth up with two down. John Axford came on to close it out. Werth... flew out to center. Ballgame. Brewers win, 6-2 final. Nats need a win tomorrow for the series split. 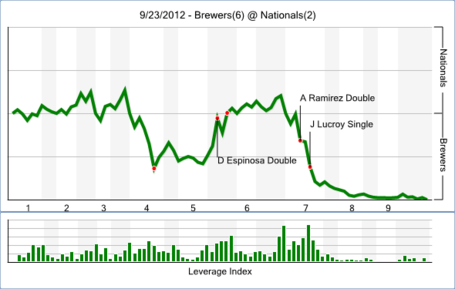