• Zimmermann's 31st: "[Jordan Zimmermann] is as strong as a bull," Washington Nationals' skipper Davey Johnson told reporters before this afternoon's series finale with the Milwaukee Brewers. "You guys were worried about him because he had a couple not Jordan-esque type starts, but he had a little bit too much rest in between. But last time out he was outstanding." In his last outing, Zimmermann held the LA Dodgers' batters to a run on six hits in 6.0 IP in a 3-1 win over Los Angeles, improving to (11-8) on the year with a 2.96 ERA, 3.55 FIP, 39 walks (1.92 BB/9) and 141 Ks (6.95 K/9) in 30 starts and 182.2 IP. "He knows what he needs to do to be successful out here," Zimmermann's manager said, "and I like where he's at." This afternoon in Nationals Park, the 26-year-old right-hander held Milwaukee to one run on four hits in 6.2 IP as the Nats earned the split in the four-game series with a 9-1 win over the visiting Brewers.

• Pride Of Auburndale: Zimmermann's 31st start of the season began with a 14-pitch first in which he gave up a one-out walk to Rickie Weeks, but got help from Nats' center fielder Bryce Harper, who caught a line drive to center from Ryan Braun, then tracked a fly ball off Aramis Ramirez's bat to the track and made a nice catch as he slammed hard into the center field wall. 0-0 after a half. Harper reached on a swinging bunt with one down in the home-half of the first, then moved up when Ryan Zimmerman drew a walk in the next at bat. Brewers' right-hander Marco Estrada got behind Adam LaRoche, 3-0, but the Nats' first baseman got the green light and popped up to the infield. With Ian Desmond up, Harper caught the Brewers napping, swiping third on a pitch in the dirt and then scoring when catcher Jonathan Lucroy threw past an empty base and into left. #RUNHARP! Harper's 15th SB of 2012. 1-0 Nationals after one in D.C.

• Make that 1-1: Brewers' first baseman Corey Hart got hold of the first pitch Jordan Zimmermann threw in the second and launched an opposite field blast to right and over the out-of-town scoreboard to tie it with one swing. 1-1 on Hart's 28th. Two outs later, 22-year-old former Angels' infield prospect Jean Segura tripled off the right field scoreboard, collecting his third three-base hit of the year, but Zimmermann got the opposing pitcher looking to end the second after 22 pitches. Danny Espinosa, Roger Bernadina and Kurt Suzuki went down in order in a 14-pitch second by Marco Estrada and it was still tied at 1-1 after two.

• 0 for 2 In 3-0 Counts: A swinging bunt by Norichika Aoki on a 1-1 pitch bounced off the runner and gave Jordan Zimmermann a quick out in the top of the third. Rickie Weeks worked the count full, but sent a grounder to short. Grounder. Desmond. Out. and two down. Zimmermann got up 1-2 on Ryan Braun and threw a 96 mph four-seamer by the Brewers' slugger, who fouled it into Kurt Suzuki's mitt to end a 17-pitch, 1-2-3 3rd for the Nats' right-hander. Zimmermann put down the glove, picked up a bat and singled to center off Marco Estrada to lead off the Nationals' half of the third. Jayson Werth pulled a 3-1 fastball through the left side of the infield for the second-straight single off Estrada. With two runners on, Bryce Harper was first-pitch swinging and flew out to left. Ryan Zimmerman took a 1-2 fastball outside for a called strike three and out no.2 and Adam LaRoche popped out behind home to strand two runners after three straight outs. [ed. note - "LaRoche popped up on another 3-0 pitch. That's 0-2 on 3-0 pitches today for LaRoche."]

• FBb Jumps The Gun, Sorry Jordan: A lineout to short and a grounder to third got Jordan Zimmermann two quick outs in the fourth from Aramis Ramirez and Corey Hart, respectively. Jonathan Lucroy? Grounder. Desmond. Out. 10-pitch, 1-2-3 4th for Zimmermann, and seven-straight Brewers' retired after Segura's triple in the second. Danny Espinosa lined a double to right with one down in the Nationals' fourth, collecting his 37th two-base hit of the season. A balk moved the Nats' second baseman to third, but Espinosa was thrown out at home trying to score on a weak grounder to first by Roger Bernadina. Ill-advised attempt. 2 outs. Kurt Suzuki singled to center with two down and cleared the pitcher's spot. 1-1 after four. I shouldn't have written that ahead of time, Jordan Zimmermann came through with his second hit of the game, lining to center with two down to score Roger Bernadina and make it 2-1 Nationals with two down in the fourth. 2 for 2 on the day for the Nats' right-hander. Jayson Werth flew to center to end the four--- I did it again! Werth flies to center and Carlos Gomez loses it in the sun. 2-run double when the Brewers' CF dives desperately but misses it. 4-1 Nats on Werth's 19th double of 2012. So it would be Ryan Zimmerman who would end the fourt-- NOPE! THE KIDS CALL HIM ZIM!! THE KIDS CALL HIM ZIM!!! After a double steal puts both runners in scoring position, Ryan Zimmerman hits his 24th HR of 2012 over the GEICO sign on the right-center wall. 7-1 #Nats after four.

• Zimmermann Rolling: Danny Espinosa tried to barehand a one-out grounder from Jean Segura but came up empty on what was ruled an infield single. Travis Ishikawa hit for Estrada with one down in the fifth, or more accurately, K'd looking at a low 94 mph 3-2 slider from Zimmermann. K no. 4 for the Nats' right-hander, who then threw a 79 mph 1-2 curve by Norichika Aoki for K no.5 to end a 19-pitch inning at 82 pitches overall. Ian Desmond took a six-pitch walk from Brewers' right-hander Kameron Loe to start the Nationals' fifth, then stole his 20th base of the season with Danny Espinosa at bat. Espinosa singled to left, then took second when Braun bobbled the ball on the outfield grass. Second and third for the Shark, but a grounder to short resulted in another out at home, at least according to home plate ump Marvin Hudson, who got an earful from Davey Johnson after punching Desmond out. Kurt Suzuki made Loe pay anyway, however, with a sharp grounder by third that drove both runners in and made it 9-1 Nationals. Suzuki's 19th double of 2012.

• 13 of 15: A 2-2 slider got Rickie Weeks swinging for out no.1 of the sixth and Jordan Zimmermann's 6th K. Ryan Braun reached safely on an infield single neither Ryan Zimmerman or Ian Desmond could get to. Aramis Ramirez hit a chopper to third that allowed Zimmerman to cut the lead runner down at second for out no.2 and Corey Hart flew to right to end a 13-pitch frame by the Nats' right-hander. 13 of the last 15 set down by Zimmermann, who was at 95 pitches after he finished the sixth. Ryan Zimmerman singled to center to start the Nats' sixth, but Adam LaRoche flew to left and Ian Desmond grounded into and inning 6-4-3 DP. 9-1 after six.

• Zimmermann's Done: Jordan Zimmermann gave up a four-pitch walk to the first batter in the seventh, Jonathan Lucroy, but got Carlos Gomez looking with a front door 0-2 bender that was called strike three for the Nats' right-hander's 7th K in 6.1 IP. Jean Segura grounded to Ryan Zimmerman at third, who made an underhand toss to second for the force and out no.2, at which point Jordan Zimmermann was lifted in favor of left-hander Sean Burnett, who got pinch hitter Martin Maldonado swinging to end the seventh. Still 9-1 Nats. Danny Espinosa singled to start the Nats' seventh, but he was erased on a DP grounder off Tyler Moore's bat, and Kurt Suzuki grounded to third to end a 14-pitch inning by Brewers' lefty Manny Parra.

• Ready Or In the 8th?: Tyler Clippard got a fly to left from Norichika Aoki for the first out of the eighth. Rickie Weeks K'd swinging at a 93 mph full-count fastball for out no.2, but Ryan Braun reached safely on a pop to short right that neither Danny Espinosa or Jayson Werth could reach. A two-out double by Aramis Ramirez scored Braun and made it a 9-2 game before Corey Hart flew to right to end Milwaukee's eighth. Mark DeRosa walked to start the Nats' eighth, and one out later took second on an infield single by speedy Eury Perez. Ruled an E:3. Poor Eury. Ryan Zimmerman singled to right in the next at bat and the Nats took an 11-2 lead. Two runs score, one on the error. [Ed. note - "Perez's hit changed back to a hit, his first in the majors."] The Nats loaded the bases with one down and added another run when Danny Espinosa grounded into a force at second, 12-2.

• DRUUUUUUU!!!: Nats' right-hander Drew Storen came out for the ninth. Jonathan Lucroy reached safely on a grounder up the middle to start the inning, but Jean Segura grounded into a 4-6-3 DP and Yorvit Torrealba grounded to third to end it. Ballgame. Nats win, 12-2 final. 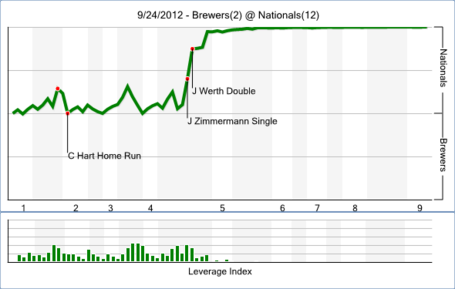 *I had the dOOOOOOOOM post all ready to go.