The Washington Nationals lost to the Philadelphia Phillies 6-3 in the first game of their series in Citizens Bank Park.

PHILADELPHIA - Citizens Bank (aka Nats Park North): Jayson Werth gave everyone behind him in the lineup a good look at what Philadelphia Phillies' lefty Cole Hamels was working with tonight before he struck out swinging to end an eight-pitch at bat in the top of the first of the series opener in CBP. 19-year-old Washington Nationals' OF Bryce Harper singled up the middle on a 2-2 cutter from the Phillies' 28-year-old starter in the next AB. Philly 3B Kevin Frandsen dove for a sharp grounder off Ryan Zimmerman's bat and threw to second for a force and out no.2 and Cole Hamels got Adam LaRoche, (who was 7 for 22 w/ a double, four HRs, a walk and 5 Ks vs Hamels before tonight) swinging for the 6th K in their respective careers when LaRoche chased a full-count curve into the dirt. 22-pitch opening frame for Hamels. Jayson Werth was a few steps onto the track in right and stumbling backwards when he caught a line drive from Jimmy Rollins for the first out of Ross Detwiler's outing. Chase Utley singled to center with two down in the Phillies' first, but the Nats' 26-year-old lefty threw a 93 mph 1-2 sinker by Ryan Howard to end a scoreless, 11-pitch bottom of the first with a swinging K. 0-0 after one in Citiizens Bank.

• Small Acts: A 1-2 change made Michael Morse look bad as Cole Hamels collected his third K in 1.1 IP from the first batter in the second. One pitch later the Philly lefty had two outs after Ian Desmond popped up to center. Hamels spiked a 3-2 fastball and issued a two-out walk to "Right Side" Danny Espinosa. The Nats' infielder stole his 20th base of the year with Kurt Suzuki at the plate and then scored when the Nationals' catcher hit a 2-2 curve back up the middle for a two-out RBI single and a 1-0 Nationals' lead. A 19-pitch inning had Hamels at 41 after 2.0 IP. Phillies' catcher Carlos Ruiz grounded back to the mound. John Mayberry to second. Two down. Philly LF Darin Ruf ripped into a 93 mph full-count 4-seamer, however, and collected his first major league hit, a solo shot to left-center in CBP in the 26-year-old outfielder's third big league AB. HR Ruf. 1-1 game. Kevin Frandsen doubled with two down and Detwiler walked the opposing pitcher, but Jimmy Rollins popped up to first to end the second.

• Ruiz Crushes One: Cole Hamels retired Jayson Werth, Bryce Harper and Ryan Zimmerman in order in a 12-pitch top of the third. Ross Detwiler issues his second walk of the game to John Mayberry in the first at bat of the Phillies' half of the inning and Chase Utley took the second straight free pass from the Nats' lefty in the next AB, then Ryan Howard made Detwiler pay for the walks with an RBI single that made it 2-1 Phillies in CBP. With two runners on in the next at bat, Carlos Ruiz crushed a 2-0 fastball and sent a line drive out to left over Michael Morse's head and the outfield wall to make it 5-1 Phillies with no one out. Detwiler retired the next three batters in order, but he was at 61 pitches overall after a 26-pitch 3rd.

• 2-Out Rally: Michael Morse ripped a single through short on a first-pitch cutter from Hamels with one down in the Nats' fourth, but Danny Espinosa took two healthy cuts at a 3-1 change and a full-count fastball and came up empty, fouling strike three into Ruiz's mitt. Cole Hamels' 17-pitch fourth had him at 70 pitches with a four-run lead and 6 Ks overall. Ross Detwiler needed just nine pitches to retire Cole Hamels, Jimmy Rollins and John Mayberry in order in the bottom of the inning, after which the Nationals' lefty was at 70 pitches as well. Kurt Suzuki was 2 for 2 tonight and 2 for 6 vs Hamels in his career after he singled to start the top of the fifth. Detwiler bunted his catcher over to second, and one out later Bryce Harper hit a two-out single to center under a diving Jimmy Rollins to bring Suzuki in from second and make it 5-2 Phillies. Ryan Zimmerman battled for seven pitches before he hit a 2-2 change through the left side of the infield for the second straight RBI single. Harper scored easily, after third base coach Bo Porter frantically waved him around. 5-3 Phillies. Adam LaRoche lined to center for the third two-out hit off Hamels, but Michael Morse grounded into a force at second to end a 29-pitch innings by the Phillies' left-hander.

• Nine-Straight: Ross Detwiler started the bottom of the 5th at 70 pitches overall. Chase Utley K'd swinging at a 1-2 slider for the Nats' lefty's 3rd K in 4.1 IP. Grounder. Desmond. Out. Ryan Howard rolled one out to the Nats' shortstop at second in the shift. A fly to center by Carlos Ruiz ended a 14-pitch frame after which Detwiler had retired nine-straight Phillies following Ruiz's three-run third inning home run. 84 pitches overall for Detwiler.

• Hamels and Det Done: Josh Lindblom took over for Cole Hamels in the top of the sixth, throwing a 13-pitch, 1-2-3 frame against the Nationals. Ross Detwiler's night ended after: 5.0 IP, 5 H, 5 R. 5 ER, 3 BB, 3 Ks, 2 HR, 84 P, 49 S, 6/4 FO/GO when Craig Stammen replaced him on the mound in the bottom of the sixth. The first pitch Stammen threw got crushed. Phillies' OF Domonic Brown sent one screaming out to right for his 5th HR of 2012 and Philadelphia took a 6-3 lead. Darin Ruf singled in the next at bat and Nate Schierholz walked with one down. A second-straight walk to Jimmy Rollins loaded the bases for John Mayberry, who K'd swinging for out no.2. Davey Johnson went to the pen with the bases loaded and two down and Michael Gonzalez got help from Adam LaRoche on a sharp one-hopper to first from Chase Utley that ended the home-half of the frame. 6-3 Phillies after six.

• Pen vs Pen: Phillies' right-hander Justin De Fratus retired pinch hitter Steve Lombardozzi and Jayson Werth before he gave way to Antonio Bastardo. The Philly lefty got the best of Bryce Harper, striking him out, and made the 6-3 lead hold up through six and a half. Zach Duke took over for the visiting Nationals in the bottom of the seventh, striking Ryan Howard out for the first out of the frame. Carlos Ruiz flew to right for out no. and Domonic Brown grounded to second to end a quick, 11-pitch, 1-2-3 inning by Duke. Righty Phillipe Aumont got a fly ball ot center from Ryan Zimmerman for out no.1 of the eighth. Adam LaRoche grounded to short for out no.2 and Michael Morse was thrown out by Carlos Ruiz to end a 15-pitch frame.

• After Zach Duke threw his second scoreless inning, Phillies' closer Jonthan Papelbon came on for the top of the ninth. Ian Desmond K'd swinging through a 94 mph 1-2 fastball for out no.1. Danny Espinosa K'd swinging two. 180th K of 2012 for the Nats' 2B. Kurt Suzuki tried to keep hope alive... and managed to single to center to do just that. Chad Tracy came off the bench in the next at bat and rolled a weak grounder to short to end it. Ballgame. Phillies win 6-3. 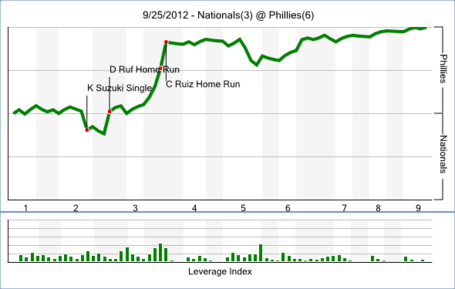