The Washington Nationals jumped out to a 5-0 lead early and held on as the Philadelphia Phillies battled back to make it a nail-biter in Citizens Bank Park. 8-4 final.

• #Lannimal: When Lannan took the mound in the bottom of the first he had a 2-0 lead courtesy of 19-year-old Nats' outfielder Bryce Harper's 20th HR. The left-handed hitting, preternaturally-gifted, eye black oozing power bat put one out to the left of center field some 400 ft+ from home after Phillies' right-hander Kyle Kendrick had walked Jayson Werth in the game-opening AB. 2-0 D.C. Harper's 20th HR of the year lifted the 2010 no.1 overall pick over Mel Ott (19 HRs) and into second place all alone on the list of total HRs by a teenager, behind only the Boston Red Sox' Tony Conigliaro (24). 4 in 7+ games? Don't doubt Harper. #RUNHARP! 2-0 Nats.

• G.D.O x 2: Grounder. Desmond. Out. John Lannan's night started with a groundout to short off Jimmy Rollins' bat. John Mayberry did it too. Grounder Desmond out and two down. Ian Desmond took care of the first two. Chase Utley's grounder to first baseman Adam LaRoche ended an 11-pitch, 1-2-3 bottom of the first for Lannan. 2-0 Nationals in Philadelphia.

• +Range, +Arm, + Power: When John Lannan stepped on the mound for the top of the second he had a 5-0 lead. Nationals' shortstop Ian Desmond got hold of a 1-2 cutter from Kendrick and crushed it, sending a solo HR to left-center in Citizens Bank to give Washington a 3-0 lead four pitches into the second. Steve Lombardozzi reached safely on a fielding error by Chase Utley in the next at bat and the error was compounded when Nats' catcher Kurt Suzuki hit his 6th HR of 2012 out to left field to make it a 5-0 game. Bryce Harper grounded into a force in his second at bat of the game, then stole his 17th base of the year with Ryan Zimmerman up, but Harper was stranded when Zim lined to second on one hop to end a 22-pitch inning that had Kyle Kendrick at 34 pitches after two.

• 22 In 2.0 IP: A high throw to first by Ian Desmond pulled Adam LaRoche off the bag as he tried to turn a 1-6-3 DP on a grounder to the mound by Carlos Ruiz. Ryan Howard was forced out at second, however, after Lannan had hit the Phillies' slugger in the elbow for the fourth HBP in their respective careers. Lannan popped Domonic Brown up to left for out no.2 and Darin Ruf flew to Jayson Werth at the wall in right field to end an 11-pitch bottom of the second by the Nats' left-hander.

• Kendrick Hits Showers: Adam LaRoche walked to start the third. Kevin Frandsen dove to knock a sharp grounder to third by Michael Morse down, but he had no play when he picked it up foul territory off third. Kyle Kendrick's night ended there with the right-hander having allowed 5 H, 5 R, 4 ER, 2 BB and 3 HR in 2.0 IP. B.J. Rosenberg took over and got a 5-4-3 DP with the second pitch he threw, but Adam LaRoche moved up to third on the play before he was stranded when Steve Lombardozzi lined out to short. 5-0 D.C.

• Lannan Has Magics: After diving for a ball to limit damage on Morse's hit and starting the double play that helped Philly out of the Nats' third, Kevin Frandsen doubled by third to start the bottom of the third inning then scored on a throwing error when Kurt Suzuki tried to cut the lead runner down on a bunt by the Phillies' reliever B.J. Rosenberg. 5-1 when Frandsen came around as the ball sailed into left. John Mayberry singled with one down in the frame. Chase Utley did too and the bases were loaded for Ryan Howard. Howard K'd swinging at a 1-2 slider in the dirt for out no.2, however, and Carlos Ruiz's grounder to the mound ended the third. 19-pitch inning for Lannan, 41 pitches overall after 3.0 IP.

• Back, Back, Back... Doh!: B.J. Rosenberg walked John Lannan with one down before striking Jayson Werth and Bryce Harper out to end the top of the fourth. A 2-2 two-seamer got Domonic Brown. Ryan Zimmerman backhanded a grounder to third and threw Darin Ruf out for out no.2, but Bryce Harper misjudged a fly to center off Kevin Frandsen's bat and turned the probably-catchable fly to center into a triple after which the Phillies' 3B scored on an infield single by B.J. Rosenberg when Ian Desmond and Steve Lombardozzi collided trying to field the reliever's grounder up the middle. 5-2 Nats after four.

• Phillies' Pen pwns Nats: Nats' Michael Morse battled B.J. Rosenberg for 10 pitches before grounding out to end a 20-pitch inning by the Phillies' reliever. 8 of 9 set down by the Phillies' RHP. 5-2 D.C. in CBP. John Lannan needed 10 pitches to set the Phillies down in order in the bottom of the 5th. Still 5-2. Phillies' right-hander Josh Lindblom threw a quick, 12-pitch, 1-2-3 6th, retiring Ian Desmond, Steve Lombardozzi and Kurt Suzuki in order. After Lannan walked Carlos Ruiz and struck out Domonic Brown, he was replaced on the mound by Ryan Mattheus, who got an inning-ending DP from Darin Ruf four pitches into the Nats' right-hander's outing. 5-2 Nats after six.

• 14 of 15, Lordy: Josh Linblom came back out for the seventh and retired the Nationals in order on 17 pitches. 14 of 15 Nats go down after Morse's single chased Kendrick in the third. Ryan Mattheus returned for the bottom of the frame and retired the first two Phillies he faced but Jimmy Rollins connected with a 3-1 fastball and hit a two-out solo HR to right to get Philadelphia within two, 5-3. Rollins' 23rd was followed by a swinging K by Domonic Brown that ended an 18-pitch inning by the Nats' right-hander reliever.

• Clipp-ARD!!!!: Ryan Zimmerman lined a 1-2 slider from LHP Jeremy Horst to left and off the top of the wall, but the Nats' third baseman hit it so hard he was held to a single. Adam LaRoche K'd swinging in the next at bat and Michael Morse grounded into an inning-ending 4-6-3 DP. Still 5-3 Nationals in the eighth. Chase Utley doubled to right to start the Phillies' eighth on a 1-0 fastball from Tyler Clippard. Ryan Howard stepped in as the tying run and K'd swinging at a high 94 mph 2-2 heater up high. One down. A wild pitch with Carlos Ruiz up moved Utley to third and the Phillies' catcher walked to put runners on the corners. Domonic Brown flew to right for out no.2, but it was deep enough to score Utley. 5-4 Nats lead. A two-out single to right by Darin Ruf got over Danny Espinosa at second and landed in right, sending Ruiz around to third. 1st/3rd again. Two down. Kevin Frandsen fouled off two 1-2 pitches, and fouled a high 1-2 fastball into Kurt Suzuki's mitt. YES! Sorry. 3 outs.

• #Werthitude: Ian Desmond walked to start the Nats' ninth. Desmond stole his 21st base of 2012 with Chad Tracy up, but stayed put when pinch hitter grounded out. Juan Pierre charged a fly to left-center by Kurt Suzuki but came up empty in a diving attempt. 1st/3rd, 1 out. Pinch hitter Danny Espinosa K'd swinging for out no.2 While Jayson Werth waited on deck, he picked up a fouled off ball and faked a toss to the Philly fans before throwing it in the dugout. The CBP crowd did not like that. Werth was booed lustily as he stepped to the plate with two on and two out. The crowd was all over the former Phillies' right fielder and he made it even worse by singling up the middle to bring Desmond and Suzuki in and make it a 7-4 Nationals' lead. Bryce Harper lined to right for a two-out RBI triple that brought Werth around and made it 8-4.

Nats' closer Drew Storen came on in the ninth in what was no longer a save situation. Laynce Nix fouled strike three into Kurt Suzuki's mitt. ONE!!! Jimmy Rollins popped up to Ryan Zimmerman behind third. TWO!! John Mayberry grounded to third. Ballgame. 8-4 final. 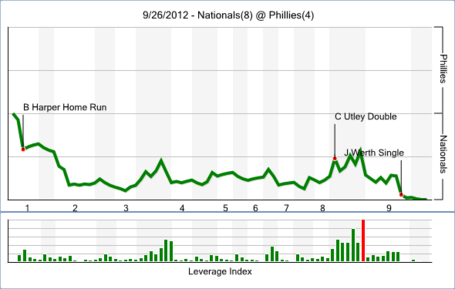