Can Bryce Harper Catch Tony Conigliaro For Most HR's By A Teenager In MLB History?

If Bryce Harper can hit four home runs in the next seven games, the Washington Nationals' outfielder will tie Boston's Tony Conigliaro for the most HRs hit by a teenager in MLB history.

Share All sharing options for: Can Bryce Harper Catch Tony Conigliaro For Most HR's By A Teenager In MLB History?

From May 14th-17th, 19-year-old Washington Nationals' outfielder Bryce Harper hit four home runs over a 13-game stretch in which he was 17 for 49 (.347/439/.714) with the four dingers, three triples, eight walks and 10 Ks. Harper hit three HRs over a nine-game stretch from June 3rd-12th. From August 29th-September 5th, the 2010 no.1 overall pick hit five HRs in eight games, seven starts and 30 at bats. If Harper can go on that sort of HR-hitting streak again in the last seven games remaining on the Washington Nationals' 2012 regular season schedule, the Nats' rookie might be able to move from no.2 to a tie for no.1 overall on the list of total HRs by a teenager is MLB history.

Harper's 20th HR of the 2012 campaign Wednesday night lifted him above the New York Giants' Mel Ott into second place behind only the Boston Red Sox' Tony Conigliaro on the list. The Revere, Massachusetts-born Conigliaro, who signed as an amateur free agent with the Sox in 1962, debuted two years later with a .290/.354/.530 season in which 6'3'', 185 lb slugger hit 21 doubles and 24 HRs to pass Ott on the list and take over the no.1 overall spot 38 years after the Ott collected 19 HRs over three seasons, 241 games and 741 PAs before he turned 20 in March of 1929.

Mickey Mantle, Ken Griffey, Jr., Mel Ott. Bryce Harper has passed them all. Only one teenaged major leaguer has more HRs as a teenager than the Nats' rookie now. If he can somehow hit four in the next seven games he'll not only help his team lock down the NL East, but he'll make history again as he's seemingly has every time he's barreled up a ball since making his MLB debut back on April 28th. 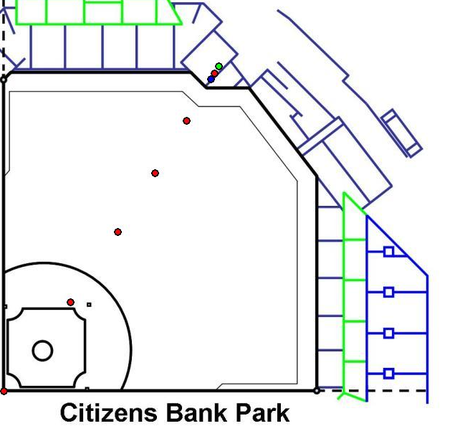