With two home runs by Michael Morse and Bryce Harper's 21st homer of 2012, the Washington Nationals beat the Philadelphia Phillies 7-3 to take two of three in CBP.

Share All sharing options for: Washington Nationals Win 7-3 To Take Two Of Three From Philadelphia Phillies In CBP

• #Werthlessit: Jayson Werth was booed as he stepped in for the first at bat of tonight's series finale between the Washington Nationals and Philadelphia Phillies in Citizens Bank Park. Rookie Phillies' right-hander Tyler Cloyd, a 25-year-old '08 18th Round pick, retired Werth for the first out of the game, but gave up Bryce Harper's 21st HR of 2012 when the Nats' 19-year-old outfielder crushed an 0-1 cutter and hit one out to right-center to give the Nationals a 1-0 lead early. Harper takes one more step toward topping the All-Time list of HRs by a teenager in MLB history, just three away from former Red Sox' slugger Tony Conigliaro. Tyler Cloyd retired the next two batters in order in a 16-pitch frame, but Harper gave the Nats an early lead in a game they desperately wanted/needed to win. 1-0 after a half...

• Wild Gio: Gio Gonzalez's 32nd start began with a groundout to short off Phillies' shortstop Jimmy Rollins' bat. Ryan Zimmerman fielded a one-hop grounder to the left of the mound and sidearmed a throw to first to beat Kevin Frandsen to the base for out no.2... but Chase Utley pulled a 94 mph 2-2 four-seamer through the right side of the infield for first hit off Gonzalez, a two-out single. Utley stole his 10th base of the year on a 1-2 curve in the dirt to Ryan Howard and the big Phillies' first baseman worked the count full and walked to put two on with two out. The second-straight walk, this one to John Mayberry, had Gonzalez up to 22 pitches in the first. Bases loaded. Two out. CRACK. Bryce Harper chased Darin Ruf's line drive to center, but wasn't going to catch this one. Three-run two-base hit to center field. 3-1 Phillies. Domonic Brown took the third walk of the inning, pushing Gonzalez up to 30 pitches total in 0.2 IP. Erik Kratz flew to right to end a 37-pitch inning Werth made the catch for the final out. Heard boos.

• MORSE CRUSH!!!: Michael Morse opened the second with the Nats' second home run off Phillies' righty Tyler Cloyd when he crushed a 1-1 cutter. Morse's 15th HR of 2012 cleared the left field wall some 380 ft from home and pulled the Nationals within one, behind 3-2 in Philadelphia's Citizens Bank Park. Cloyd retired the next three Nationals in a 14-pitch second that had the Phillies' starter at 30 pitches total after 2.0 IP. Jimmy Rollins snuck a one-out single through the right side of the infield for Philadelphia's 3rd hit of the night off Gio Gonzalez in the bottom of the second. Kevin Frandsen collected the fourth hit when he lined a 1-0 fastball to center to put two on in front of Chase Utley. The Phillies' second baseman flew to right for out no.2. More boos for Werth when he caught it. Gonzalez crossed Kurt Suzuki up and threw a wild pitch/passed ball that moved both runners into scoring position for Ryan Howard, but his groundout ended the second. 18 pitch inning, 55 pitches through 2.0 for Gio.

• Run. Produced.: Tyler Cloyd retired the opposing pitcher, Jayson Werth and Bryce Harper in order in a 14-pitch, 1-2-3 top of the 3rd. Darin Ruf was 2 for 2 tonight after he ripped a one-out single through short under a diving Ian Desmond. Domonic Brown sliced a low liner to third that Ryan Zimmerman caught for out no.2 and Ian Desmond got a force at second on an Erik Kratz grounder to end a quick, 11-pitch 3rd by the Nats' left-hander. Ryan Zimmerman smoked a low 1-2 cutter from Cloyd for a double into the left-center gap to lead off the 4th. Zim's 34th double. Zimmerman took third on a fly to deep center by LaRoche and scored when Michael Morse drove in the tying run with a groundout to Rollins at short. 3-3 game in the fourth.

• Zim. Can. Pick it.: Gio Gonzalez deflected a grounder toward the mound to the left side of the infield where Ryan Zimmerman somehow fielded it and threw an awkward one-hopper to first for Adam LaRoche to scoop. Jimmy Rollins isn't slow either and Zimmerman's throw beat him to the bag for out no.2 of what ended up being the second-straight 11-pitch inning for Gio Gonzalez. 77 pitches total in 4.0 IP.

• Harper To Left: Tyler Cloyd walked Danny Espinosa in the first at bat of the Nationals' fifth. Nats' catcher Kurt Suzuki flew out unproductively in front of Gio Gonzalez, who bunted away out no.2. Jayson Werth heard boos again when he stepped in. And heard some more when he walked to put two on for Bryce Harper. The Nats' 19-year-old outfielder spit on a 1-2 change in the dirt from Tyler Cloyd then lined a 2-2 cutter over short for an opposite field RBI single that gave the Nationals the lead. 4-3 after four and a half in Citizens Bank. Another 11-pitch, 1-2-3 inning for Gio Gonzalez in the bottom of the fifth ended with Danny Espinosa making a sliding over-the-shoulder catch on a fly to short right off John Mayberry's bat. 88 pitches for Gio Gonzalez after five.

• MORSE CRUSH AGAIN!!: Adam LaRoche doubled off the base of the out-of-town scoreboard in center field for his 33rd two-base hit of 2012 to lead off the top of the sixth. Four pitches later, Michael Morse ended Tyler Cloyd's night when he hit a 420-30 ft [estimate] HR to center and into the visiting team's bullpen on the second deck of the tiered outfield bullpens in Citizens Bank Park. Morse's second HR of the game and his 16th of 2012. 6-3 Nationals. Phillies' lefty Jeremy Horst took over for Philadelphia and retired the next three batters in order on 18 pitches. Domonic Brown doubled for the 10th time this season on a 2-0 pitch from Gio Gonzalez in the Phillies' sixth, but the Philly outfielder was stranded at third after an 18-pitch inning that had Gonzalez up to 106 pitches overall.

According to ESPN HR Tracker, Morse was the first RH hitter to hit HR into upper bullpen in Philly since his amigo Ryan Zimmerman on 4/27/09

• For Reference Until Morse's HR distance is released. Here's how far Zim's 4/27/09 HR went (ed. note "And as folks note in the comments, it didn't go "into" the visitor's bullpen, though it did hit the wall just to the left of the bullpen at a height equal to the second level, etc. But did not go "into" the bullpen, etc.") according to Hit Tracker Online 446 ft to CF: 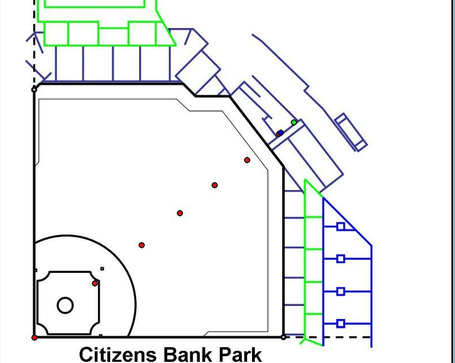 • K + WP = Run: Mark DeRosa connected for a pinch hit single then was replaced on the basepaths by Eury Perez, who stole his 3rd base of the year in front of Jayson Werth. As chants of "Werthless" rained down on the Nats' right fielder, he drew a walk out of Phillies' lefty Jeremy Horst to put two on in front of Bryce Harper with no one out. Harper started out down 0-2 and worked a nine-pitch walk out of Horst. Bases loaded for Ryan Zimmerman. Zim K'd swinging at a 1-2 change, but it got by Erik Kratz and allowed Perez to score from third. K + WP = 7-3 Nats after six and a half. Sean Burnett took the mound in the bottom of the seventh in Citizens Bank. Sean Burnett gave up a one-out double to right by Kevin Frandsen but stranded the Phillies' infielder at the end of a scoreless 25-pitch 7th. Still 7-3 Nats.

• Project Get Clip Right: Kurt Suzuki singled with two down off Phillies' right-hander Phillipe Aumont, but pinch hitter Chad Tracy grounded weakly to first to end the top of the eighth. Tyler Clippard struck two of three batters he faced out in a 15-pitch, 1-2-3 bottom of the inning against the Phillies. Another Phillies' lefty Jake Diekman took over in the top of the ninth and gave up a leadoff double by Jayson Werth. No. 20 of 2012 for the Nats' right fielder. Bryce Harper K'd swinging for the first out of the frame. Ryan Zimmerman grounded out, LaRoche flew out. Three down.

• DRUUUUUU!!!: Drew Storen took over in the ninth with Washington ahead 7-3. Juan Pierre grounded out to second. ONE!!! Nate Schierholtz grounded to short. Grounder. Desmond. Out. 2 outs, 5 pitches. Jimmy Rollins popped out to the infield to end it. Ballgame. 7-3 final. Nats win 95th of 2012.