The Washington Nationals head to St. Louis for the start of a three-game series tonight which wraps up the road half of the Nats' 2012 schedule.

• Three: In spite of a slow start to the series finale, Gio Gonzalez kept fighting and helped lead the Washington Nationals as they took two of three on the road in Citizens Bank Park with last night's win over the Philadelphia Phillies. After the game, Nats' skipper Davey Johnson reiterated that his team will be going full-steam until they wrap up the division. "I don't care if it's a save situation or whatever," Johnson said, "We're putting our best foot forward. I told the guys, 'We got three more we got to win, and so unless you can't go, tell me you can't go." When the Nats' skipper was asked last week which player he'd like to see get straightened out as the regular season wore down, Johnson pointed to Michael Morse. "I'd like Morse to get healthy," Johnson said, "I mean, he was a big guy in the lineup last year and hasn't really been fully healthy all year."

Morse had a huge game at the plate in last night's win, as he hit two home runs, including one that traveled 451 ft into the visitor's bullpen beyond the center field wall in Citizens Bank Park. "Morse said he was going to come back and hit 20 before the end of the year," Johnson told reporters after the game, "He said he feels healthy and he showed it tonight. He swung the heck out of the bat. He's a big cog in there." Asked if he's seen Morse's resurgence coming, the Nationals' manager explained that there have been signs. "Two batting practices ago he started feeling real good and frisky and started getting the head out," Johnson told reporters, "And he's been pulling the ball more, which tells me he's healthy. That ball he hit to right-center was just flat-out crushed." With the win in Philly, the Nats are three wins from clinching the NL East [unless they get some help]. "I always assume... take nothing for granted," Johnson said, "And if we win three more we're in. We win the pennant." Game one of three in St. Louis starts at 8:15 pm EDT tonight. Until then, links and lots of them, starting... RIGHT NOW!!:

• "Drew is set for his second offering to [Hanley] Ramirez. Ramirez struck out on a hard fastball away in his last appearance against Drew, and he looks to be sitting fastball." - "Drew Storen's father on the agonizing and amazing feeling of watching his son" - Mark Patrick, SI.com

• "Pitching coach Steve McCatty told [Davey] Johnson that [Gio] Gonzalez had only needed 13 pitches in the bullpen before he felt like he was ready." - "How Gio Gonzalez salvaged his start in the Nationals' win" - Amanda Comak, Washington Times

• "But as the final week of the regular season arrives, the Nationals have yet to celebrate anything, aside from the fact they're guaranteed to play at least one playoff game in October." - "Nats getting close, but not quite there yet" - Mark Zuckerman, CSNWashington.com

• "The earliest the Nationals can now clinch the division is Saturday. You won't find anyone in the clubhouse looking past tonight's game..." - "Nationals Pastime: Perfect timing for a return to form" - Dan Kolko, MASNSports.com

• "The Astros likely were motivated to act quickly to hire [Bo] Porter, who has drawn significant managerial interest, having interviewed for openings with the Nationals, Marlins and Pirates in the past." - "Astros officially hire Bo Porter as their manager" - Adam Kilgore, Washington Post

• "[Bo] Porter, the Washington Nationals’ third-base coach, was named manager of the Houston Astros on Thursday, accomplishing a career goal and, making it that much sweeter, getting to move home to do it." - "Bo Porter heading home to manage Astros" - Amanda Comak, Washington Times

• "Bo Porter is not from Houston. He grew up in Newark, N.J., and played college football and baseball at Iowa." - "Nationals' Porter hired as Astros' manager" - Brian McNally, WashingtonExaminer.com

• "'This is the last time in which I will talk about this topic. My focus is on the Washington Nationals and our quest to win the World Series title,' [Bo] Porter said." - "Nats coach Bo Porter named Astros' manager" - Bill Ladson, nationals.com: News

• "Mike Rizzo on why he allowed Porter to interview and accept a job with another organization while under contract with the Nationals: 'It's the fair thing to do. I would never stand in anybody's way to get the dream job of their life...'" - "Davey Johnson, Bo Porter & Mike Rizzo discuss Porter's hiring by the Astros" - Amanda Comak, Washington Times

• "The Nationals will lose their third base coach after this season, and Bo Porter may not be the last member of the staff to leave." - "Bo Porter won’t let Astros manager job distract him from the Nationals’ playoff run" - Adam Kilgore, Washington Post

• "'When you play in Los Angeles, you meet movie stars,' Nationals outfielder Jayson Werth says. 'When you're playing in Washington, you meet people that run the world.'" - "Harry Reid, Mitch McConnell among DC bigwigs rooting for Nationals" - Mel Antonen - SI.com

• "It's been a frustrating season for [Michael] Morse, who has battled serious injuries and nagging injuries and hasn't been able to produce as much as he would have liked." - "Instant analysis: Nats 7, Phillies 3" - Mark Zuckerman, NatsInsider.com

• "The Nationals were able to win the game thanks to two home runs by Michael Morse, who drove in four runs." - "Washington Nationals at Philadelphia Phillies - September 27, 2012" - Bill Ladson, MLB.com WSH Recap

• "At age 19, he hit his 21st home run Thursday in the first inning of a game in Philadelphia. Only Tony Conigliaro has hit more as a teenager in baseball history." - "Historic season of Nationals' Harper might not be enough for NL rookie award" - Brian McNally, WashingtonExaminer.com

• "[Bryce] Harper may not be in consideration for the National League MVP award, as [Mike] Trout will be in the A.L., but he has perhaps turned into a favorite for N.L. Rookie of the Year." - "Looking at Harper and the Rookie of the Year race" - Chase Hughes, CSNWashington.com

• "'I like those 93 runs a lot better,' [Bryce] Harper said of his home run milestones. 'Getting on base for all these guys, just getting on base and letting them get those RBIs and whatnot..." - "Praise for Harper as impressive debut winds down" - Joey Nowak, nationals.com: News

• "Opponents have been lucky to get Morse when he was nursing a wrist injury. He had hit only two homers the entire month before matching that total with two in the same game Thursday." - "For one night, Morse's power returns and Clippard shuts them down" - Byron Kerr, MASNSports.com

• "'I guess it’s never too late to get going,' [Michael] Morse said. 'I feel good. It’s been a tough year for me...'" - "Nationals vs. Phillies: Michael Morse hits two homers as Washington lowers magic number to three" Adam Kilgore, The Washington Post 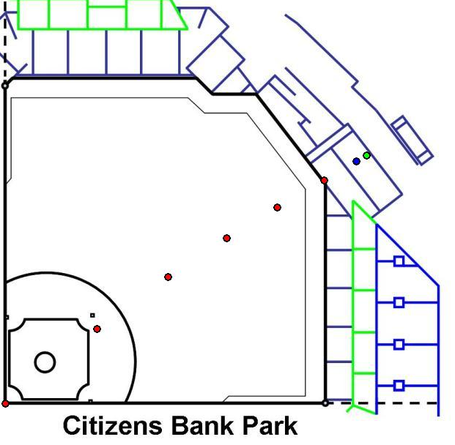 • "With the postseason beginning next Friday(!), the Nationals will have to make a decision on their pitching roster for the second season." - "Could Lannan replace Gorzelanny on postseason roster?" - Byron Kerr, MASNSports.com

• "Manager Davey Johnson has replaced him in the closer’s spot with Drew Storen, but Clippard remains the Nationals’ top setup man and one of their most valuable relievers." - "Tyler Clippard halts his skid with a 1-2-3 inning" - Adam Kilgore, Washington Post

• "Jayson Werth hasn't made any more friends in Philadelphia this week." - "Werth has no hard feelings about Philly" - Joey Nowak, nationals.com: News

• "[Tom] Gorzelanny saw the ball coming down into the bullpen, took off his hat and snatched the ball out of the air. The hat catch set off a wild celebration in the 'pen..." - "A long homer, a nifty catch and an impressive turnaround" - Dan Kolko, MASNSports.com

• "The slow, stumbling and all-around unfortunate racing president has compiled a record of 0-523 since the Nationals arrived in the nation's capital." - "When will Teddy win the Presidents Race?" - Andrew Mollenbeck, WTOP.com

• Kurt Busch: "I'm going to look a new Zen master. I found him: It's Bryce Harper, 19-year-old phenom out of Vegas. ... He's so wise. He told the media, 'No more clown questions. I'm not going to answer any clown questions.'" - "NASCAR At Dover: Kurt Busch Looking Forward to Union With Furniture Row Racing" - Jeff Gluck, SBNation.com

• "Metro riders will have a way to get home after any home Washington Nationals playoff games after LivingSocial agreed to pay for up to two hours of extra service following any weeknight games." - "Nationals fans get late-night Metro ride home" - Kytja Weir, WashingtonExaminer.com

• "So who does deserve to win the award as the league's top pitcher, [Gio] Gonzalez or [R.A.] Dickey?" - "Cy Young for Gonzalez? Not a clear-cut choice" - Nationals Buzz: Marty Niland, MASNSports.com

• "Based on current prices on the secondary market for Nats playoff tickets (hint: high), there will likely be strong interest in this news..." - "Nats will sell standing room only playoff tickets" - Dan Steinberg, The Washington Post

• "Speculation about a looming victory for Teddy Roosevelt has reached an all-time peak, with dozens of media outlets reporting that an October victory for Teddy is in the cards." - "Reader Poll: When Will Teddy Win?" - Presidents Race Fan, Let Teddy Win!

• "I see the Braves winning 2 of 3 over the Mets, the Nats winning 1 of 3 from the Cardinals, and the lead shrinking to 3 games." - "So comes the weekend of doom or joy" - Harper, Nationals Baseball

• "Bryce Harper got the offense going for the Nats with a home run in the first inning, his 21st of the season." - "Nats Lower Magic Number To Three Behind Gio’s 21st Win" - Joe Drugan, The Nats Blog

• Braves: "On the eve of his retirement, Chipper Jones discussed some of the "best of" moments his career, from his most embarrassing moment to his proudest..." - "Jones’ career by the moments" - Carroll Rogers, www.ajc.com

• Mets: "It was all just another unique chapter in the exceptional story of an uncommon man. The same washed-up pitcher who kept dreaming of comebacks in the minor leagues..." - "NY Mets' R.A. Dickey and his knuckleball float right to the top of National League Cy Young award contention" - Filip Bondy, NY Daily News